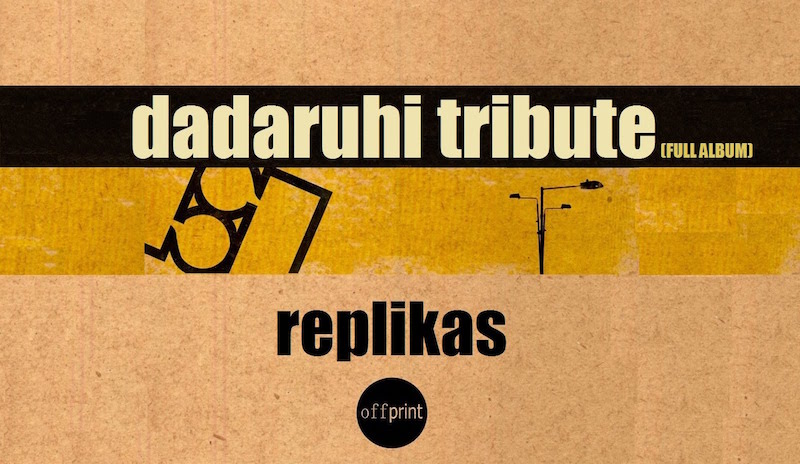 INTERVIEW: PAYING HOMAGE TO REPLIKAS
Istanbul based online magazine Offprint has just released a long awaited tribute album to seminal Turkish band Replikas. The experimental rock quintet began their musical journey back in 1996 and over their seventeen years have produced six studio albums and released a seven song instrumental EP earlier this year, EP No 1.
Utilising arguably the band’s most expansive album, 2002’s Dadaruhi, the tribute spans that album’s thirteen tracks which have each been lovingly and meticulously covered by some of the Turkey’s more well known but also some lesser known independent bands and artists including Change of Plans, Ventochild, Kim Ki O and Chopstick Suicide among others (full list with the tracklist below). Those in the know when it comes to the Turkish independent music scene will already recognise the different genres and approaches enlisted by the band’s aforementioned which fits super nicely into Replikas multi-generic musical character. What is special about this tribute album is the 13 artists have all employed their own unique and different styles in their interpretations of the tracks they chose or were asked to cover.

I was recently in Istanbul and interviewed Offprint founder Cem Kayiran (bass player of Nekizm) and Faruk Geyran, to discuss how the tribute project was born, the process of bringing it to realisation and how its been received.

Indie30: Why a tribute to Replikas?

Offprint: Replikas is without a doubt an influential band in Turkish music history with their numerous albums and appearances abroad. Replikas are also great supporters of the music scene in Turkey and they help out as much as they can for album recordings and concerts for local bands. So a tribute to them, for the things they have done, didn’t seem like a radical idea.

Indie30: Why the album Dadaruhi in particular?

Offprint: I think it’s safe to say that Dadaruhi is our favourite album in the Replikas discography. Also, the songs on the album have hints of different genres. For instance, ‘Yas Elli’  (‘Fifty Years’) has strong oriental melodies whereas ‘Karasaban’ has traces of hard rock riffs and drums. Noticing this was our first starting point basically and the album was meant to be released on the 10th anniversary of the original record but it had to be postponed… (due to the unrest and crackdown in the country over the last twelve or so months – my addition).

Indie30: When did the idea first start and what sort of tribute did you have in mind?

Offprint: We first started talking through this project probably in the spring of 2012. At first we were planning on doing something much more compact. A three or four song compilation that wouldn’t have been officially released but made available on the Offprint website.

Indie30: When you first approached Replikas with the idea, what was their response?

Offprint: Replikas values these sorts of homage activities to celebrate their first records. they released a remastered version of their debut album Koledoyuran in 2010 (and of Dadaruhi this year), so when they first heard of the idea they were thrilled.

Indie30: There are thirteen bands from across many genres representing the thirteen tracks on Dadaruhi and Replikas often defy genre and categorisation. How did you go about selecting the artists to be involved?

Offprint: It was pretty much the same way we go about deciding on who we interview and promote through Offprint. We only work with bands and artists we seriously like and listen to in our personal lives as well.

Indie30: How was the process in getting all those bands on the same page as far as the logistics of the recording was concerned?

Offprint: Since the bands shared the same enthusiasm we did for the project, the overall process was a pleasant one. Some bands chose their own songs to cover and for the others, we requested some of them to play certain songs due to the aforementioned genre associations. We provided a recording studio for the bands who needed it and the others recorded their songs in their own studios. After the recording sessions, we compiled the songs and had them mixed and mastered.

Indie30: What has been the response from the independent music scene and Replikas themselves to the finished product?

Offprint: Prior to the release, we had some difficulties regarding the production of the album. Both Replikas and some friends from the local scene helped us through the process. Other than that, before and after the release, the reaction to the album has been pretty positive and people seemed to have enjoyed the release.

Choosing a track to introduce to you, our readers, was difficult, but I ended up decided on sharing the cover version of the eastern influenced ‘Yas Elli’, from nascent producer Toll Tres, best known for his current work as one half of DJ duo NEONDERTHAL. You can stream that below and check out the original version as well.

The recently remastered version of ‘Dadaruhi’ can be purchased on iTunes here while the digital only Dadaruhi tribute by Offprint can be bought from just US$5 here. Both highly recommended.

From the album, ‘Dadaruhi’, Ada Music.