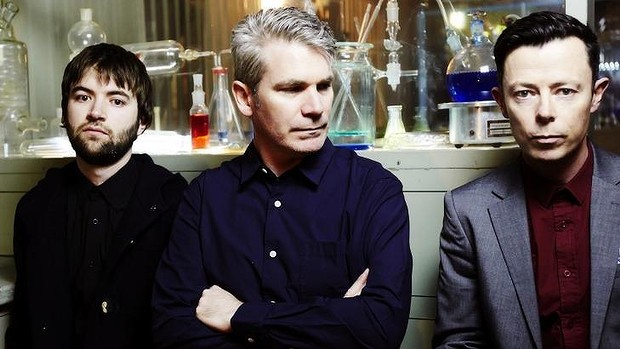 Late last year we interviewed Andrew Coates from Black Cab about their superb new double album, Games Of The XXI Olympiad. The album came in at 3 in our Top 30 albums of 2014 and now word has come through about a four sided vinyl release – just salivating about that. Couldn’t think of a better way to kick off 2015. They ship out in March. Our comprehensive interview with Andrew is below.

INDIE30: I’d have to say straight off the bat, having immersed myself in Games of the XXI Olympiad over the past few days that sincere congratulations are in order. It’s a superb listen. After your first record, you oriented yourselves towards Germany in many ways. Apart from your obvious love of German psychedelic and electronic music, were there any other reasons for becoming so close to the country artistically and otherwise?

AC: We’re always been kind of cultural history nuts, particularly for Europe in the 1970’s, and I’ve always been fascinated by German history, culture and music.  We’re obviously super interested in the period of the ’70’s that spawned Kraftwerk, Neu, Harmonia, Cluster and so on, Bowie in Berlin etc.  But German history and culture in the 70’s is also really interesting – extreme politics (Baader Meinhoff etc), DDR, the birth of the green movement etc

INDIE30: Was this a reaction in any way to what was happening in Australia at the time – have you felt your music has been appreciated here? Do you feel closer to Europe in that sense?

AC: We do feel closer to Europe, certainly more so now than the previous more guitar based line-up.  We never felt like we fitted in to that traditional Melbourne rock sound and we sort of fall between the gaps of the festival scene, being neither rock nor dance, but we do have a very loyal fan base here in Melbourne and we feel very close to the people who like our music and seek it out. We certainly don’t do this for the money which is actually very liberating and keeps you focused on music that you’d feel proud to share with the world and that will stand the test of time.

INDIE30: This album and your last two are heavily influenced by East Germany as a political entity and as a concept. I could surmise and venture many reasons for this as it fascinates me too. But what’s the fascination there for you guys?

AC: There’s something darkly fascinating about a dictatorship with such a massive inferiority complex that they have to have nearly half the country spying on the other half, as well systematically doping their best athletes over a decade to show the world how awesome their political system is.  But that whole national showboating thing is common across the entire Olympics as a spectacle, even to the stupid outfits countries put together to show off to each other.  In 1976 those outfits reach staggering heights of awfulness. And East Germany beat out the US in terms of medals (they came second after the USSR) and Australia totally sucked ass – winning no gold at all.  We find that hugely amusing and slots right in to our ongoing national inferiority complex.

INDIE30: Tell us about the back story behind coming up with the concept for this album, the East German State Plan 14:25 and the Montreal Olympics, and did that concept evolve over the four year writing and recording process? If so, how?

AC: We knew we wanted to do something electronic around a loose sporting theme and the 1976 Games was a logical one to base it around given the DDR’s doping program and our interest in that country after Call Signs.  We also wanted to explore more electronic territory so this also slotted in nicely with the performance enhanced vibe of those games. Once we settled on that theme it kicked off some great inspiration for tracks like Opening and Closing Ceremony, Supermadchen and Kornelia Ender, and we could bring other tacks into the fold through adding some bombastic synths and treatments.

INDIE30: The trajectory of your music seems to follow the same trajectory of the independent German scene of the late 60s and 70s, going from live instrumentation and psychedelic influences towards the employment of motorik rhythms and a penchant for electronic programming. Has this been simply a natural progression or has it been more of a conscious thing? And either way, how does that happen?

AC: James and I have always been big fans of electronic music.  James is a Kraftwerk nut from way back, and I’ve loved weirder UK stuff like Cabaret Voltaire and Throbbing Gristle as well as great German bands such as Neu and Cluster. Once we made the decision to ditch the guitars and go primarily electronic it was quite liberating as we didn’t have to shoehorn guitars over everything as we did previously. We also love strange sounds, drones and treatments and Steve Law is a great one for weirdness and sonic experimentation and he helped shape some early sounds on tracks like Supermadchen, Edner and Go Slow. And we also selected producers who could help us further shape sounds and ideas, like Simon Polinski, Tim Holmes and finally Woody Annison, who’s also a sonic adventurer with great taste and a dark energy that we really like. I guess we did shadow the evolution of those great German bands – and we’ll probably continue further in that vein.

INDIE30: With the embracing of synthesisers and an electronic direction having come to full maturation on the new record, what role did the two singles ‘Combat Boots’ and Sexy Polizei, written some years ago, play in generating the rest of album’s sound?

AC: Both of those singles set the tone for everything else. Sexy Polizei came out of some sessions with the previous more guitar-based lineup.  We worked on a bunch of ideas over two days at Headgap and I hated nearly all of it.  The one track I thought had the most potential was Sexy Polizei and that become the focus.  The other guys (save for James and Steve) hated it. Then we added further fuel to the fire by bringing in Mon Brumby – via Simon Polinksi – to add some gorgeous backing vocals and take us further from what was by then pretty set as a Cab rock sound.  The result was really a template for this album.  Boots built on this further and by then James and I were pretty set on going much further in that direction. That meant the guitars (and guitarists) had to go too as they just didn’t work over the new tracks live. We stripped back as much as we could then rebuilt.

INDIE30: Was a double album always the aim or did that evolve?

AC: James and I stupidly said we’d do the fourth as a double from day one. Like looking at Mount Everest on a postcard and going “Sure – piece of piss.” And once we promised a double, well that was it.  Like a noose around our necks! But we actually had a bunch of tracks that we left off the final album, so fuck Everest – we could have done a triple!

INDIE30: The last two tracks take an ambient reflective almost cautionary note when put next to the exhilaration of ‘Supermadchen’ and ‘Go Slow’ to name two. The high’s and low’s of the doping concept I guess? Was this what you were aiming for in this sense

AC: We always like to mix things up with a few weird, album oriented ambient tracks otherwise things get a little samey samey.  Some of my favorite album moments are weird reflective tracks like Providence on Sonic Youth’s Daydream Nation or The Arm of The Lord on Cabaret Voltaire’s Covenant and Sword LP. Throbbing Gristle were great at this too. You can really push ideas in ways you can’t with a more formal track arrangement, which works great when you have a loose theme to work around.

INDIE30: The sound on the album is absolutely amazing – so clear and crisp, so precise. It’s well known the recording was a long and laborious process with a range of producers and studios enlisted. Could you let us in the reasons for the length of time and the changes in location and personnel and what you were trying to achieve with the recording process and what was it like to deal with and manage?

AC: It took us a long time to find the sounds and arrangements that really worked once we’d ditched the guitars and previous live band members.  We started with Simon Polinski who did some great work for us on early versions of Sexy Pol and Boots and has a great track record with electronica, then did some newer stuff with Tim Holmes in London.  Tim’s work with Death In Vegas was super appealing, and Wes Holland knew him from some work he’s done with the Sand Pebbles.  We got some good stuff done with Tim but some of the arrangements needed lots more work, so we took tracks like Go Slow and Supermadchen back to a live context and danced them up a little to try and get people moving.  Arrangements quickly changed and evolved and Supermadchen for example went from a tame 4.5 min arrangement to the current 10 journey based solely on live experimentation, which we were able to do thanks to great technology like Ableton Live.  Adding Wes in on live drums was also great as he pulled the sound from being pure electronic back to some more rock energy.

The final step was then to take all tracks in to Woody Annison who’s been our go to producer for our best work.  Having spent so long on the album we were getting kinda of lost in it, and we needed Woody’s taste and forcefulness to shape the final work and push the sounds a little harder.  He knows what our sound should be and has a great feel for the studio as an instrument. He also has the balls to tell us when we’re serving him up shit which can be hard for non-producers to do.

INDIE30: It’s well known that independent artists who stay true to themselves and their art aren’t exactly flushed with cash. How does it feel that the record is finally out there now? Were their times you doubted it would surface in the form it has?

AC; We feel great and I think the record stands up well.  The only issue now is how to get it known to people out there who don’t know it exists but would like it if they did.  There are no labels or money in music now so you need to work this distro and promo shit out for yourselves or you’re fucked.  We have some good partners and a great online presence so now it’s up to us to figure out how to break out of Melbourne and get known in some great places internationally.

INDIE30: Any plans for a vinyl release? I’d love it to have pride and place in my collection. In fact I’m positively salivating at the prospect! Are there plans to release the record internationally?

INDIE30: What’s next for Black Cab?

Who the hell knows?  It’s been a strange trip so anything’s possible!

From the album, ‘Games Of The XXI Olympiad’, Interstate 40.