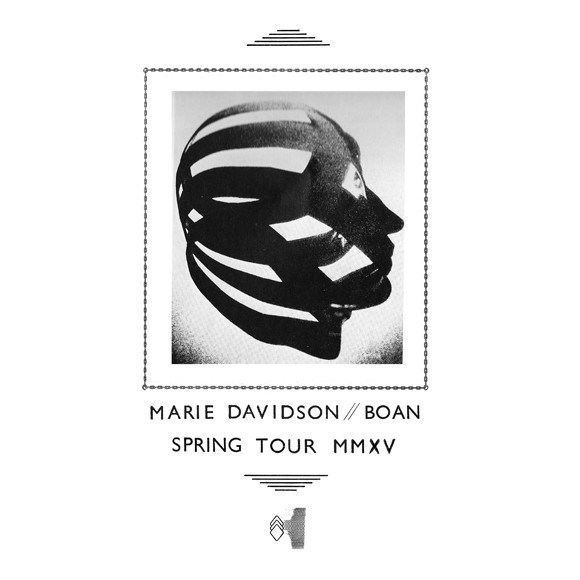 IN PICTURES: MARIE DAVIDSON & BOAN @ THE KNOCKOUT, SAN FRANCISCO
Pinch yourself type coincidences don’t come along very often. A few weeks back Indie30 was sent through Montreal’s electronic experimentalist of the dark arts Marie Davidson‘s amazing new record Un Autre Voyage, which this week has pride of place as our AOTW. Then a few weeks later, I heard news of Austin dark wave duo BOAN’s forthcoming debut long player, Mentiras (to be released in June), and as you can see from the pride of place the title track has at number three in our Top 30 at present, I fell instantly for that too.

I’m currently away from my Australian base in Adelaide for six months and my trip through North America and Europe began on Wednesday, the 15th of April in the amazingly loveable and crazy San Francisco. I further scrolled down the BOAN promo a few days before I left the country and to my amazement both Marie Davidson and BOAN were touring the west coast of the US and Canada on their Spring Tour and were to be in that very city on that first night of my sonic and travel adventures. They have often been on tour together but for me, being from Australia, this was unbelievable. I obviously then high tailed it down to The Knockout within hours of getting off the plane to catch the Holodeck Records signees and was treated to an incredible evening of nocturnal electronic art at its finest.

Marie Davidson took to the stage first and took the small but appreciative crowd through her new record in her inimitable idiosyncratic style exhibiting as she always does deep passion for her craft. Her dexterity and expertise on her electronic ensemble of analog gadgetry was exemplary. Her vocal voyage through her French and English lyrics was something to behold, even if I can only speak a few words of incredibly bad French. The engagement with her audience was minimal but, at the end of the day, unnecessary anyway.

And the linguistic twists and hypnotic aural melodies continued with Austin duo BOAN whose vocals are sung partly in Spanish. Both artists are of Spanish speaking heritage and have been working together for many years in various guises – and the BOAN incarnation has been together since 2012, previously being two thirds of Medio Mutantes. Jose Cota departs somewhat from his work in his more hard arse, deconstructive Ssleeperhold project and his softening of style and playfulness with melody while still maintaining raw power was a mesmerising experience indicative of his ongoing willingness to use his considerable electronic hardware to mix, explore and experiment with different methods and he clearly relished his work. Mariana Saldano’s magnetic and charismatic vocal and stage performance, a mixture of exhibitionism but also of nuanced reservation was pivotal to the experience. She perfectly understands that while she is there to ‘entertain’, the interaction between herself and the audience is a two way street. Both her and Cota played off each other perfectly.

Check out some of my pics of the gig below. As always, what Indie30 is, is a DIY, not for profit blog done for pure love so they’re not of top quality – simply from my phone but I’ve done my best to capture my experience and bring it to you. Thank you Marie, Jose, Mariana and Jon for traversing thousands of miles on this tour to gift us your art, intensely grateful.

You can order and pre-order Marie Davidson’s and BOAN’s new albums respectively here.

From the forthcoming album, ‘Mentiras’, Holodeck Records. Out June 9.