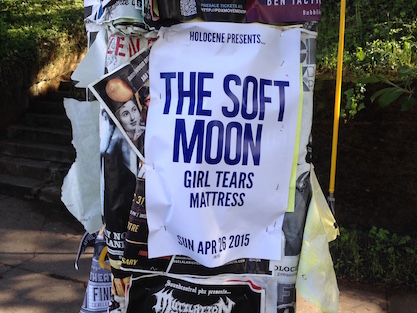 IN PICTURES: THE SOFT MOON @ HOLOCENE, PORTLAND
The Soft Moon, the project of Oakland via Venice via Berlin cold/dark wave electronic musician Luis Vasquez treated the crowd to an intensely powerful set at Holocene in Portland on Sunday night. The show was part of a whirlwind 30 date tour throughout North America and marks the first time Vasquez has played his home state of California for over two years. The band took the appreciative audience through a mind tripping journey of mood and atmospherics as the band ploughed through, at almost breakneck speed, tracks from the lastest record, the European recorded Deeper, as well as some earlier tracks from Zeros. The mastery that Vasquez has over his craft vocally, electronically and on guitar, three things he mixes with ease and the disciplined virtuosity displayed by his touring bassist and drummer were a joy to behold. I managed to view the show stage left behind the drummer and was left in awe. Such power!
Below are some pictures of the night along with the setlist and the remaining dates of the tour. There’s also streams of his latest singles from the album, the ultra dark and in your face, ‘Black’ and the more melodic searching “Feel’ below. The awesome new album, Deeper, is out now on Captured Tracks. Get it here and the vinyl repressings of Zeros are available now too.

Friday, May 1 – The Casbah, San Diego

Tuesday May 5, The Opolis, Norman

From the album, ‘Deeper’, Captured Tracks.

From the album, ‘Deeper’, Captured Tracks.