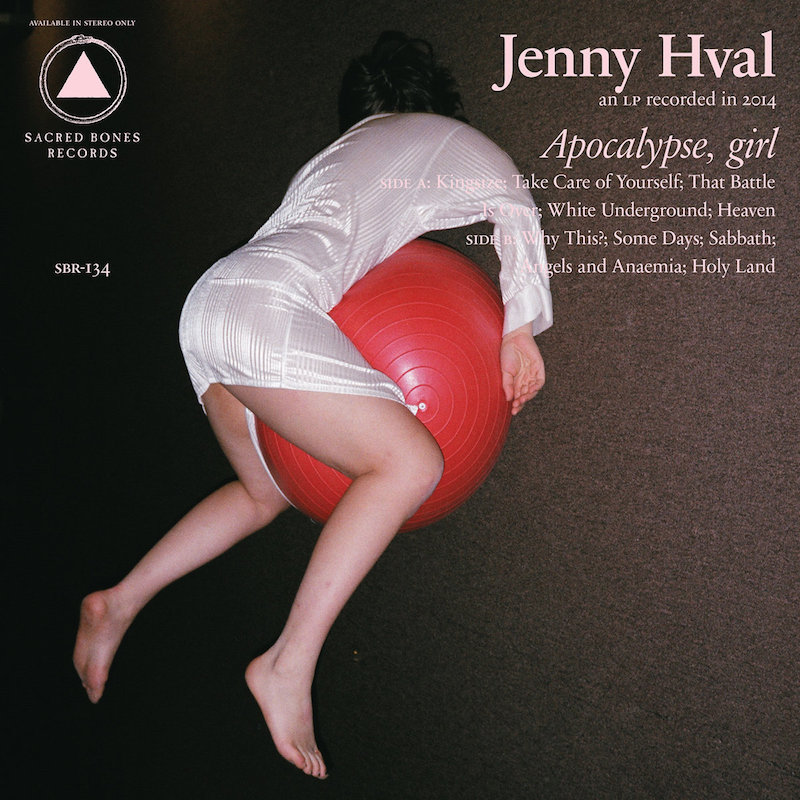 Norwegian experimentalist and self admitted “outsider artist and writer”, Jenny Hval takes on everything from religion to politics, sex and sexuality and employs surrealist images to represent her representation of complexity and the indefinite on her fifth full length and third under her own name, the brutal, Apocalypse, Girl. It’s an intensely thoughtful and intelligent collection of tracks that won’t be easy for many to digest, the heartfelt honesty piercing through in stark fashion.

Hval also employs visual art like vignettes which appear on the record as dreamy like soundscapes, and noise like visions, ‘White Underground’, ’Some Days’ and the ten minute closer ‘Holy Land’ cases in point. But the aforementioned surrealist complexity is represented by some most easily accessible moments, on the surface anyway, the sassy, noir like, yet withering social commentary of ‘That Battle Is Over’ and the electronically celestial, yet ascerbic like ‘Heaven’.

In a musical sense, Hval and co. wander effortlessly employing elements of folk, pop, trip-hop and drone and it’s arguably the best her vocals have sounded representing the cerebral like lyrics in recognisably emotive ways. You can sense the feeling of foreboding, the sense of nostalgia and the intense interest of watching from outside herself in those tones. Indeed, Hval has made the point that how to express her writing through song presents a serious challenge, one she almost agonises over. That hard work comes through very clearly throughout the record.

And don’t confuse the overt song titles for any sort of religious fervour. They simply record Hval’s connection to Norway’s bible belt when she was young. She’s far too intelligent to be of a religious bent and anyone familiar with her past work would render the need to say that impotent. She is a voyeur in every sense of those subjects aforementioned but at times embraces her subjects, like Mette Moestrup’s metaphorical banana as soft dick that straddles the first two tracks, in intimate, yet still distant ways. And on the subject of politics, Hval states those who are outsiders or of a left bent have their own personal reasons for finding that reassurung space but that doesn’t mean we aren’t weak when it comes to the witheringly powerful commercialism and consumerism that is omnipresent.

Apocalypse, Girl, despite Hval’s aversion to calling herself an artist is a true work of art in every sense, lyrically, musically, visually and intellectually. One that makes us truly ponder the insides and outsides of living with our simultaneous certainties and uncertainties. The album is out next week on Sacred Bones. One of the best of this year. Of that there is little doubt.

This video for ‘That Battle Is Over’ directed by Zia Anger and featuring Cornelia Livingston and Melissa Auf de Maur is the perfect representation of not only the subject matter of the track but the surrealism that abounds on the record. Watch it below and enjoy another track, the beguiling ‘Sabbath’.

That Battle Is Over