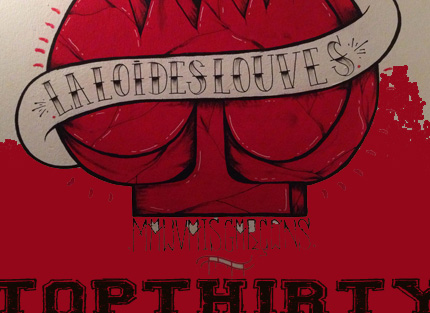 Swedish pop saboteur Molly Nilsson heads the new entries at 13 this week with the track we featured yesterday, ‘1995’ from her forthcoming new album, Zenith. Just one place behind is FKA twigs with the brilliant middle track, ‘In Time’ from the equally brilliant new EP, M3LL155X. We’ve included her whole video extravaganza below but for ’In Time’ go straight to the 7.10 mark and listen until 11.45. Deerhunter are back with a new album in October, Fading Frontier; the single, ’Snakeskin’ is at 18.

Joining these three tracks is the first track to be released from the forthcoming album, It’s You from Melbourne post punk outfit Gold Class. We’ve been sitting on the frenetic ‘Life Is A Gun’ for some weeks but with the album out in two weeks time, this was the perfect opportunity for it to make its entrance. It’s at 23 and is available as a free download.

The next entry is from the new single from Magical Cloudz, the emotive, sleeves laid bare project of Devon Welsh and his musical collaborator Matthew Otto. Their last record, 2013’s Impersonator was a standout of that year and on the strength of the towering ’Silver Car Crash’, the new upcoming full length, Are You Alone, out October 16 is set to do the same in 2015 . That’s at 25.

Last but not least is Orlando’s Saskatchewan at 29 with the readily effective dreamer, ‘Delusive’ . Try getting that three chord hook out of your head. Impossible.

Huge moves into the Top 10 for two young Australian acts this week. Melbourne’s Arbes climb straight  to 7 with ‘Beach Side’ while Brisbane’s Lastlings hit to the Top 5 with ‘Verona’.

Ought remain at number one with ‘Beautiful Blue Sky’. FKA twigs, Magical Cloudz and Saskatchewan tracks are streaming below, all details for all tracks here and all 30 tracks are also streaming in our Top 30 player.

From the forthcoming album, ‘It’s You’, Spunk/Felte. Out on Sept 4.

From the forthcoming album, ‘Are You Alone’, Matador. Out October 16

From the single, ‘Delusive’, Self Released.