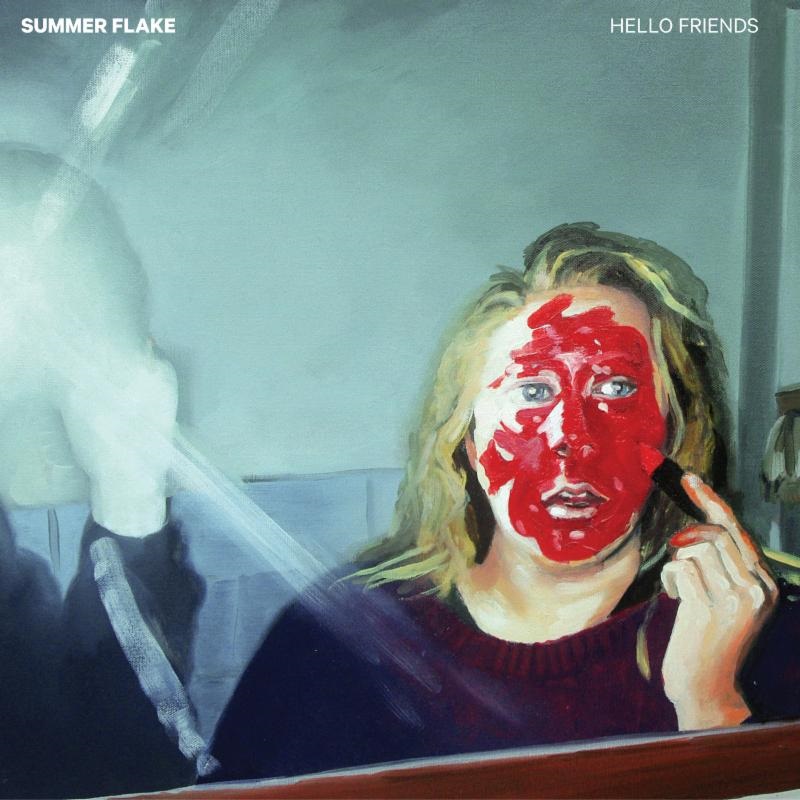 Two or so years ago Stephanie Crase packed up her music toolkit and left her home city of Adelaide for Australia’s independent music hub Melbourne. After releasing her first LP in 2013, You Can Have It All, she took her Summer Flake moniker and thankfully, the veritable shit load of musical ideas and odds and sods she’d stored away on her phone and computer to the Victorian capital and begun painstakingly sorting through and assembling them into song, some appeared on the Time Rolls EP she released in 2015 while others with ideas anew became the vital 10 tracks that would make up the stunning Hello Friends. Once written, she enlisted James Mannix on drums, Sarah Chadwick on bass and employed the production chops of Geoffrey O’Connor. She recorded it in its most basic form at her home in Thornbury and the laid down the bass and drums with Mannix and Chadwick at Headgap before taking it to O’Connor’s new (and freshly painted) Vanity Lair studio in inner Melbourne.

Crase’s writing and style evokes a 90s feel without wallowing there. So many bands employ a virtual echo of what was happening in that decade and pass it off as new. That is certainly not the case with Hello Friends and it is the lack of assumption and humble disposition that accompanies Crase’s approach to both composing and executing that is the essential difference. Simply, while her influences are reasonably clear, nobody else could have written these songs and nobody else could of made them into the appealing yet understated gems they are.

‘Son Of A Gun’ starts off loosely and unassumingly and gradually builds until Crase lets loose with a raucous guitar outro while first single, the pensive and disciplined ‘Shoot & Score’ is a grunge inspired masterpiece, with intelligently crafted and executed guitar melodies welded together with subtle lilting bass and a hypnotically lagging beat playing out over the top of Crase’s harmonising vocals. ‘I’d Ask You Not to Look Away’ is born of defiance lyrically in its first half but just as she’s got your attention she’s says no more, no need to – it’s been said. This is indicative of Crase’s penchant for a less is more approach throughout the whole record and an example of how she’s become so much more content with who she is.

‘Make Your Way Back To Me’, one of the album’s standouts sees Chadwick’s winding bass used to full effect as Crase’s tremlo gets a full workout. Her exquisite vocals here play a crucial role and they take on a number of different hues throughout from modest to determined and everything in between. ‘Tumbling Down’ sees Crase on her own strumming an acoustic guitar to gorgeous effect while the painstaking attention to her compressed layered vocals blends effortlessly with the cascading and beautiful melodies on the epic ‘So Long’ which somewhat its weary lyrical content. It’s like Crase is definitively leaving something behind.

Second single, ‘Wine Won’t Wash Away’ increases the tempo dramatically and according to Crase is the closest to power pop Summer Flake have ever come and serves to illustrate the unsettled, confusing nature of alcohol fuelled party hopping never quite certain where you’ll end up or how things will turn out . ‘I could hit the ground’ Crase refrains. ‘Satellite’ is subtle and hypnotic with its end chord serving the entire song and reflects Crase’s fraught wish to be away from it all. ‘Look How Far We’ve Come’ sports a half distorted little melody that appears a third of the way through where you’d expect it to be a bridge. It serves to break up the slow nostalgic regretful feel that characterises the track’s first half. But as the title suggests, it doesn’t stay there as the melancholy slowly lifts. ‘Mess’ closes out the album back in that melancholic fashion and Crase has stated that she was determined not to end the album with any sort of triumph. Nevertheless though, there’s hope in those chords and Crase’s vocals also serve to lift the horizon.

Ultimately Hello Friends is about songcraft, about curating a myriad of moods into sounds with a cohesive meaningful whole. And it is the utilisation of space that allows these moods to flow effortlessly to the surface. Crase is a superb guitarist, not only in execution but also in knowing how and when to apply the instrument in a songwriting sense. She never allows it to overpower even though it is front and centre at all times. The accompanying rhythm section and her appropriately restrained yet effective vocals play crucial roles here as they provide just the right amount of sonic ingredients to allow the guitar to almost retreat at times. Hello Friends illustrates that Crase is not only a fine guitarist but has also developed into the finest of songwriters.

From the album, ‘Hello Friends’, Rice Is Nice.