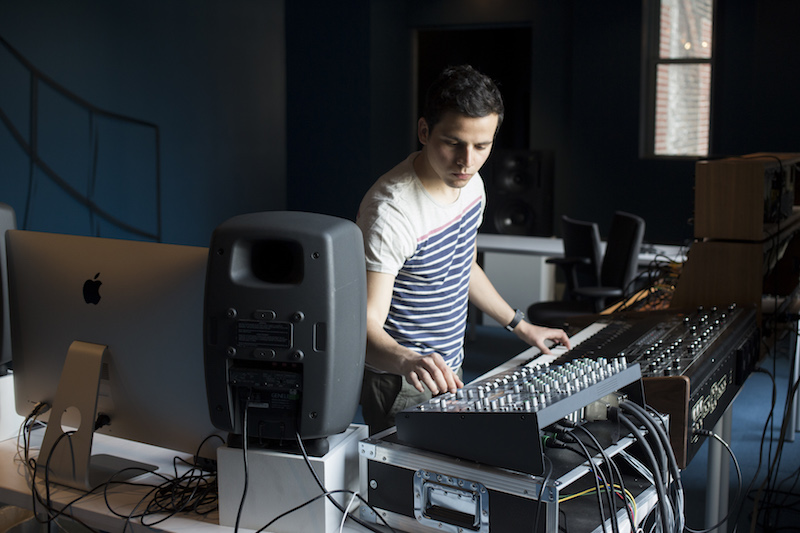 You might recall we featured the rather excellent debut EP, Live In Dreams from Seretan, the project of Özcan Ertek earlier this year. We recently sent across a few questions to the Istanbul electronic experimentalist about his musical career thus far, the influences and processes behind the EP and the state of being a progressive artist in increasingly conservative Turkey today. His answers are as complex and illuminating as his music.

Indie30: This is your third solo incarnation after soundcollage and Jungleskin. What sets Seretan apart from your previous work?

Özcan: soundcollage is a solo ambient project that explores loop based sound elements with analog pedals. It’s about making ‘drone songs’. Jungleskin is mostly about primitivism and contains primal rhythms and layered hymn-like vocals. With Seretan, I wanted to explore more abstract rhythms in and the chaotic ambience of different environments like new club-friendly environments.

Indie30: I know you listen to a lot of different styles of music, from straight pop to more experimental tones. Of these musical influences, what would you say inspired Live In Dreams?

Özcan: My personal style is drawn from a mixture of elements from both ambient/electronica and house/techno music. I try to explore new ways of examining the traditional separation between experimental and popular(electronica). On the other hand, ‘Live In Dreams’ is mostly about structuring space. I began by using textures to examine the various practices of musical space. Feeling and space collectively constitute “ambience’’ on this record, and this is the main idea!

Indie30: How much influence has being an alumni of the Red Bull Music Academy in New York had on your music? I’m also curious to know what that experience was like, not only in a musical and production sense but also from a personal one too being in a city such as New York.

Özcan: Trying to achieve certain characteristics in music is always exciting. Being able to diagnose and analyze these characteristics can guide on a profound exploration of music production and performance and it can influence the approach in which original content is arranged, generated and performed. At the academy, I saw that my friends from different countries have adopted various techniques to enable a fuller range of their musical expression. It definitely affected my music. For example, participants from UK have definitely different perception of bass elements in music. That was exciting.

Indie30: Apart from the Red Bull experience, how much effect has your university studies in sound engineering had on your work. Do you try and separate the academic from the everyday? Is the immersion in the academic side of things more of help or a hindrance when it comes to the art of songwriting?

Özcan: Music from certain genres has its aesthetic qualities. Although the arrangement of the electronic and electro-acoustic music differs, both result from the combination of the timbre, space and musical object. In university, techniques such as sound synthesis and spatialization have opened up new compositional approaches for me, based on the processing of individual sounds. I blended the spatialization discipline of electro-acoustic composition as well as experimental/electronica music. But I also feel that academic forms have too much contrast in their character and they differs with lots of my formal ideas.

Indie30: With Turkey at some sort of crossroads presently in a political and social sense and involved in a vital, but seemingly one sided battle between secular modernity and progressivism and regressive religious traditionalism and conservatism, how much of living within that dynamic seeps into the writing and development of your work?

Özcan: Taking the social and political turmoil that surrounds my daily life in Istanbul into consideration, I am experimenting with and reflecting on a multitude of different social dynamics, political engagement and state violence. The question is, how can an artist reflect, especially on situations where a lack of security, displacement, trauma, violence and sheer fatigue are dominant? Right now in Turkey, an artist’s challenge is how to live with pessimism, how to keep on creating work in relation to that pessimism and how to process the possibility of liberation despite being exposed daily to horrifying news.

Indie30: In a cerebral sense, you’ve often spoken about seeing your work as one that marry objects of sound with site specific physical sensory experiences. Live In Dreams certainly feels like that at times.

Özcan: Yes definitely! I encode the data patterns and gestures in sound where particular aspects of which can be decoded by the listener through corporeal imitation. The translation of abstract phenomena into sensory experiences interests me since it engages new interactions between the original site of the experience and the audience.

Indie30: The gestation (release) period for this EP was a long one. Was this a compositional, production or label thing or something else entirely?

Özcan: Both. I certainly wasn’t in a hurry, I took my time. After I decided to do something, it also took time to create relations between my intentions and actual sound output. In the compositional process, a lot of musical attributes were interchangeable. Observation of these aspects and creating meaningful musical articulations and forms take huge amount of time!

Indie30: There’s definitely an almost ominous, quite dark and submerged feel to the EP. The title track feels like you’re almost drowning in something…

Özcan: Yes, I agree. This is also the feeling I would like to give. I reflect the forms around me. The ideas of composers like Cage and Schafer, as well as Varese, Russolo and many others, are both an invitation to hear the sounds around us as music, but also to use them as material, to incorporate them into our compositions. I wanted to use that idea in a different way. The individual elements are mechanical, yet as a whole “The Open Door” feels utterly natural.

Indie30: What inspired ‘Ghost In My Head’. It’s arguably the most straight ahead dance oriented track you’ve written?

Özcan: According to Jung, the shadow is the unknown dark side of the personality. Even though I can’t entirely understand my shadow, I can feel that its changing. I can reflect on it with music and ‘Ghost In My Head’ is exactly about that!

Indie30: The final two pieces on the EP, the gleaming interlude ‘It’s Still You’ and the organic field sound inspired ‘Open Door’ are rather short in length. How did they both come about and was there a deliberate reason for their brevity?

Özcan: When I was composing Live In Dreams, I was also discovering the track structures. ‘It’s Still You’ proposes a collage of textures. I reflected on my memory and experience of dreams. I used delays, reverbs and disorientation to distort the sense of time, direction and recognition of sound events. Maybe because of this dream-like structure, it’s short. I also felt that introduction should be short like an invitation for everyone to listen to the EP. Title ‘The Open Door’ also emphasises that idea.

Indie30: In a production sense, there is almost a murky feel. Given that the title track and ‘Ghost In My Head’ are rather slick in style, was this a deliberate attempt to try and muddy the waters (scuff things up a bit)?

Özcan: ‘Live In Dreams’ is about dreams, faraway landscapes, uncertainty and memory. That’s why, production wise I try to make emphasis on a dark and muddy aesthetic.

Indie30: What’s it been like replicating the tracks live? Can you enlighten us on what is involved in this process?

Özcan: In ‘Seretan’ performances, I mix the outputs of the Korg Kaosspad KP3 sampler, MS2000 synthesizer and Korg ESX drum machine. There is also a drummer to enhance the sense of presence and “Liveness” in concert. Utilizing the laptop digital audio workstation with drums, we rely on the krautrock aesthetics and try to negotiate emerging technologies by externalizing the digital software interface through MIDI and hardware controllers, thus (re)creating a sense of “liveness”.

Indie30: What’s next for Seretan?

Özcan: I’ll keep on making music and releases. I’m also planning a Europe tour right now! I want to share my vision abroad. I am also planning on releasing a follow up EP in October.

Seretan’s Live In Dreams EP is out now digitally on Partapart Records. Stream it below and buy it HERE.