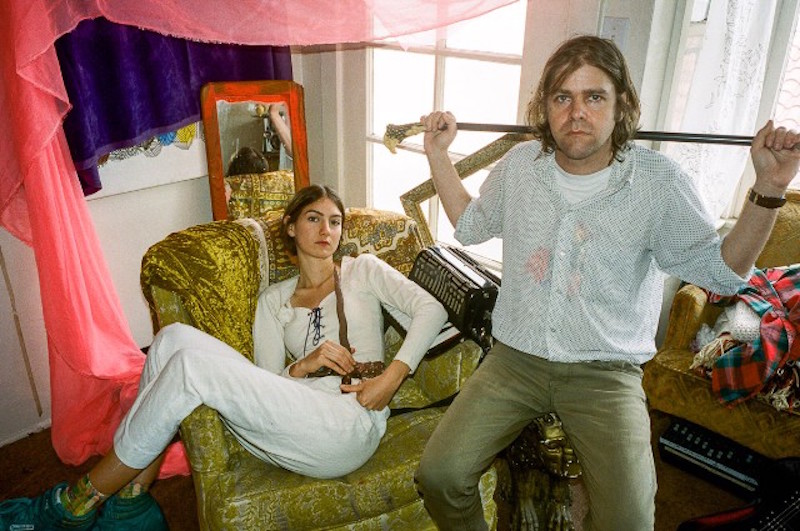 Last week the long awaited Weyes Blood (Natalie Mering) and Ariel Pink (Ariel Rosenberg) collaboration, Myths 002 surfaced, part of a series begun by Mering’s label Mexican Summer around the Marfa Myths festival in Texas. Its a winner in every sense with both artists contributing their uniquely oppositional yet strangely complementary musical dispositions in an oddly unitary way. On the odd side, one would expect nothing less from Pink with his progressively left field pop but Natalie Mehring’s golden voice and folk stylings fit with and add to Pink’s twisted encyclopaedic musical knowledge like hand in glove.

Close friends for a number of years, the coming together between the two American West Coast artists officially began when Mering contributed guest vocals on Pink’s 2013 record Mature Themes and Pink produced Drugdealer’s ‘Suddenly’ from last year which featured Mering. Beginning with the Pink led prog-pop-folk mash up ‘Tears On Fire’, which you can check out below, finds them both in fine form, tongues firmly but respectfully in cheek. Pink with his soft vocal hues voluntarily and suddenly eviscerated by Mering’s massive choral interjection. ‘Daddy, Please Give Me A Little Time’ is a gorgeous off kilter Mering plea while ‘Morning After’, another Mering led track, positively gleams despite lyrical regret and sways in hypnotic fashion with it’s simple tambourine led beat. The final track is a Pink sung live cover of UK goth band Sad Lovers And Giants that enlists the talents of Connan Mockasin and Andrew Van Wyngarden (MGMT).

Myths 002 is available here while Weyes Blood return home from an Australian and New Zealand adventure and resume touring from February 16 in San Diego, during which Mering and her band will take in the aforementioned Marfa Myths Festival as well as a slot at Primavera in June.