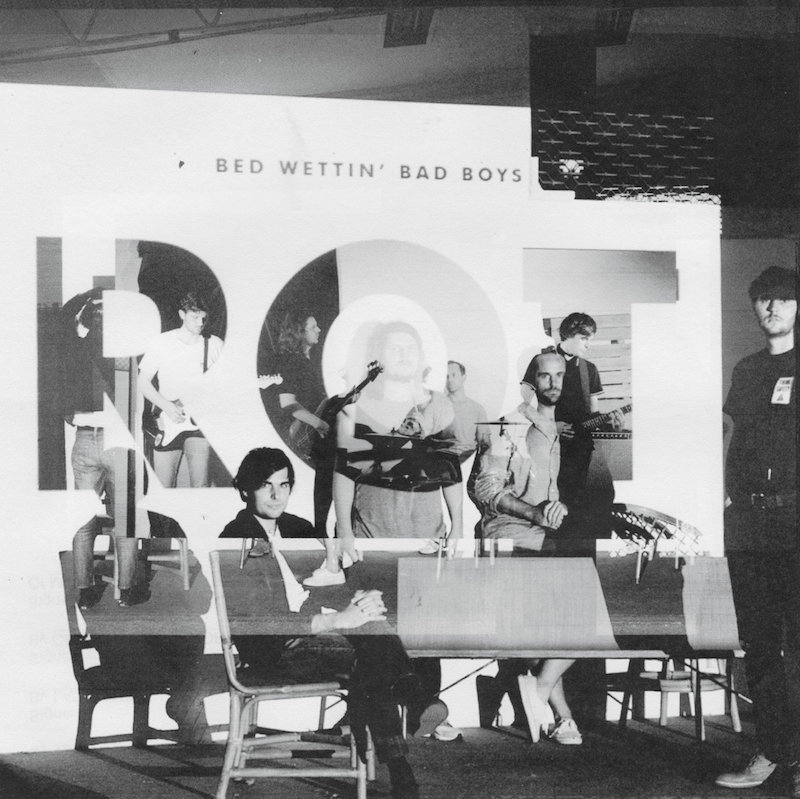 Sydney “(fuck) success” rock band Bed Wettin’ Bad Boys have just released their first record in four years.  And unsurprisingly with the usual wry self-deprecation, they’ve titled it Rot, a description which in truth while humorous is itself a load of actual rot. Despite their amusing efforts to state otherwise they’ve again produced a very, very good record, one which is as cohesive as its is consistent, a relentless, rough and ready ride chock full of powerful driving rhythms, hard arse riffs, legacy leaving hooks and convention fucking lyrical honesty delivered with a voice that is as earnest as it is insistent.

In terms of time, Rot took two or so years from the making to the releasing. In fact, most of its 11 tracks were written and recorded live over two years ago. So why the delay? Who knows but it’s not really surprising when you consider the band has never considered themselves important enough to be myopically focused about anything. And nor is it surprising given the fact that people in independent bands who don’t have their heads stuck up their own arses actually have real lives to lead and real jobs that have to somehow pay. Shit, they could even have other things going on in their lives, things that could be even more rewarding than…er…being in a band.

That said though, frontman Nic Warnock has accepted that their 2013 debut LP Time For Boredom represented a departure for the band of sorts in that they naturally started turning away somewhat from what they excelled at focusing on – a contentment with fucking up, musically and socially and at life in general. While the overall approach to the songwriting on Rot is similar to its predecessor, its becomes quickly apparent that slightly more attention has been paid to outcome this time around (fuck, I hate than word!).

While the rough hewn edges are still there and always will be, Rot boasts a more sharpened sound and presents more diffusely in its overall mix. The sum of its parts are more pronounced with guitars more layered and the bass sound, while still acutely prominent, is leaner but loses nothing in muscle power. This is very much apparent in the sound from the get go as opener ‘Away’ is instantly louder and wider in its scope setting the tone for what is to come, a tone often applied at breakneck speed. The infectious twin melody driven ‘Stunned’ gives way to a kick arse guitar outro and alongside the latest single, the three year old ‘Plastic Tears’ with its insanely good vocal hook centred within an emotion charged chorus – are the best two tracks on the record – the 1-2 punch. ‘Work Again’ is more than eminently danceable and its shimmy inducing bass runs will get any arse to groove while achieving it differently so does the pounding inversion realised by its punk predecessor ‘Expanding Horizons.

The angular fullness but measured pace of ‘Device’ the wistful contemplation evident on ‘Thing Called Love’ and the nostalgia present about and around the most circumpect track on the record ‘Victoria’ give the impression that despite the chugging pace, time and space in the arrangements is centrally valued. Indeed, on an album like this, they are indispensable. And they are there in spades on the layered twists and turns served up on their closing seven minute rock opus ‘Turn The Page’, which is not indicative of the ability they’ve always sought to downplay but gives total lie to the album title.

Whatever the Bed Wettin’ Bad Boy quartet do from here and how long they take to do it is anyone’s guess. But what is certain is that in Rot they have not only equalled the thrilling ride achieved by their debut LP but have surpassed it in both shape and form. And another certainty in the wake of Rot is they will have an even harder time trying to dismiss their musical achievements rather than actually accomplishing them. Having said that though, I’m safe in the knowledge that it always be a joy watching them try.

Watch the video for ‘Victoria’ and if you haven’t heard it yet listen to ‘Plastic Tears below too. Rot is out now physically on vinyl in Australia and New Zealand through the band’s own R.I.P. Society Records here, through What’s Your Rupture in North America there and through Agitated Records in Europe here.