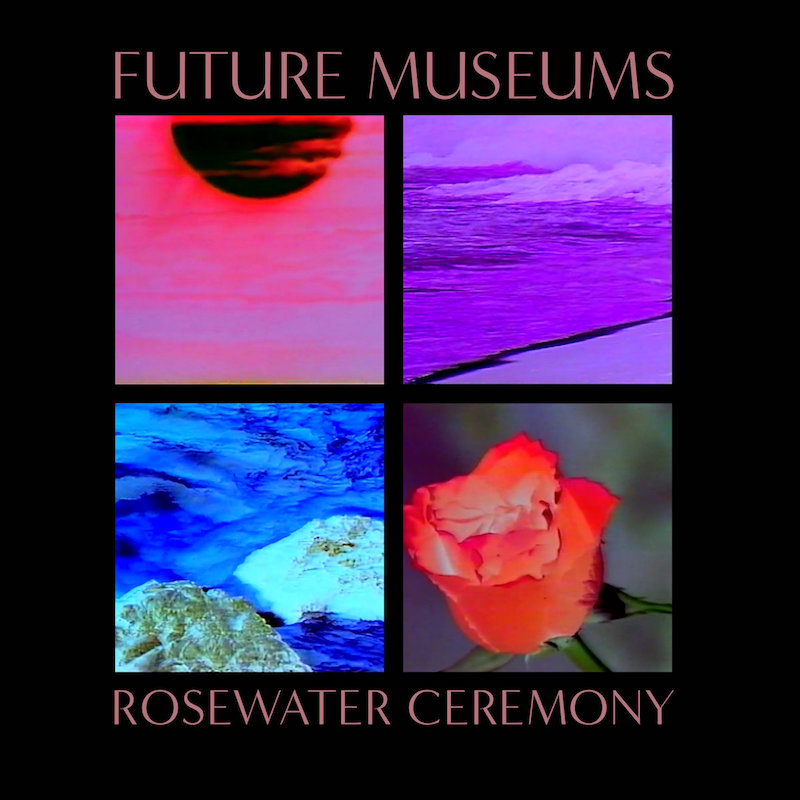 One of the many pleasing and lasting markers that has characterised independent music culturally over the last two decades has been its tendency to embrace patience and the compositional long game. It has seen a multitude of artists and bands create a plethora of amazing experimental and instrumental releases. This has coincided with an healthy increase in independent record labels founded by or serving close knit communities all around the globe dedicated to challenging themselves and pushing musical boundaries, making music as art first with commodity a clear and distant second. Among a number of labels and communities who have created and provided a home and a platform for the work of these artists is Austin’s Holodeck Records and the diversity and quality of their releases never disappoints.

The first full length release on the label this year is Rosewater Ceremony from Future Museums, the project of multi-instrumentalist Neil Lord, who has been quietly at work composing and performing his ambient mix of guitar, synth and effects driven music for a number of years, along the way dropping quality solo releases across a multitude of labels (Keeled Scales, Fire Talk, Mirror Universe et. al). To underline his prolific nature, despite 2018 being but a month old, Rosewater Ceremony is actually his second album of the year already after Visible Nest surfaced in the days following new year. While Lord is also an intrinsic part of the musical family that spawned Holodeck namely through his major role in Thousand Foot Whale Claw, this is interestingly his first solo release on the label he part owns.

Rosewater Ceremony is an ultra immersive yet readily accessible journey, one that both inviting and hospitable, cosmic yet earthy. That’s not always the case with ambient, new age, kosmische and experimental music as the process behind the creation of such is often by its very nature an intensely personal experience which can often take composition down paths difficult for many to navigate. Even though Lord is still inhabiting a creative space of his own choosing with every step taken here he seems to be not only be opening that space up but insisting on a dialogue of sorts.

Each of the nine tracks have been meticulously written, delivered and recorded with special attention given to the final mix by producer and artist Dylan Cameron. Lord insists that in every moment in every track, every instrument, every effect used must fit together hand in glove not only structurally but also in tonality. Here, texture is everything. Witness the deceptively simple ‘Cosmic Winds Reprise’, it rests on the idea of one bass synth chord change with the focus seemingly on how the change sounds rather the held sound of the two chords themselves on either side, on the journey rather than any destination. One could contentedly float in that chord change forever. And the beauty is in the evenness of composition and production, even the dissonance present is carefully measured in its delivery as witnessed by the restraint applied on otherworldly opener ‘Aura Display and the quietly relentless semi-techno like ‘Natural Pulse’. It even becomes intertwined with a tinge of submerged shoegaze on ‘Rage Of Progress’.

Apart from the fact the album invites accessibility and welcomes its listener with open arms, another aspect you immediately notice is the sense of freedom that is omnipresent in both tone and mood with even its low end evoking a sense of disarmament free of any feeling of foreboding. And its a knowledgeable freedom, one that doesn’t rest on the esoteric or the unlikely, nor eschew reality. You get the sense that in Lord’s world, his idea of composing new age inspired music is an earthy idea with solid foundations but without rules. It’s not about blindly following the latest self-help fad or sticking your head in the sand in an attempt to eschew negative vibes. Its about the contentment that comes from reaching explorative understandings and feeling safe in the knowledge that you can be aware and know without needing all the answers, without needing at all. That feeling is heightened in the gentle and knowing outward gaze that permeates ‘Hang Low Moon’, in the delicate oscillation present on ‘Rebirth of Empathy’ and in the whispered vocal on its meditative extension. Overall, Rosewater Ceremony’s undoubted circular character doesn’t deal or trade in end points. There are only mere pauses.

There are no corners cut and no half measures in the musical world of Neil Lord. His ability to focus down and do the compositional hard yards have enabled him to cross over from the personal, reach out and connect on his own terms. And purveyors of this craft wouldn’t have it any other way. This is no better evidenced than by Rosewater Ceremony’s ability to render the out there, the strange, the odd, the other as soothing, as safe, as familiar, as pleasure. This is music of the giving kind. And its the kind of giving that expects nothing whatsoever in return.