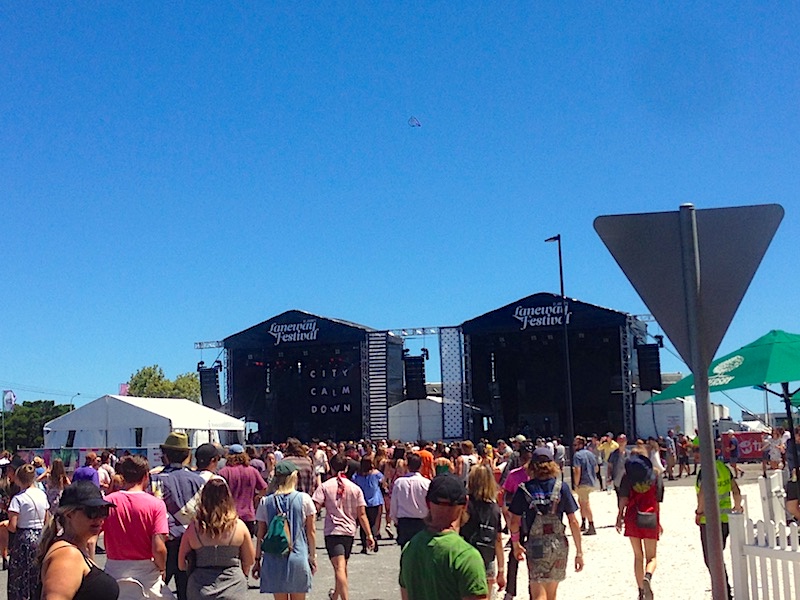 With the St. Jerome’s Laneway Festival wrapping up in Fremantle on Sunday, its two week long music odyssey that began in Singapore and rounded Australia via New Zealand has again proven, alongside the Golden Plains weekender, why it remains the most relevant, vital and diverse independent music festival in Australia. Since first witnessing the festival at its Adelaide debut in 2008 and reflecting back on the years since, its musical curators have given us much to satiate our love for the independent, eclectic and diverse in music. Going back over its annual line-ups reads like a multi-faceted who’s who of the independent music world, always fresh and new, always contextually relevant and always downright fucking vital. In fact the esteemed list is all the more impressive given, as a country we’re often a bridge too far geographically and financially for some lesser known independent artists to cross and that bridge spans further if you’re based in Adelaide as we are. 2018 marked the 9th Adelaide Laneway for us, the fourth at Port Adelaide’s Harts Mill after five at the Uni SA City West Campus (2008-2013).

Music is an incredibly personal thing and after being a little underwhelmed by what was offer last year, this year was a major return to form in curation for us. The undoubted highlights for us involved the gloriously insightful decision to enlist the presence of Aldous Harding and Moses Sumney, who along with Father John Misty, delivered exceptional records in 2017. Their appearance speaks volumes for what the festival stands for and highlights its determination to bring intimate artistry to the festival space rather than appease short attention spans, churn turnstiles and amass coin. The decision to program them without overlap so all three sets could be enjoyed in full was very much appreciated by this fan.

The stupendously good Harding had the knowledgeable late afternoon crowd in an internally rapturous state. Her incredible vocal performance and piercing gaze sat commandingly together atop a set of spartan but beautiful composition from both Party and her self titled debut. Her emotional, rarely played live, closer brought the tears flowing and after such an emotionally draining experience time was needed to digest and recover. This had to be delayed though as just ten minutes later Moses Sumney’s began a performance that was electric as it was eclectic. His canny and honest songwriting always allows space for change up and improvisation. To this end, the groove inspired rendition of ‘Lonely World’ provided a thrilling finale. While J. Tillman seemed a little flat with seemingly the shithouse state of the world on his mind, there was still much to be impressed about the laconic from the idiosyncratic Californian.

Playing the main stage ridiculously early was Melbourne quintet Rolling Blackouts Coastal Fever who did their best despite the small crowd. Not that there wasn’t artists worth seeing, it was the first of only two forays to the main stage for us as the bulk of what we were there to see occurred in, as always, less populous settings. It wasn’t to be visited again until The War On Drugs euphorically closed out the night despite some unfamiliar with Jason Granduciel’s emotive back story and holding pattern musical style being unimpressed by the introspective beginning. The frenetic truth telling misogyny slayers Cable Ties led by the just force of Jenny McKechnie was another highlight as was English/Icelandic trio Dream Wife who shoot the same determined breeze. Alex Cameron‘s set was serviceable but was unfortunately marred by its early time slot and sound problems at the newly minted Future Classic stage, moved indoors this year. By the time electronic duo Kllo graced it with their ever improving live aesthetic they’d thankfully been ironed out. And finally, the festival’s late decision to invite Austin electronic quartet S U R V I V E made this little punter and a small band of retro futurists very very happy but it was disappointing to see the casual observers around us give them little chance and short shrift.

Founders Jerome Borazio and Danny Rogers always intended something different for Laneway when 1400 people crammed into Melbourne’s Caledonian Lane in 2005. Since then the festival has played a vital role in lifting the artistic quality of an Australian festival landscape which features many events which began with a similar ethos but have turned into commercial monsters owned by American “entertainment” conglomerations where quality independent international artists of vitality get ignored more often than not. Thankfully Laneway has never subjected its audience to a wheel out of the tried and tested whose long past glories seem more important than anything else. As long as it keeps gifting us line-ups like it did this year, it will be a festival always retain a special place in these beating musical hearts.