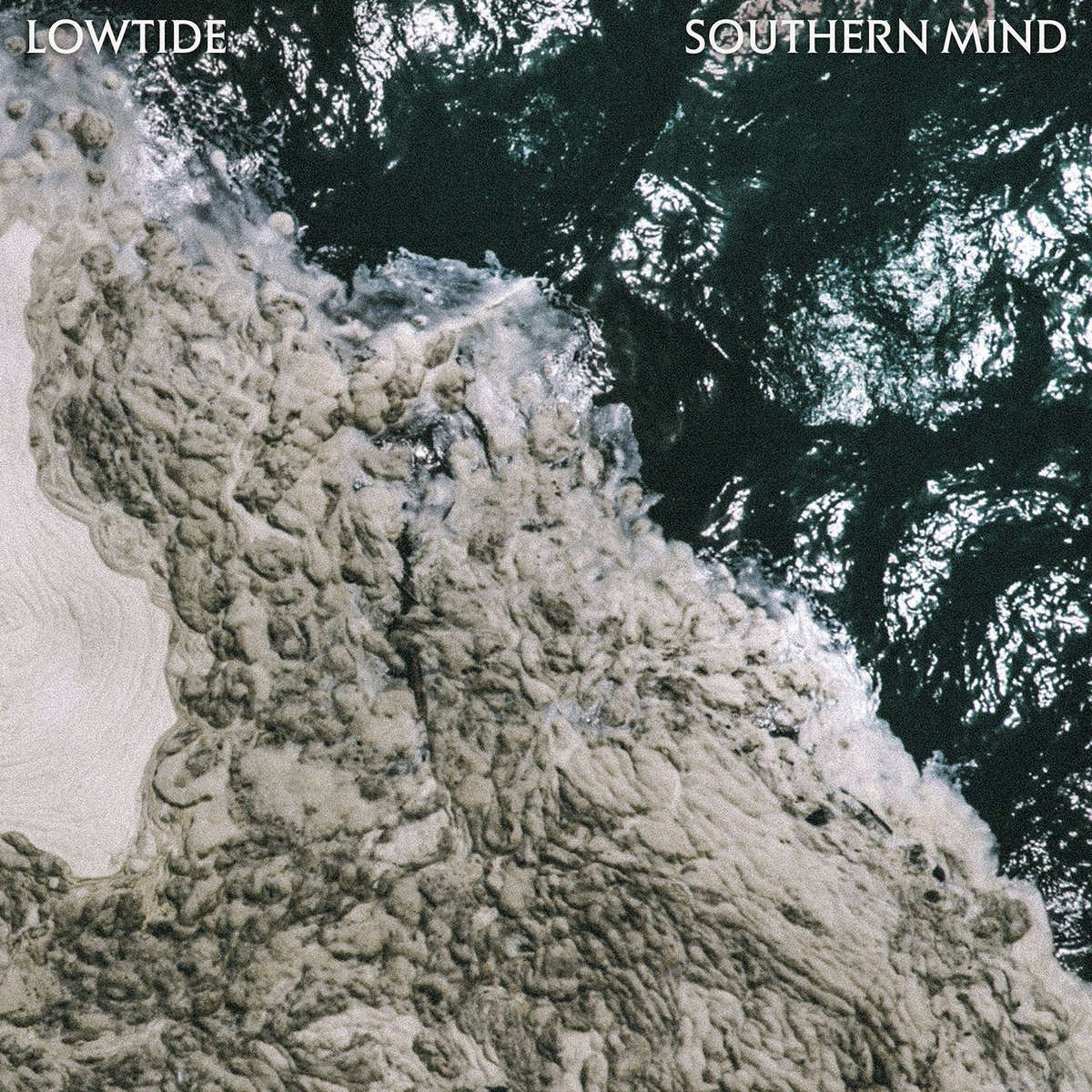 Last Friday saw Melbourne shoegaze outfit Lowtide finally send their second album Southern Mind out into the world. It comes almost six months after we heard its first cut, the rhythmic and pop inspired  ‘Alibi‘ and the announcement they’d joined forces with Rice Is Nice, one of the country’s most respected independent record labels. The news was clouded somewhat for fans however by the departure of co-bassist and vocalist Giles Fielke a month earlier, no small loss. Not knowing the details one can only speculate as to why and how but given the matter of fact way it was announced and the way the remaining trio simply got on with the job, you get the impression it was Fielke’s decision to move on and all parties had known for some time that the recording of Southern Mind would be his last contribution.

While centrally reliant and resting largely on guitarist Gabriel Lewis’s emotion charged melodies and precise use of a range of pedals and effects, a valuable accompaniment to Lowtide’s texture driven sound is how the two bass guitars are employed. Fielke’s Fender VI and Lucy Buckeridge’s traditional four string combine together to both complement and underpin the layers of guitar Lewis employs and offers him both a varied and shifting base from which to structure and launch his effects filled soundscapes and a boost in doing so. Of even more importance is the deeply affecting male/female vocal harmonies Buckeridge and Fielke have meticulously developed over the past seven years. Both voices individually and together reflect idiosyncrasies and imperfections that naturally denotes honesty and humility, ingredients essential to shoegaze culture and just being a sensitive and decent human being.

How Fielke’s absence affects the band in the long term is anyone’s guess. For now however, we at least have Southern Mind as an permanent evidentiary document of just how crucial a role he played in helping to realise the Lowtide aesthetic. And that aesthetic, worn by all, quintessentially speaks to and reflects Southern Mind’s very character and essence, in its introspection and uncertainties, in its many questions and in its multiple answers, none particularly concrete, all definitely abstract. There is strength in the quest but also in the realisation that not all questions have answers.

All of the above factors play out in memorable fashion across Southern Mind’s nine tracks and are accentuated by the attention afforded to time and space in the songwriting, both in thought and in form. The band made a conscious effort to adhere to the mantra of ‘less is more’ as a counterpoint to their 2014 self titled debut. This is immediately apparent in every musical element on the standout title track that opens proceedings. It can be seen in the spare vocals, the distance between the bass at the low end and the restrained guitar work at the other and in effortless timing and delicate application of drummer Anton Jakovljevic, who appropriately shines in form and effect throughout the record. The delightful ‘A.C‘. is another of the many opportunities offered up on the album for introspection through its softly chiming guitars, warm bulbous bass tones and Buckeridge and Fielke’s contextually on-song harmonies.

Time and space are also especially present on the second half of the record, especially on the enveloping slow burn of ‘The Fear‘. But the best example of it comes through on the patient ode to memory closer ‘Fault Lines‘, which serves as a poignant yet perfect end to the Buckeridge/Fielke vocal partnership. The employment of these elements act as sonic and lyrical metaphors, reflecting the band’s aim to conjure up visions of a sparsely populated Australian continent and its vast empty spaces  and what it means to live here. Lewis also mentioned recently that for him musical devices like time, space and the literary concept of ‘south’ and ‘southern’ stimulate recollections of how isolated Australia’s independent music communities were from each other in the late 1980s  and pre-internet age. This coincided with a time when his musical influences from the UK and Europe, well known and not, were beginning to peak. He also mused how their ability to easily connect gifted opportunities to independent communities in the Northern Hemisphere that could only be dreamed of here. But at the same time that isolation served a purpose in its realisation of innocence and wide eyed wonder.

While a sense of distance and classic shoegazing elements characterise the tracks above, the aforementioned ‘Alibi‘, second single ‘Elizabeth Tower‘ and our favourite track on the record ‘Windows‘ bring an undoubted pop sensibility to the table. On the heightened latter, it’s a version of pop that’s both substantive and muscular in intent and delivery, as a familiar chord is structured into an elongated riff that is served up widescreen fashion, dominated by its signature Fender VI bass sound. Layers of echoed guitar and coils of bass are piped through to provide tense backdrops for arguably the most determined vocal performance Buckeridge has ever delivered to ‘tape’. While pop elements are undoubtedly present and there is a somnambulist aura of sorts, the description of Lowtide’s as dreamy can be misleading and at times downright inaccurate. On close inspection rather being of a dreamy disposition, there is a drilled down discipline and creative focus that’s ever present and the default modus operandi. That serves to afford the listener the opportunity to take the long view and spend some time getting to the album’s core and discovering its many subtleties. Passivity just simply won’t allow you to travel the depth required.

The very nature of shoegaze and atmospheric guitar driven pop naturally leads its exponents to sometimes skirt close to the work of their antecedents and influences in both style and structure and Lowtide are undoubtedly genuine fans of the bands and artists who inspire them. That there are moments where this seems the case but its of no real consequence in terms of the album’s bigger picture. Because when Southern Mind is taken and listened to the way an album should, as a whole, notions of superficiality and facsimile are obscured by the cohesive meaningful textures and contextual depth. These serve to give it a cultural significance and a sense of originality within the seemingly familiar. It’s what will render Southern Mind a great contemporary addition to shoegaze’s overall historical record. And as a final nod to the contribution of Fielke, upon the album’s release, the band posted a beautiful black and white photo on their facebook page of all four at the end of the recording sessions and made special mention of his central role in Southern Mind’s realisation. Put together with the record itself, the image will forever serve as a reminder for what the quartet’s collaborative pinnacle looked and sounded like.

The band shared a visual to the title track upon the album’s release. Watch that below and if you haven’t already, check out the videos for the first two singles as well. Catch the band on their six date tour of  Australia in March and April. Dates here.

Get a copy of the album on vinyl here through Rice Is Nice Records (AUS/NZ) and through Opposite Number internationally here .