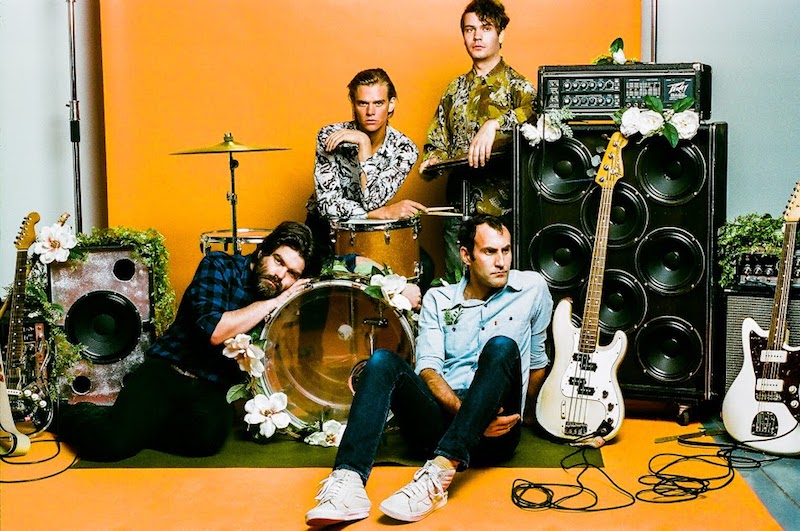 New Material is the stunning new album released today by remarkably consistent Calgary post punk experimentalists Preoccupations. Thus far the band have shared the urgency of synth based ‘Espionage’ as well as ‘Antidote’ , an inspired, genre bending work with a hypnotically industrial flavour and earlier this week added the exceptional album standout ‘Disarray’ to proceedings along with its appropriately shot video.

It’s slightly off centre feel is caused by the deliberate employment of slightly different timing structures between the bass and the drums and this is beautifully absorbed by a distractingly infectious reverb drenched guitar line. Its cascading chorus adds sufficient emotion and drama which is juxtaposed against the tense yet expansive vocal atmosphere created by ex-Women member Matt Flegel.

The Ruff Mercy directed video has Flegel walking through Saunton Sands in North Devon, England, the chaotic superimposed drawings on him are reflective of the track’s title. Indeed, the nine track titles give an idea as to the dark places the band traverses on New Material but at the same time an emotional core is clearly present. Glimmering shades of light are deftly applied to slightly soften but never undermine the pervasive sense of gloom and confusion.

Bands that not only utilise but trade on such oppositional musical motifs often find pulling it off difficult. The ease in which Preoccupations exude it on New Material across many guises as they did on their self titled debut as Viet Cong and last record under their new moniker is just one reason of many why they are such a damn fine band. And this could be their best record yet.

Listen and watch ‘Disarray’ below and pre-order the album on all formats here. Out through Flemish Eye in Canada, Jagjaguwar in the U.S and Europe and Inertia in Australia. The band begin their monster tour of North America and Europe next month in Toronto where they will joined on selected dates by Odonis Odonis, Freak Heat Waves and Moaning. Dates, cities and venues below the video.