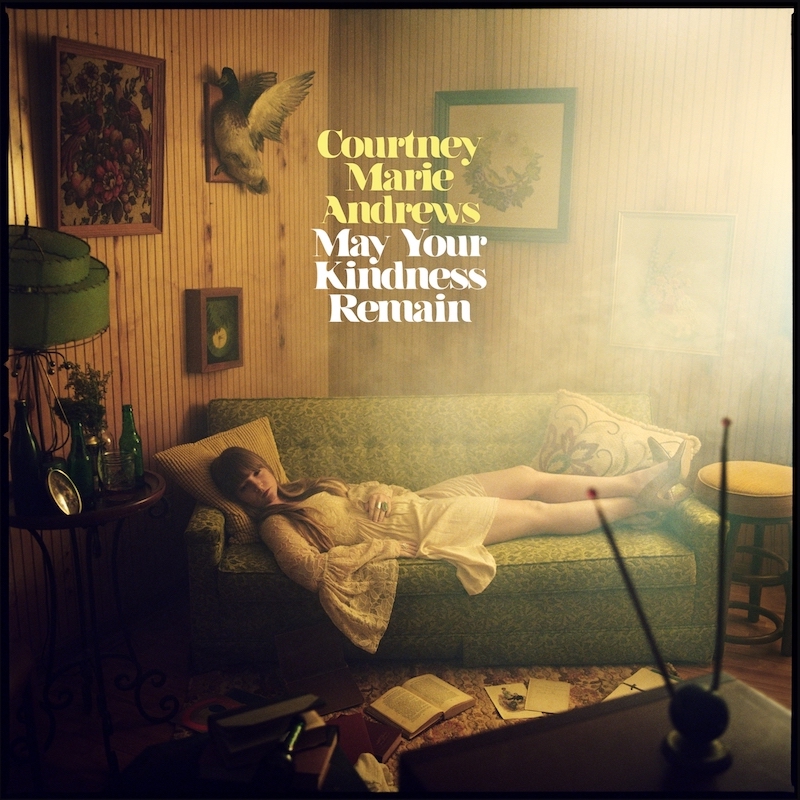 “It feels good not to bartend.” Courtney Marie Andrews.

The musical and lyrical content along with the title of the new Courtney Marie Andrews record May Your Kindness Remain is revealing on a number of levels. Not only does it perfectly showcase her undeniable vocal and musical virtuosity and her superlative songwriting abilities, it also embodies the essence of who Andrews is as a human being. Across the record’s innately perceptive ten tracks there’s an honesty and sincerity that’s ever present underpinned by a high degree of social and emotional intelligence. This is in part gleaned from her experiences growing up in Phoenix and her often lonely decade long struggle to finance her career as a female musician. The humility that stems from this has been on consistent lyrical display throughout the 27 year old’s decade long career and is ever present on this record. Without being condescending or judgemental, she’s left us a vividly observational set of narratives that attempt to navigate this harsh neo-liberal dominated world with values intact and your optimism alive in some form.  And all this is set to a quintessentially progressive blend of country and folk that weaves in other elements and genres with ease. Taken together they put her firmly in the camp of modern Americana.

That the record contains as many questions as it does answers is indicative of how Andrews sees herself and the world. As a result she demonstrates herself to be both self and socially aware. She is focused not only on her inner struggles but is acutely aware of how poverty and depression play themselves out in peoples lives in a competitive and ever-growing compartmentalised world. And that speaks to the most important of human qualities – the ability to have empathy for others. The album’s very title speaks to it as does its stunning opening salvo of the same name which foreshadows another theme she returns to often across the album – kindness. She steadfastly refuses to see vitally important (yet often incredibly disparaged) characteristics like caring and kindness as passe and she determinedly expresses them as literally and as directly as she feels. Both qualities are constantly undermined by a loaded economic system that heaps largely unneeded and undeserved rewards on those already prospering and excoriates, punishes and has little regard for the welfare of those who are not.

The theme of empathy is probably most front and centre on the blues and rock laden ‘Border’. It tackles the constant uncertainty facing Central and South American immigrants and the cynical and disdainful way they are used and abused by the American political right. Growing up in Arizona seeing first hand how hard they have it and how badly they are treated, she implores the listener to find empathy with the horrors they’ve experienced just to reach personal safety and think of the poor treatment and remuneration they’ve received for the back breaking work and contribution they’ve made to the United States.

Social injustice and living through adversity are central themes on May Your Kindness Remain as are the results which stem from them, disconnection, loneliness and depression. In the hands of those without the perceptive qualities of Andrews, such subject matter could easily become blinded by sentiment and self-indulgent, two eternal criticisms of country and to a lesser extent folk music, the two main genres she could be said to trade in. But the knowledge and understanding and the unflinching, direct and detailed lyrical style she brings to the table means that is never going to happen. There’s nothing one dimensional about the human experience and nor is there when Andrews tackles it. Crushing loneliness is met with dogged determination on the rippling expanse of “Lift The Lonely From My Heart”, and optimism and trust  on the AM rock stylings of “Kindness Of Strangers”. About writing the latter, Andrews has said;

“When you’re at your lowest of lows, even a friendly cashier can make your month.  Human connection is essential for survival, and I’ve felt that void at so many different points in my life.  This song portrays that void, and how even the smallest amount of kindness can save you.”

On the slow and delicate, ‘Took You Up’ and in the invigorating atmosphere at work on ‘Rough Around The Edges’, living and coping with poverty and distress is not treated with pity but layered nuance and quiet regard. Andrews never wallows in misery nor does she eulogise the struggle through it. This is because she not only places genuine emphasis on the everyday experiences of everyday people, but she also ensconces them inside a set of values guided by an empathetic sincerity that stems from being there, being a struggling musician working in bars to pay the bills but still possessing a big capacity to care for others. There’s also an insistent pride in and respect for the people of working class America. A pride and respect that equally understands the lies inherent in the false “American Dream” they have been culturally sold but doesn’t gloss over any shortcomings in decisions some have made looking for the quick fix either. These two quotes are illustrative of that;

“The people that I’ve met on the road these past few years got me thinking about my childhood, and the people around me that I’ve known, and the stories that come from my family. It became clear how many people are struggling through the same issues. People are constantly chasing that bigger life. A lot of people are poor in America—and because of those unattainable goals, they’re also mentally unstable, or sad, or depressed or unfulfilled. A lot of people—myself included at some point in my life—are loving somebody through this. That’s sort of the theme of the record: coming to terms with depression and the reality of the world we’re living in.”

Penultimate track, the swinging ballad ‘I’ve Hurt Worse’ shows a growing layered approach to her songwriting and could be interpreted in multiple ways from multiple perspectives. On it, she uses caustic humour and witty sarcasm to call out the actions of a supercilious and self absorbed lover seemingly as a way of empowering the woman who has been treated like shit. However, the track actually reveals itself to be borne out of Andrews’ frustration at the woman’s refusal to leave an abusive relationship. Lines that finish the sentence ‘I like you honey’ with “even when I’m feeling used” and ‘being with you is like being alone’ might by humourous in a dark and direct sort of way but irony aside, Andrews is actually pointing out how some women have been conditioned to be addicted to toxic and abusive men.

Musically she and her cast of studio players take things well beyond country with appropriate nods to blues, rock, pop, folk, gospel and soul effortlessly blending in and out as required rendering Andrews music quinessentially Americana in scope. Her unmatched golden hued vocals and their aforementioned subject matter are always where they should be front and centre but they don’t dominate in the way they would on a commercial release where respect for the song is hard to find. They are given extra emotional depth in texture and style by Daniel Walker and Charles Wicklander (piano/keys and wurlitzer) and by Dillon Warnek on electric guitar whose dissonant touches create an atmosphere which breathes extra emotive animation into what are already life sized compositions. There’s also a muscular feel to the record provided by Andrews long time rhythm section of William Mapp on drums and Alex Sabel on bass who provide the perfect accompaniment to the lyrical stoicism. The sublime recording and production abilities of Mark Howard (Lucinda Williams, Bob Dylan, Emmylou Harris and Tom Waits) who recorded the band live in a house in Los Angeles over eight days, give a striking immediacy to Andrews’ compositions and their embellishments.

Andrews attitude towards life and art embodies the very essence of what independent music and culture is about. Her virtuosity makes her as good as any artist out there whoever they are. But she’s just happy that the takings from her last record, ‘Honest Life’ enabled her to stop bartending to have to make ends meet. It also allowed her to write and perform according to the beat of her drum and hers alone. And this album demonstrates what true artistic freedom and being in full control can produce without the worries of having to make forced “hits” or conform to an image. An album self- explorative and openly honest, sometimes metaphorical, often straight out literal and one that possesses a deep social conscience without the sanctimony. It’s rich with emotional intelligence and conveys a humility and empathy for others rarely matched on wax. She also clearly has a deep knowledge of and deep respect for the history of the genres of music in which she trades. With May Your Kindness Remain, Courtney Marie Andrews has made a record for the ages; emotionally enthralling and deeply affective vocally, lyrically in tune with the human experience in all its strengths and weaknesses and one that value-adds in spades to those aforementioned musical genres. And she’s done it all on her own terms. Forever may that continue.

May Your Kindness Remain is out through Mama Bird Recording Co. and Fat Possum (US/CAN), Loose Records (UK/EUR) and Inertia Music (AUS/NZ). Stream it below and get your copy here.

May Your Kindness Remain (Album Stream)

From the album, ‘May Your Kindness Remain’, Fat Possum/Loose/Inertia.