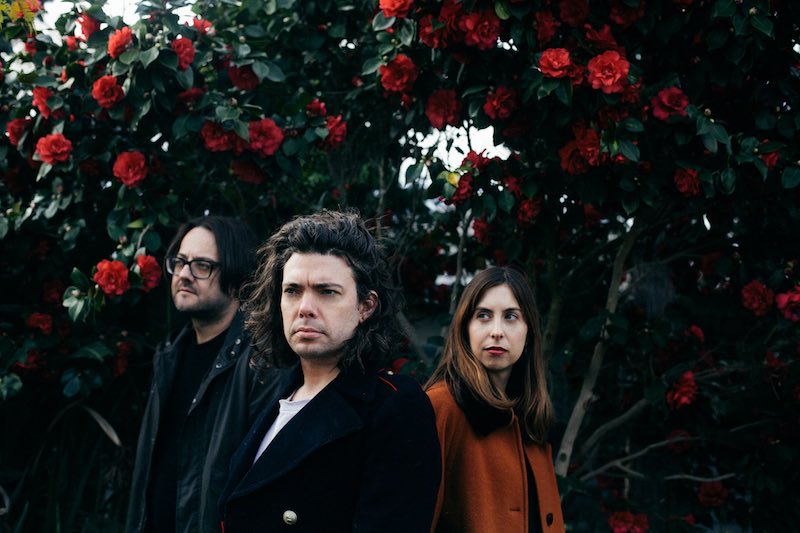 Melbourne shoegaze/dream pop outfit Lowtide hit Adelaide tomorrow night to complete their initial 6 date national tour in support of their excellent second album released earlier this year, Southern Mind. To mark the occasion, Indie30 took the opportunity to send some questions over to the band regarding how the album came about, the songwriting and recording process and the creative thinking behind its themes and production. We also inquired as to what the future holds for the band without Giles Fielke, their former co-vocalist and co-bass guitarist and what its like to play in an independent band in what is hardly a financially rewarding environment. Guitarist Gabe Lewis was kind enough to respond to the first five while drummer Anton Jakovljevic was equally kind enough to take the rest.

Indie30: Your discography has a rather Olympian look to it; 2010 with the EP, your self titled debut in 2014 and now Southern Mind in 2018 with just the cover ‘Julia’ in between. I’ve read that the debut album took two years in total to record. What was the initial aim and eventual timeframe around Southern Mind? Given the potential for second album syndrome and trying to meet the expectations you set for yourselves, did the writing and recording process go as smoothly and as well as the finished product suggests?

Gabe: That’s an interesting observation! I hadn’t noticed that. So, perhaps the interspersed 7” releases are like the Commonwealth Games.

I think the only main concern with the second album was to make sure that it didn’t take as long to make as the first. Which it pretty much didn’t. We were fortunate enough to have a grant which meant we didn’t have to stagger recording and mixing sessions while saving for the next. I think we had most of the songs written much faster and earlier than the first time around. To me it seemed like much more of a fluid experience.

Indie30: Southern Mind has a definitively different feel to your self titled debut. Those atmospheric pop elements are still present but the sound is far more shoegaze like and widescreen and has a strong thematic cohesiveness.  Volume and tone used for effect plays a more central role, there’s more fuzz and swell and the vocals have been set down much further in the mix, serving the aesthetic rather than being up front. Can you explain the thinking around this and how the change to take this approach came about?

Gabe: This was a production decision right from the start. We wanted something less polished and pop, something much denser, more emotive, and truer to our live sound. It also kind of connects more with the sounds of songs as they are in their infancy, before they become second nature. This process really began when we first worked with Matt Hosking on the Julia/Spring 7”. He just had a very different vision for our sound, and we were amazed at how well it fit.

Indie30: Metaphorically and geographically, the theme of “south” as it relates to loss, isolation and escape comes through strongly on the album. What was the thinking behind this? And given the aforementioned expanse in sound and the lyrical possibilities that conjured up, were the lyrics written to fit that change or did both music and lyrics come together as more of a planned approach from the start?

Gabe: I felt that from the beginning of the writing of the songs there was a darker, heavier tone to what we were creating. In my mind, themes were derived more from unfocussed landscapes of mood than physical references. Generally the chord structures and bass lines would come together and then lyrics and guitar melodies would be layered through that. Kind of like a stream etching a gully, I suppose.

Indie30: Many elements effects wise were employed in recording Southern Mind? Given its multiple layers and dense atmosphere, what central drivers were behind creating this sound and for the uninitiated is putting all this together and getting it right as painstaking as it seems to be?

Gabe: As far as the guitars go, lots of layers. A fair bit of double and triple tracking through slightly different variations of effects for different densities and timbral options. Also some hexaphonic tracking of chords to be able to spread them across the stereo field. As for the rest, I think that’d be something only Matt could answer. But from what I saw him do it was a very delicate balancing act, ensuring nothing was too muddied or obscured. Everything still needed a space of it’s own, and room to move. To make even small edits, many things had to be tweaked and readjusted to make way for the alteration. I’m sure he’ll be embracing the Olympic 4 year holiday away from us!

Indie30: At the conclusion of recording Southern Mind, Giles made his departure. I love the beautiful photo taken in the studio at the end of the process and shared on social media. That and the casual way it announced seems to suggest the decision was taken well before then and everybody had come to terms with it. As many fans were quite taken aback, can you possibly shed some light on it?

Gabe: Yeah, that was a nice moment. We’d just finished our final recording session in the studio and felt that the photo captured a moment of celebration, that we’d finished the recording phase of something we were confident was going to be a great album. The line-up changes came into play a little while after it was taken. We decided to post it when the album was released to make sure Giles’ incredible input on the album wasn’t diminished or confused by the introduction of Jeremy as a live presence.

Internally it’s taken some time for adjustment. Externally, some people have found it strange, others have embraced it.

Indie30: You’re obviously focused on working Southern Mind and are probably are still a long way from working it out but given Giles’s lyrics, vocals, harmonies with Lucy and his bass/guitar work were so fundamental to the band’s sound, how do you go about replacing him long term? Jeremy Cole from The Zebras is playing his role on tour and you’ve said his knowledge of the Lowtide aesthetic made the temporary transition seamless. Do you see the role Giles developed continuing or does this give the band the opportunity to look at alternative options?

Anton: I’ll be honest, we really haven’t had the the opportunity to think that far ahead. Once we’ve finished touring this album, we’ll have a sit down and work out how we’ll move ahead. Giles played a very important role in Lowtide becoming what it is so things will be different but I can’t see us straying too far away from what’s in the band’s DNA.

Indie30: For the vast majority of independent artists, making music and touring in most cases is hardly financially rewarding. Often “day jobs” are mandatory and playing in more than one band essential while some actually prefer to mix things up with study or other interests. How has that been for Lowtide over the journey for better or worse. Besides band commitments and playing music what are your other passions/callings in life? How has all this contributed to the music you make, how you’ve made it and as artists generally.

Anton: Yes we have always and still do have day jobs. This partially explains the long gaps between releases. I’m personally a bar manager here in Melbourne but safe to say that would have zero impact on our music. It does mean I’m very good at rationing out the rider though!

Indie30: How has the reception been around this record compared with the last in your minds? The well deserved press response both here and in the UK and Europe seems to have been overwhelmingly positive. How has it been in the US or Canada in terms of getting the album out there.

Anton: Having had the first album re-released overseas in 2016, it obviously meant that we already had a base to start with for the new album unlike with the first. It’s nice having some anticipation for the release and we couldn’t really have asked for a better reaction in the UK and Europe. Stateside we’ve had plenty of support from radio stations like KCRW (Henry Rollins debuted the album in full on his show), KEXP and DKFM and Rice Is Nice has distribution over there so nice knowing it’s floating around in stores.

Indie30: You’ve played in many pub type venues over the journey and play the Grace Emily Hotel this Saturday here in Adelaide. Obviously you’ve cut your teeth in them, but how does your sound, with its mixture of the expansive and the intimate, usually gel with smaller venues?

Anton: We started in small pubs and that had a part to play in developing the sound. Most of the dynamics come from Gabe’s guitar and he controls that from stage so we’re happy regardless the size of the venue. We’ve heard nothing but good things about The Grace Emily so we’re really looking forward to playing this Saturday and also getting the chance to see Draining and Dean Forever.

Lowtide play The Grace Emily Hotel tomorrow night with support from dream pop duo Dean Forever (more on them soon) and Draining with the former kicking off at 9. Details here and tickets here.

The highly recommended Southern Mind is out now on vinyl through Rice is Nice (AUS/NZ/ROW) here & Opposite Number (UK/EUR) here. The album is streaming via Spotify below and you can read our review here.

From the album, ‘Southern Mind’, Rice Is Nice / Opposite Number.