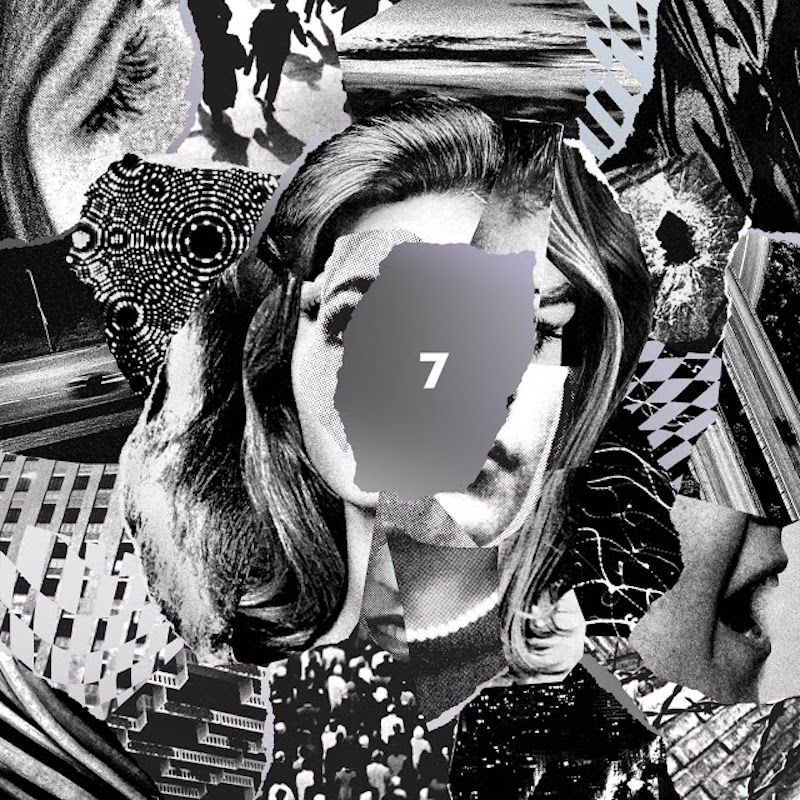 In a more general sense, we are interested by the human mind’s (and nature’s) tendency to create forces equal and opposite to those present. Thematically, this record often deals with the beauty that arises in dealing with darkness; the empathy and love that grows from collective trauma; the place one reaches when they accept rather than deny.” Beach House.

Ever intrinsically and musically self-aware, 7 is a definite rejuvenation artistically for Victoria Legrand and Alex Scally. A sense of freedom and an expansion in the scope of their songwriting is instantly noticeable. The album is more nuanced yet so immediate, the diversity of musical ideas explored and approaches taken benefiting from a ready embrace of risk and experimentation. There’s also more depth in and a definite width to the overall production where the sound feels more organically generated, like it’s been allowed to bleed through the exterior walls of each track and take its natural shape. These shapes form an album of palpable contrasts musically complementary in character. Its blend of light and dark sonic hues also a representation of the equalisation of these forces. A zero sum game this ain’t.

The out of the box nature of ‘7’ came directly from the Baltimore duo’s crucial decision to eschew the creative conventions they’d been tied to. Four decisions were crucial. They firstly streamlined all aspects of the creative process and brought them all together in one space expanding their writing and rehearsal space in Baltimore into a recording studio. Legrand and Scally also decided to bring live drums into the recording fray for the first time and enlisted their touring drummer of the past two years James Barone to play on the entire record. The result of that in terms of dynamics heightens 7’s lived in feel but also serves to keep a disciplined lid on proceedings.

The timeframe of the recording process was also markedly different from the way they’d done it previously. As tracks were written, they were able to immediately record each of them in their Baltimore studio and then head straight into a professional setting (Carnegie Hall and Palmetto Studios) to finish them. Rather than one long session across a number of weeks, it ended up taking place as required in batches in five short sessions across eleven months, thus retaining the creative excitement. And finally, the decision to produce it themselves in the relative solitude of familiar surroundings but for Barone and the trusted presence of Peter Kember from Spacemen 3 as co-producer was arguably the most crucial. The process took on a more relaxed air with Kember’s generally knowledgeable but specifically unadulterated ear ensuring they didn’t over think everything and kept their focus on the essence and aim of the songs. On hearing the finished recording the success of trio’s co-production is palpable.

That instant within the first few seconds on opener ‘Dark Spring’. The weight and substance is omnipresent; there is no let up as the track’s power reverberates around its ornamental musical structures scuffing them up beyond repair. The variety in Legrand’s vocals stand out markedly on the substantive pop ballad ‘Pay No Mind’, somnambulist and dreamy initially but presenting as more than lucid on occasion. On ‘Lemon Glow’ the slightly lagging pace of the beat set behind constant percussion combines with a woozy non-stop loop to set a deliberative two paced effect as submerged synth glides along accompanied by a pulsing submarine echo. During its outro, all elements are completely obliterated by a destructive cacophony of sound that its three tortured guitar chords always threatened to usher in. Latest single ‘Black Car’ with its circular layers of synth evokes the tension between contrasting forces oscillating back and forth vying for an ascendancy neither are ever going to reach in permanence. Along with the dark organ shimmer and Legrand and Scally’s hi-lo harmonies on the chord focused ‘Dive’ and the astral yet earthy ‘Lose Your Smile’, the elements contained within are all sonic metaphors for balancing the antithetical with equilibrium. They also should serve as immediate examples of how different this record is in sound and arrangement to its predecessors.

Legrand’s mantra like vocals takes centre stage on the hypnotic ‘L’Inconnue’ (The Unknown) like she’s echoing instructive advice across the ages as it pans across the speakers. Sung half in French, it continues the light and dark contrasts and alludes to the apparent suicide of an unknown girl whose body was found in the Seine around 1900. It contains references that relate to the binary nature of natural feminine desire versus the constructed shame, repression and control of it. Femininity has always been polarised historically as either evil or weak with the reality in between prevented from surfacing. The fact that it remains the subject of derision and is attacked and pilloried so readily by a dominant culture with an outdated ‘might is right’ attitude is the world’s greatest injustice. However, despite it being sidelined and outwardly overshadowed though, the stamp of femininity is everywhere and the world would be an even uglier place without its equalising influence on the toxic aspects of masculinity. This equalising force is generally in keeping thematically with the record

The other theme of the record deals with the momentarily fabulous but ultimately false and fleeting nature of fame and glamour and the shallow ultimately empty system that drives it. ‘Drunk In L.A.’ is a hazy meditative reflection on the accidental and lonely nature of individual popularity within the context of a economically driven cultural machine that is manufactured and cares nothing about anything of any substance. It rudely enters the independently minded and progressive world quite often but luckily will never have enough substance to stay for long. In fact its garish, repulsive nature strengthens that world rather than threatening it. ‘Dive’ has a duality to it that is fitting of its track placing as its gentle and sure beginnings soon give way to a pummelling finish. The last three tracks can almost be seen as a medley musically and lyrically. ‘Woo’ and is a cosmically gorgeous ride but lyrically that ride is revealed to be a musical mirage as Legrand reveals in metaphors why the band are so guarded and insistent on staying clear of major labels and crass commercialism and ‘Girl Of The Year’ continues that trajectory, its ending as abrupt as the end of most brushes with fame. The slow dance of ‘Last Ride’ can be seen as tracing those moments alone in the aftermath as pieces are picked up and life’s eliptical nature kicks back in.

Those who were never along for the ride with Beach House will not appreciate both the vast and subtle differences that mark ‘7’ from its predecessors. They are the same people who have never appreciate the duo’s pioneering style and sound, one that came like a bolt out of the blue back in 2006 and even now is largely uncategorisable. This may be because Legrand and Scally’s music is inward and deeply personal and has never been designed to please anybody. And while there has always been the freedom to make the music and records that wanted to make on ‘7’ that freedom was complete and total and the reinvigoration shows. With age comes wisdom and ‘7’ is a wise album. While not quite hitting the mark of Teen Dream it veers close and can undoubtedly can be counted among the best work Beach House has ever done. And there are not many artists who can say that after 7 albums, 77 recorded songs and 13 years.

‘7’ is out now through Sub Pop (US/CAN/ROW), Bella Union (EUR/UK) & Mistletone (AUS.NZ). Click on the relevant label to pre-order in your region and listen to the album streaming below with visualiser.