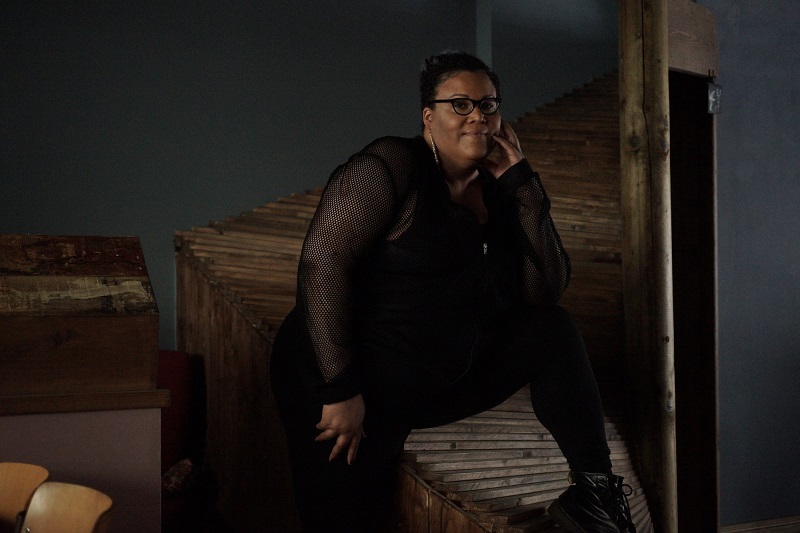 Three weeks after announcing her move in the world of hardcore techno with the release of her debut EP, Post Traumatic Rave Syndrome as Femanyst, Berlin based American DJ/Producer Akua Marcelle Grant has unveiled her parting release for now under her Beatdown and House alter ego Lady Blacktronika. The subtle yet dynamic 5 track EP Old Book, New Chapters contains five unreleased tracks recorded between 2010 and 2016, hence the reference to old books in the title. From the absence of releases this year, it’s clear that the new direction Grant has embarked upon recently has been wholly her artistic focus.

The change to Femanyst comes in the wake of almost a decade as Lady Blacktronika during which she moved to Berlin from Northern Califorina. The last three years in particular have been rich ones release wise where she put out no less than 12 stand alone EP’s, a number of collaborative releases, contributions to compilations and a full length album to add to her previous two. On Old Book, New Chapters Grant partly documents her nuanced adoption of the lines and elements found in the cerebral techno styles of her adopted home, especially its experimental and minimal schools, and marries them with Detroit Beatdown, the minimalist, groove, soul and funk infused style of techno, house and deep house that all forms of dance music owe much of their existence to.

All five tracks centre on showcasing Grant’s variety of approaches in composition and production. She establishes and then shifts subtle combinations of tone, mood and rhythm through adeptly applied vocals and samples, glassy synths, hypnotic classic/deep house motifs and groove soaked bass lines. The disciplined edges, lines and angles that land tracks like ‘Candied Yams’ and ‘VHS (U Belong) fairly and squarely in Techno’s minimalist camp speak volumes for how seamlessly stitches together her take on the Detroit-Berlin relationship. The canny use of kick tone, a wide range of hat sounds and carefully inserted percussion effects create slight changes in rhythmic emphasis that reverberate, in terms of the dynamics they produce, far beyond what you’d expect. You can hardly pick which track was released when. It renders what is already a diversely rich set of tracks an idiosyncratic, minimalist and futuristic delight, three factors that have always sat well when used to describe Grant’s music.

When she decides to return to Lady Blacktronika in the future, this EP reminds us from her decade as The First Lady of Beatdown, there is still much scope for her to shape and develop what has become a stunning blend of Detroit and Berlin that is uniquely her. Old Book, New Chapters is out on Sound Black Recordings. Stream it below and get a digital copy here.

Establishing the Femanyst moniker for Grant represents not only an important musical change but is also an affirming personal and political one. Personally and politically, the harder edge allows her to channel then exude the power needed to exorcise the pain from her past relationships and harness the frustration stemming from ever-present racism, patronising and sexist ignorance and narrow binary views around gender. In terms of the music, she is striving to open up new horizons in techno’s hardcore and gabber spaces and bring some wicked manic grooves to the table. This is more than confirmed on her debut, the impressive 4 track Post Traumatic Rave Syndrome which recalls in spades the ‘aggressive energy of 90s rave culture’. Watch the DIY video edit for the cerebral and explosive ‘Burnout Trash’ and stream the EP from soundcloud. Its out now on Paula Temple’s Noise Manifesto. Purchase it digitally here .

*Her recent performance as Femanyst in Paris at Nuits Sonores is also below.

NOTE: This article has been amended to reflect that the EP will not be her last as Lady Blacktronika and that the tracks are not new.