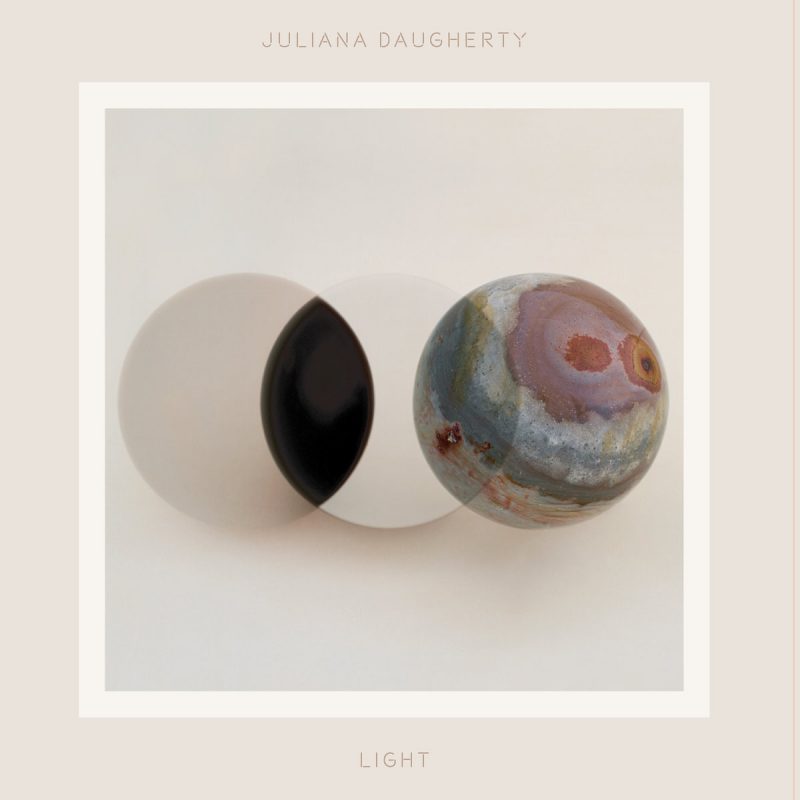 Charlottesville artist Juliana Daugherty’s new album Light begins with the amazing opener ‘Player’, the deft merger of gently strummed rock chords, electronic effects and pitter-patter like drum programming. While the rest of the record’s diverse offering can be seen as a bit of departure, ‘Player’ gives an insight into the formula Daugherty and producer an fellow multi-instrumentalist Colin Killalea have in mind for the record. The painstaking attention to detail and unexpected twists and turns makes the high order of its songwriting readily apparent and this is given further clarity by Curtis Fye’s touching mix. But what really brings the acoustic and electronic elements out of the shadows and makes them as crucial as they are is not only what they serve but also what they create for Daugherty’s commanding, at times circumspect voice and the frank intensity of the lyrics it dutifully delivers.

There’s mutual benefit here as vocal overshadows but at the same time exposes the delicately delivered musical intentions. This renders Daugherty’s words strangely authoritative even when her voice is quivering under the lyrical weight of uncertainty. The slow folk and country tinged ballad ‘Baby Teeth’ offers the perfect counterpoint in musical terms and both tracks serve as forebears for the range of styles that follow, immediately bringing forth the lyrical weight that taken together with the rest of the record, is some of the best prose in songwriting going around. In Daugherty one finds an artist that traverses art forms, a songwriter, multi-instrumentalist, vocalist as well as literary poet. A poet with a Masters degree in the discipline no less.

The other noticeable aspect that’s extremely effective on Light is Daugherty’s deliberate use of elongated guitar notation and skewed vocal timings. Both enable her to turn over and transform folk rhythms on a dime. These subtleties and Daughterty’s sublime knowledge of how to extract that special intangible feeling at key moments are readily apparent throughout. The folk focused ‘Devotion’ is arguably the best example of this as Daugherty addresses her significant other directly with a haste that matches the lyrical lament of how fleeting our lives ultimately are. ‘Sweetheart’ hangs in the air with a constant elevated air of expectation which is neither rejected or fulfilled. But the emotional release in the sense of what may arrive is conveyed better than any definitive answer could provide. The chorus of ‘Bliss’ is simply stunning and an example of how appropriately well Daugherty represents and vocalises the particular emotion she wishes to draw on. At the same time its illustrative of how her vocals adhere to the needs of the song. For none of them are there to provide a structural vehicle for her voice alone .

‘Easier’, particularly poignant in its honesty, deals with the aftermath of yet another failure to overcome depression. There are no easy answers, if there are any answers at all as Daugherty knows from experience. The sense of resignation and relief that comes with failure because the trying is over is tempered by the knowledge that the little bit of a break your about to catch from the sapping nature of the attempt is temporary and a trial you know you’ll have to return to. The never ending cycle of trying and failing is almost heard in the running folk melody where tiny differences representing each attempt are heard in a subtle timing alteration, a slight chord change. Daugherty is also able to represent lyrical frustration without losing musical stride by completely altering her vocal timings, often mid line. Both temporary relief and permanent frustration are finally reflected in the extended high harmonies at the end of the long chorus especially the way the word ‘easily’ is intensely delivered in two parts at song’s end. These harmonies denote the dizzying pain experienced from not being able to kick the negativity.

‘Light’ runs on an constant off beat with gives the track an almost tropical feel which counters the weight of ‘Easily’ but don’t be fooled by appearances. While it’s darkness is hidden by the musical sheen, it’s kind of representative of the rest of the record in the sense that through the pain there is growing awareness conveyed through the explorative way that Daugherty comes at expressing sadness – in relationships and with the self, that being ok is not necessarily the default position we are taught it is. Daugherty senses she may never get better which makes those resigned words all the more poignant. The need to try to overcome what may be permanent will return again and again and its daunting to know that.

The last three tracks don’t pretend to sugar coat ‘Easily’ and ‘Light’s’ subject matter or again provide any definitive answers but there is definitely a sense that Daugherty knows the direction that’s she seeking may never be traveled or the absence of the battle may never come and that perhaps is where some sense of solace and ability to live with being down maybe will come from. Like living with any mental condition or illness, depression is a facet of life for many. And the answer may lie in dealing within the realms of possibility. Managing the expectations we have of ourselves vis-a-vis what we’ve derived from our environment becomes all the more important; as hard as that may be faced with a society that seems to be regressing and reverting back to a nauseating binary and simplistic state. As for the pitfalls of love, the album’s other great theme, the question as to whether we can temper its hold but maintain its power is an eternal one. Can we lower our expectations of others in terms of our need for them to be something they cannot be?

It would be easy but wrong in and of itself to say Daugherty’s vocals stand head and shoulders atop every other element on the album. They do and of course should stand out, the way the words instantly connect in such expressive but tempered form gives them an immediate authencity. Yes, musically it can be labelled delicate, slight and minimal but without caveats and context that would be really lazy. Without its deeply moving musical arrangements and Daugherty’s idiosyncratic guitar style, both strong and alternatively subtle when appropriate, this album would have been nowhere near as effective at conveying its lyrical brilliance and the vocal ability its protagonist deserves. Take it from a person who never hears the words of a song until he drills down on to them. Lyrics have never come easy for me as a listener and even with the strength of these here, I needed the music to provide me an opening to them. Without a musical window into Daugherty’s pertinent, honest and frank assessment of her struggles, they may have passed me by. Thankfully though, this album is one where the sum of all its parts are as crucial to each other as they are to its overall character, not something always apparent in the vocal driven musical lanes that Daugherty travels. Without such aural illumination accompanying the undoubted lyrical brilliance, the experientially rich struggles she openly lays bare may well still have been understood. It’s just doubtful those struggles would possess the level of universal salience they have now.

Light is out now on Western Vinyl. Stream the record below and buy a copy here.