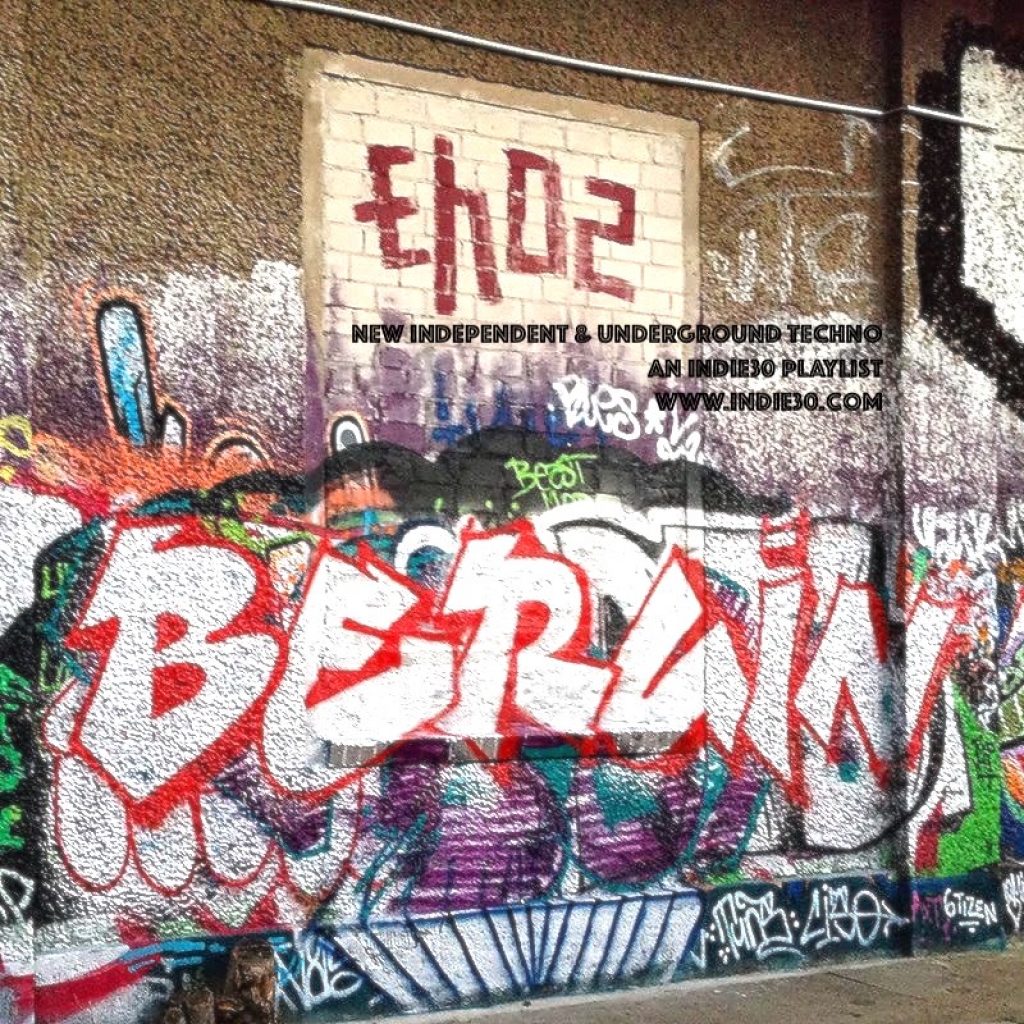 PLAYLIST UPDATE AUGUST 3: This playlist update begins with a Polish one-two. First up is Klaudia Gawlas with the sparse yet immense ‘Manifest’, the title track from her new EP which is out this week on Blackrod. Also out this week is the Unbroken EP (Natch Records/Elements) from Warsaw producer Pawel Zawadzki aka Concept of Thrill. We’ve featured ‘Struktura’ in the list over the past few weeks and as that leaves the ominous locomotive like closer ‘Zaret’ which is equally impressive replaces it.. The inside and understated work of the title track with its thunderous rhythms leads the 10 new entries.

Hamburg artist/producer Helena Hauff‘s long awaited new album Qualm (Ninja Tune) was released today. The distorted effects laden ‘Lifestyle Guru’ gets our nod as one of the best tracks on what is a strong and fiercely made independent release . Following that is Cardiff DJ/Producer Robert James Pike aka Heartless, with ‘Internal Voice’, a disorienting work of thrillingly unremitting discombobulation . It’s opens the B side on his new EP Inner Crosstalk (6dimensions).  The ever important question of gender equality and the robotic age we are fast moving towards are the salient subjects again tackled by the brilliantly inventive Serena Butler on her/his new EP We Want Neither Clean Hands Nor Beautiful Souls (Stroboscopic Artefacts). Click on the title for our review of it.

Next is the strange allure of the restless ‘Spectre’. The title track from Aether‘s debut EP on Afterlife is imbued with equal parts melodic and experimental intent possessing dissociative qualities that never allow the track to quite catch or adhere to its groove. That’s followed by legendary Japanese DJ/producer Ken Ishii who has again teamed with Stick Recordings aficionado Alberto Ruiz to produce the thumping ‘Parallel’.

Dax J has been releasing some mighty fine techno lately releasing his second full length album this year, No Redemption (Monnom Black). The mysterious ‘Russian Blood Lines’ is another fine example. We haven’t been able to feature much from Drumcode lately so its a good thing that Webbha is carrying the torch with the one part melodic, one part rabid urgency of the title track off his new EP Catarse. Speaking of rabid urgency, the huge sound of Ricardo Rodriguez aka Industrialyzer (Suara), is next with ultra intense ‘Balance Motions’ off an ep of the same name before Italian artist Hollen brings a bit of decorum to proceedings and completes the update with the the beautifully paced title track to his new EP Script (OFF Recordings)

NOTE: This playlist is part of a loose genre based series of seven revolving 30 track playlists on the Spotify streaming platform. Tracks are roughly ordered by release date and will be replaced by new tracks as they become available. All playlists are regularly updated and all lists limited to original tracks only – no covers and no remixes.

Go to the Spotify icon under Follow Us to access all seven of our playlists including each week’s Top 30 chart covering all genres. If you like what you hear don’t forget to activate the follow button and add us to your playlists so you can keep regularly updated with new independent music. Go here to listen on the Spotify web player.

Past updates are below the player.

The blistering ‘Argo’, the industrial inspired title track from the new EP by Parisian duo WLDERZ on Skryptōm is the first of 10 diverse new additions to update our Techno playlist. To illustrate the diversity on offer, following that is the entrancing minimalism of ‘Keep Under Wraps’ from Bristol based multi-genre electronic experimentalist Kayla Painter. That’s out through Drawstring Records. Both those tracks were released on Friday. Yerevan DJ/Producer Razmik Makhsudyan aka Tøtal, released his excellent new EP NGC 2207 earlier in the week on his own Death Bell label and the restless NGC 4676 is the pick of three here while the solid ‘Time’ follows from Metodi Hristov‘s and Gallya‘s new EP White Lines on Octopus.

BleeD Records, the label of London producer Volte Face has released its first compilation called Social Sculpture and as you’d expect there’s some excellent experimental fare to be had. Three tracks out of the eight are in the list; Chiba City and Paris experimentalists DJ Nobu & BLNDR‘s ‘Fish’ and ‘Doepfer Exercise’ respectively are mesmerising fare in very different ways as is the pounding ‘Shit Business’ from Rote, the project of Daniel Avery and Volte Face himself.

Next is the foreboding circular monster ‘Greywacke’ from London hard techno DJ/producer Romek Boyer, aka Rommek is from Sedimentary, the second release in his Set In Stone Trilogy out on Blueprint. Italian dark techno duo Andrea Vallisneri and Andrea Casari aka VII Circle have a new split EP out with Barcelona based Memorial Home, the project of France’s Paul Roux & Belgian Jeremy Pinchasi for their label Rapid Eye Movement. Both tracks in from it ”Dogma’ and ‘Second Floor’ expertly unsettle in different ways.

Five new tracks in our update this week. The opener is the immersive and powerful ‘Brunette Cistern’ from Toronto experimental producer E-Saggila (Rita Mikhael) who last Friday released her excellent six track album Dedicated To Sublimity on New York City’s Bank Records.  Next is the spatially powerful title track ‘Enigma’ from Birmingham DJ/Producer Rebekah whose three track EP on Soma quickly follows up her excellent album from March, My Heart Bleeds Black. The razor sharp ‘Flare’ by London producer Sigha (James Shaw) follows from his new four track untitled EP on Token before the ultra buoyant ‘Struktura’ from Warsaw producer Concept of Thrill (Paweł Zawadzki) from his new EP Unbroken on Natch Records/Elements ends the initial attack. Fellow English producer Max Cooper then takes things down a notch or two with the detailed atmospherics of Identity off his forthcoming album One Hundred Billion Sparks due in September on his own Mesh label. We’ve subsituted the La Fraicher and Echologist tracks too. With the former, the busy closer from Self Fulfilling Prophecy ‘La Plant’ replaces ‘Eaux Troubles’ while from the latter’s In Transit EP the buried ‘Raise’ replaces ‘Dispatch’. On InFiné and Mord respectively.

FURTHER UPDATE: REBEKAH DROPS NEW TRACK FOR PERC TRAX  Not content with dropping an EP a week and a half back (the title track is in our latest playlist update, Rebekah,  has unveiled another hardarse new track ‘Diamond In The Rough’  which appear on the new 4 track compilation for Perc Trax, Forever 1 with Head Front Panel (John Heckle), Manni Dee and Scalameriya. Check it just below. Buy the vinyl here.

Diamond In The Rough

South African born and New York based producer Brendan Moeller buries the recurring synth motif deep inside an enveloping multi speed sound vortex on the excellent ‘Dispatch’, the centrepiece of ‘his new EP on Mord, In Transit under his Echologist moniker.

Selección Natural is the amazing collaboration between PoleGroup mainstays Oscar Mulero, Valentín Corujo and Héctor Sandoval (Exium) and Juan Rico (Reeko).  ‘Negative Selection’ comes from the digital only 2 track bonus EP that accompanies the self titled album and recent Indie30 Album of the Week they released in May to mark the Spanish label’s 50th release. Check out solo tracks from Mulero, Rico (Reeko) and Sandoval (Tensal) further on in this playlist.

Washington DC producers Jackson Ryland, Jus Nowhere make up Rush Plus, the project they began in 2016. Their new EP homes in on what they term as the Third Sound, found in the spaces between audible sounds and aided by velocity and speed, two aspects found in abundance on the busy and pacy ‘Rebirth’.

The Dutch producer’s eclectic new album Voids is an impressive affair and the muscular punch and crunch of the glassy’World Gate’ is one of its standouts.

English producer Felix Manuel is set to release his new album Portraits of Firewood. ‘Sex’ is an amazingly multi-dimensional track that is cloaked in dubstep beats and a techno vibe. Excepts of emotive piano and violin step in to traditionally offset the amazing futuristic sound generation that emanates from expertly arranged percussion and field recordings.

Italian techno soundscapists Sergio Pace and Vincenzo Ferramosca expertly construct a pensive journey steeped in contemporary and traditional approaches on the analog driven ‘Straight To Light’ from their new EP Drops of Heaven.

The lithe, minimal and disciplined ‘Silence’ is the standout from The Healer, the new four track EP on NovaMute from Ghent DJ/Producer Charlotte de Witte.

Mallorca DJ/Producer Dani Sbert’s ultra prolific 2018 continues this week as he leads of our playlist with the authoritative ‘Titanium’, the title track off what we think is his 36th EP or single release to go with his album from late May Beggining of Somethng The Album (sic).

We have no idea who Montrez is but do know three things. He is male. The moniker is connected to Minimal Systems Recordings, the record label of English independent music development and production company Studio Toolz. And the track in composition and production is killer.

The relentless and alarming ‘Forces’ is from Meeting Forces, the new collaborative EP from the Belgian based producers.

Brazilian DJ/Producer ANNA’s new EP Razor was actually released on May 25 but appeared on Spotify only a couple of weeks back. The sharp feel of the title track is very much in keeping with its title and heavily utilises a vintage Roland MKS-80, one of her favourite hardware pieces.

After a warped and disheveled beginning. a commanding beat and hypnotic percussion unsuccessfully try to centre ‘Klade’ the opener of Blawan’s debut album Wet Will Always Dry’ as it continues on its mesmerisingly strange flight path into the experimental abyss.