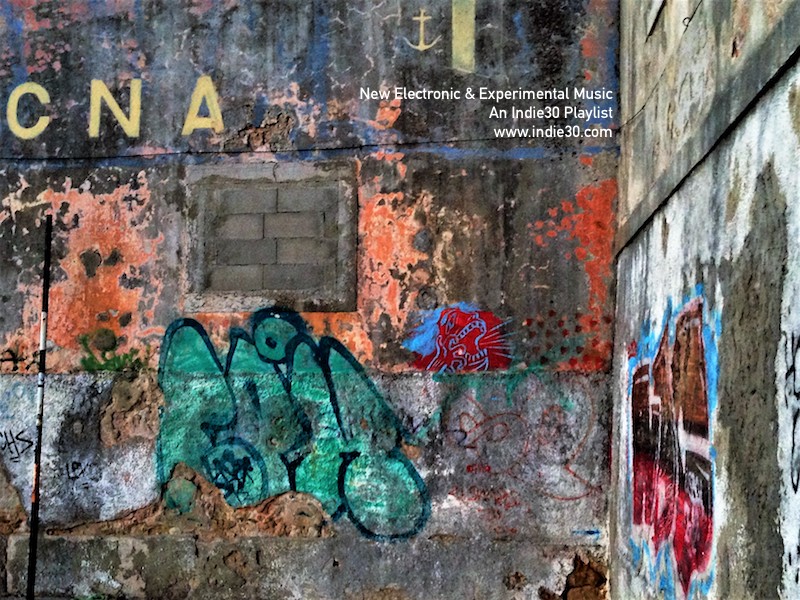 PLAYLIST UPDATE – AUGUST 7:  Added since the last  update: Dallas electronic producer Jake Schrock, our outgoing album of the week artist  begins proceedings with the stunning closer ‘Cerebral Shelter’ off his debut album Tropical Depression for Holodeck Records. Barcelona based Brazilian DJ/Producer Daniela Caldellas aka Terr with ‘Neuromancer’ off her new EP of the same name through Correspondent.Chicago experimental musician and producer Steve Hauschildt with opener ‘M Path’ from his new album Dissolvi, his first for Ghostly International. Helsinki electronic genre defier Jori Hulkkonen with the clever in sentiment and execution title track from his new EP out this Friday on My Favourite Robot, ‘Plastic Freedom’. English instrumental trio Haiku Salut return with the first single ‘The More & Moreness’ off their forthcoming album There Is No Elsewhere out September 7 on PRAH Recordings.

Three artists we’ve featured in the last ten days are next. Vilnius electronic techno experimentalist Gediminas Jakubka aka Patricia Kokett with ‘Mmuo off his Diabel EP on Dutch label Knekelhuis. St Etienne duo Losless with ‘Oodio’ off the EP Keyou for The Red Skull. And Rotterdam’s The Policy with their new single ‘Das Lebenslied’ on [Pias] Holland.

The deep and delicately arranged ‘Hubris’ from Earth Trax &  Newborn Jr leads the next batch of tracks. It’s off their new EP ‘If You’ on Shall Not Fade. English techno inventors The Black Dog deliver with the slow chug of ‘Literal Optical Slant’ from the Hoaxer EP 2 on Dust Science. Feliz Manuel, aka Djrum follows with ‘Waters Rising off his forthcoming album Portrait With Firewood on R&S, release date 17/8. Californian duo Mondo Lava are next with ‘Hippodrome’ from their recently released full length Ogre Heights out through Hausu Mountain. Hadamard’s Detroit inspired ‘Will To Power’ is one half of his contribution to a split four tracker with DJ Overdose for Code One, the new offshoot of veteran label Propaganda Moscow.

Swiss Italian all rounder N.O.T.E. has a new EP out called Night Frames on Tarletet and En Route’ from it is next before Bulgarian DJ/Producer Impérieux‘s glassy experimental house track, ‘Patron’ from his Veran EP.  Raime ends the recent updates with ‘The Nourishment Cycle’ from the Am I Using Content Or Is Content Using Me EP on Different Circles.

This playlist is part of a genre based series of seven 30 track playlists we are sharig using the Spotify streaming platform. Tracks are roughly ordered by release date and will be replaced by new tracks we like as they become available. To change things up from time to time we may change tracks from the same artist and release. All playlists are regularly updated and limited to original tracks only.

AN INDIE30 PLAYLIST ON SPOTIFY

PLAYLIST UPDATE – JULY 23: To celebrate the release of her long awaited debut album Dream Punching, Canberra experimental artist Emma Kelly aka Happy Axe leads off the 12 new tracks since our last update. Having been blown away by ‘Sevens Sounds’, ‘Cheshire Heart’ and ‘Prayers and Mantras’, our pick of the next best out of the three remaining substantives among the five brief interludes is the simultaneously ethereal and dense ‘Oblivious Objects’. The album is out through Spirit Level here.

The next new entry is ‘K-Town Blues’ is from Los Angeles left field electronic lo-fi artist Sports Coach who in just under two minutes manages to shame to shit out of the supercillious and selfish attitudes stemming from the morally conservative, economically neoliberal and socially disconnective nightmare that has engulfied the entire western world over the last 30 years. It’s out on MANIMAL. We featured Montreal producer and artist FOXTROTT last month with the brilliant ‘WAIT’ and she returns with cacophonous danceability on her new single ‘Better With You’ from the forthcoming second tranche of her Meditations trilogy of EP’s for One Little Indian set for August 10.

Next up is the title track ‘Amae’ featuring the deep and affecting vocals Felicia Douglass. from the new EP for Last Night On Earth by Brooklyn based house and downtempo producer BAILE while futuristic footworkist JLIN returns on Planet Mu after last years stellar Black Origami with a unsettling scream of a new single ‘The Abyss of Doubt’. That precedes the epic electronica of ‘Voyager’ from Wavescape which will feature on the next RV Trax compilation out August 3 from R&S boss and legend DJ/Producer Renaat Vandepapeliere. For a review of the first release go here.

London electronic and post-dubstep producer Allen Wooton aka Deadboy, released his new six track EP Psychic Hotline a couple of weeks back for Unknown to the Unknown and the Japanese and breakbeat inspired ‘Ryuichi’ is our pick. The ambient and connective ‘Embrace of Light from Los Angeles producer Evan Reiner, aka Gossamer. is next up from his new album Imperishable on Innovative Leisure before the trippy opening track ‘Transit’ from Amsterdam producer Tracey‘s new Outcome EP on Intergraded follows.

Three French releases we missed from late last month end the new additions. Nimes experimental techno and house producer Darlyn Vlys released a new EP Faux Semblants on Upon You late and the enthralling flip side ‘Orbital’ precedes the spectacular ‘African Melancholia’ the first single from Léonie Pernet for Paris label InFine, the home of La Fraicher and Clara Moto. Last but certainly not least is the techno experimentalist Bambounou with the divinely esoteric atmosphere and intricate rhythms of ‘Dernier Metro’ from his new EP for Disk, Parametr Perkusja EP.

PLAYLIST UPDATE – JULY 7:   Moscow electronic artist and producer Kate Shilonosova, aka Kate NV kicks off the latest batch of new tracks in our creative and eclectic electronic and experimental new music playlist. The delightfully surreal ‘YOU’, comes off her new album FOR, recorded DIY style in her apartment. The hypnotic shuffle of the cleverly written and arranged ‘Template’ follows from American electronic artist and producer Galcher Lustwerk  off his new album 200% Galcher. Look for this to feature prominently in our chart when we return to normal service in a week or so. The super unique voice of English artist Yazmin Lacey with the slightly off kilter soul of ‘Body Needs Healing’ is next from her new album When The Sun Dips 90 Degrees. The best track comes from Filipino born and Los Angeles based artist Mark Redito formerly Spazzkid returns with ‘Never Letting Go Of The Moment’ a tribute to his sister’s generosity and patience while he established himself as an artist. He is followed by ‘Planet B’, the closer from Beautiful You, the new album experimental ambient producer Khotin. The mood grows gradually more darker with another HTRK track as the Melbourne duo released their new double a sided single Drama yesterday. You’ve heard the superlative ‘Mentions’ in our Top 10, and the exploration into inadequacies continues on the flip in the form of the equally good ‘More To Enjoy’.

English producer Captain Over‘s thrilling ‘Clack Clack’ is next from his debut EP No One Ever Really Flies which ushers us into our more experimental grouping of tracks. He is complemented by alluring and otherworldly ‘The Selfix Job’ from Tokyo based French electronic artist Franck Collin, aka Fleck E.S.C who released his new EP Discrete Opinion yesterday, a work of busy precision.

The inexorable ‘Tunnel Stalker’ comes fromProvidence native and now New York/Berlin resident DJ Richard trades in techno’s dark arts and his new album Dies Irae Xerox is no departure in that sense. Rather its a doubling down on the darkness of Grind with the addition of hardcore and acid elements. Following is Berlin based Italian abstract techno producer Marco Shuttle who recently featured on the excellent compilation Flowers From The Ashes  of Italian electronic artists put out by fellow Italian Berliner Lucy’s Stroboscopic Artefacts. Two weeks ago he released the atmospherically dark four track EP Tropicalia. The mesmerising opener ‘Aural Dawn’ is our pick from it. The dark portion of the playlist is complete with the addition of German electronic composer Prequel Tapes and the delicate drone based and static infused enveloper ‘Two Moons’.

Irish experimental producer J Colleran finishes off the 12 new tracks with the pastoral beauty of ‘Freesia II from his new album Gardenia.

Last weeks additions – July 1: Left Field artist and producer Alexis Georgopoulos, aka Arp starts with ‘Fluorescences’ from his brand new full length album Zebra. Afriqua (Adam Longman Parker) brings some disciplined elasticity forth on his acid house number ‘Noumenon’ from the EP Vice/Principal. Berlin based Israeli exile Mor Elian, having already released three EPs this year is the latest to feature on DJ Seinfeld’s DJ Kicks series with the track ‘Sci Si’. La Fraicheur, the project of French artist Perrine Sauviat, who is also currently living in Berlin has delivered her long awaited album Self Fulfilling Prophecy, a diverse affair illustrated by the fact that tracks from the album appear on three of our playlists currently. These folk are joined by Abby Echiverri (the spell check fucked us last week and made it Echiverria), the latest artist on NY label The Bunker and Hostage with Shawn Rydiman & Happy Axe.