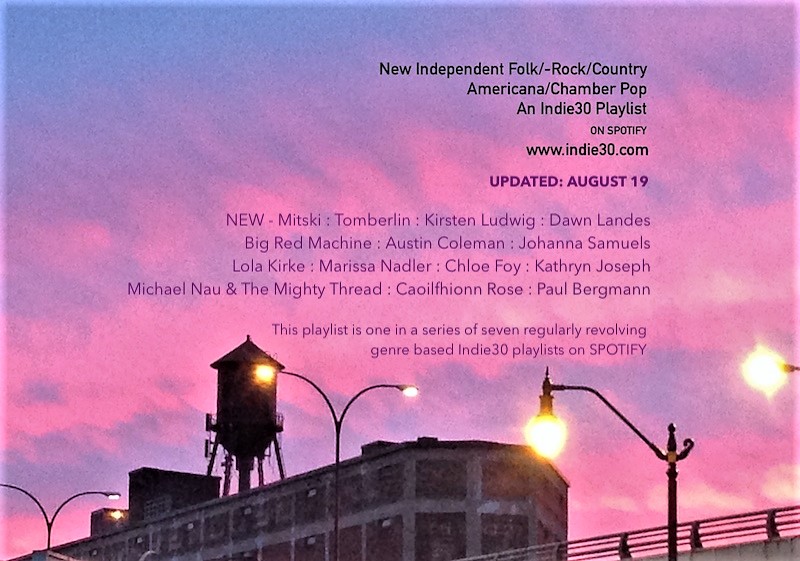 PLAYLIST UPDATE – AUGUST 19: It’s been fourteen days since we last checked in to give you the lowdown on the artists and the new releases that are chosen for our Folk/Rock/Country.Americana playlist. In those 14 days we’ve added 14 new tracks all of which are imbued with life in all its negative and positive colours.  We begin with Mitski and the poignant nostalgia of ‘Two Slow Dancers’ a stirring ballad full of yearning and honesty that closes the American singer-songwriter and multi-instrumentalist’s fifth and best record to date Be The Cowboy, released on Friday. Following that is searing emotion of Sara Beth Tomberlin‘s new single ‘I’m Not Scared’ which rounds on religion and relationships and can be found on her debut album At Weddings (Saddle Creek). It’s one that pulls no punches in its unflinching willingness to tackle the fragile fine line between keeping things together and totally falling apart  The third track comes from Calgary based artist Kirsten Ludwig with the beautifully unsettled ‘There You Are’. Read more about that and the album it will come from We Get It Now (Oscar St Records) in our previous article here.

For her new country record Meet Me At The River (Yep Roc), Kentucky born singer songwriter Dawn Landes relocated to Nashville from Brooklyn, convinced the legendary 86 year old Monument Records founder Fred Foster to produce it and collected a coterie of Nashville’s best musicians to play on it. It’s stellar results and its recreation of the instrument rich Nashville Sound which Foster is famous for should be no surprise to anyone. That instrumentation together with a dose of pedal steel characterises the busy yet spacious ‘Traveling’. Justin Vernon (Bon Iver) and Aaron Dessner (The National) have been writing and performing for a decade now as Big Red Machine and have a new EP out called Deep Green (Self Released). The country tinged title track, ‘I Won’t Run From It’ follows.

Atlanta based artist Austin Coleman is next with the opener and title track from his new album Long Mile From Home (Self Released) which precedes recent Los Angeles transplant and former New York City artist Johanna Samuels with the opening track and new single ‘Why Do I Go There’ from her defiant and honest new EP Have A Good One (Self Released). Next is Lola Kirke‘s closing track, ‘Point Of No Return’ from her debut record Head Heart West (Downtown). It’s telling on a number of levels but what it most reveals is her considerable musical abilities and at the end of the day that’s all we and she should care about.

The next offering is the second single ‘Blue Vapor’ an inspired piece of raw and haunting folk from Marissa Nadler‘s much anticipated new album For My Crimes (Bella Union) slated for September. If taken together with the nihilist title track that was the first single we’ve got one hell of a dark and deathly album coming. Next on the list is Manchester singer-songwriter Chloe Foy‘s atmospheric and tense new single ‘Asylum’ (Scope) follows and that dark mood continues on the ever underrated Scottish artist Kathryn Joseph‘s unnervingly brilliant ‘Mouths Full Of Blood’ from her new album From When I Wait The Want Is (Rock Action).

Michael Nau‘s soft rocker ‘On Ice’ from his new album with The Mighty Thread (Full Time Hobby) is next and attempts to bring some brief respite to proceedings and an escape from his own demons before 19 year old Winnipeg artist  Taylor Janzen contributes the closer ‘Better Now’ from her debut EP Interpersonal (2MM) which documents her ongoing struggles with not only her mental health but the absurdities that society produces in trying to deal with the subject. The penultimate track is the dreamy folk of the new single ‘Awaken’ by another Manchester based artist Caoilfhionn Rose (pronounced Keelin) before unassuming American crooner Paul Bergmann completes the new additions with ‘Death Of Me’  a reprise of a track he originally released two years back but one that struck him again just recently. In Bergmann’s own words (I’m just) trying to be on speaking terms with death. I think it’s important.” (quote from The Bluegrass Situation)

PLAYLIST UPDATE – AUGUST 5: Quick update since last week. New tracks from NYC singer-songwriter Odetta Hartman ‘You You’, the last single from her new album Old Rockhounds Never Die out this Friday (August 10) Winnipeg’s Taylor Janzen ‘The Waiting Room’ from her debut EP out this Friday* and Jordan Lee’s Mutual Benefit, ‘Shedding Skin’ from the forthcoming album Thunder Follows The Light out September 21 on Trangressive

*A rightly angst ridden treatise on the treatment has received for her own mental health struggles after being brought up in a hideous and stiflingy strict religious fundamentalist family.

This playlist is part of a genre based series of seven revolving 30 track Indie30 playlists share using the Spotify streaming platform. Tracks are roughly ordered by release date and will be replaced by new tracks we like as they become available. To change things up from time to time we may change tracks from the same artist and release if its from the same album or EP. All playlists are regularly updated and limited to original tracks only.

If you like what you hear don’t forget to activate the FOLLOW button on the Spotify page and add this to your playlists so you keep regularly updated on the latest tracks in these genres and FOLLOW US on Facebook and Twitter. The playlist can be played directly below.

PLAYLIST UPDATE – AUGUST 2: Thirteen salient delights have been added to our youngest playlist since we posted its first batch of tracks a couple of weeks back. Bordeaux based duo Queen of The Meadow, the project of Helen Ferguson and Julien Pras is first cab of the rank with the fighting melancholy of ‘Withdrawn’ off the forthcoming album A Room To Store Happiness which sees release on October 5. The same date is set down for C’est La Vie’, the  new album from Matthew Houck’s Phosphorescent. The first single is the celebratory countrified tropicalia of ‘New Birth In New England’. The driving Americana inspired ‘Light On The Ground’ from Seattle based artist Austin Crane’s Valley Maker and his new record Rhododendron is out a week later on October 12.

The versatile and unique folk stylings of ‘Les Miroirs’, the new single from New Jersey based Frenchwoman Tiphanie Doucet  is next before we get a taste of Austin based artist Molly Burch‘s new record First Flower (Captured Tracks) also set for release October 5. Luca Venter directed the video for the low down swinger ‘Wild’.

From the forthcoming album, ‘First Flower’, Captured Tracks. Out Oct. 5.

The new album ‘To The Sunset’ by singer-songwriter Amanda Shires is out tomorrow and her vocal power and versatility is all over the stunning ‘Parking Lot Piroquette’. Watch its self made video.

From the album, ‘To The Sunset’, Silver Knife/Thirty Tigers.

New York City singer-songwriter Jason Bemis Lawrence is set to release his debut album in September. The world weary warmth of ‘How Fast Can You Pack’ is the first single from Another Hotel Hallway and boasts the vocals of Heather Woods Broderick.  Next is the earnest ‘Receiver’, the second single from Might As Well With My Soul by Toronto’s Little Kid which is followed by the luminescent hymn like ‘Deep In A Haze’ from lo-fi folk duo New Indiana off their new album Darkness Sunshine out in two weeks.

The new single ‘What Hurts Worse’ from Sam Beam’s Iron & Wine is a grand ramshackle affair coming from his wryly named new EP The Weed Garden. Out at the end of August, its made up of offerings that didn’t make last year’s Beast Epic.

Another Austin artist, the Americana and folk inspired Nichole Wagner finally got the chance to record and released her debut album And The Sky Caught Fire funded through a kickstarter campaign. Its an impressive first outing and the latest single from it is the deceptively light and expertly augmented ‘Yellow Butterfly’.

With Alison Crutchfield’s band Swearin’ making a comeback, her sister Katie has teamed up ex-Swearin’ member and her Waxahatchee producer Keith Spencer to release a stripped back EP Great Thunder, the name the duo recorded two albums of material under at the time of the Cerulean Salt recordings.  The next track in our playlist is its first single, ‘Chapel Of Pines’  accompanied by a Christopher Good directed video.

From the forthcoming EP ‘Great Thunder’, Merge. Out Sept. 7.

The final track complete with Kevin Gosset directed video is ‘The One I Love’, the throwback folk-rock inspired new single from Night Shop, the project of Justin Sullivan, formerly the drummer for Kevin Morby and Cassie Ramone. His debut album In The Break is out September 14 on Mare Records.

The One I Love

From the forthcoming album, ‘In The Break’, Mare Records.

JULY 21: Our Indie30 genre based 30 track playlist series is complete with the release of our Independent Folk, Folk-Rock, Country, Americana and Chamber Pop playlist. It’s taken us a while to select these 30 tracks as these are genres we’ve been voyeurs rather than connoisseurs of for many years, loving individual releases by individual artists that cross our path but never quite getting into each genre in enough depth. Therefore, we wanted to make sure we were sharing not only independent tracks and artists but also quality music. We think we’ve done pretty well.

The futuristic brand of folk emanating from Chicago artist Gia Margaret gets us started with deeply affecting and self released ‘Smoke’ which is sitting at 22 in our main chart while Exeter, England based singer songwriter George Holman’s Peacock Affect follows with his delightful genre blending mix of folk, rock and chamber pop in the form of ‘If I Could. Both tracks are self released. Lexington duo RYVOLI released their debut EP Theories a week back and are riding high in the chart at present with the exquisite ‘Ulysses’. Out of the remaining unreleased tracks from it we’ve gone for the gorgeously rich ‘East’. Next is Los Angeles based Cornelia Murr with the delicately sparse closer ‘You Got Me’ from her debut album Lake Tear of The Clouds released through Autumn Tone last week. The ultra personal ‘Milk’ from New York City’s Samia (Samia Finnerty) rounds out the tracks released in the past week. Other artists in the 30 include self released tracks from Vaudeville Etiquette, Lyla Foy and Eden Mulholland as well as two other tracks currently in our Top 30, Marissa Nadler‘s ‘For My Crimes’ and Odina‘s ‘I’ll Carry You’. You can access our current Top 30 chart here while this playlist is below.