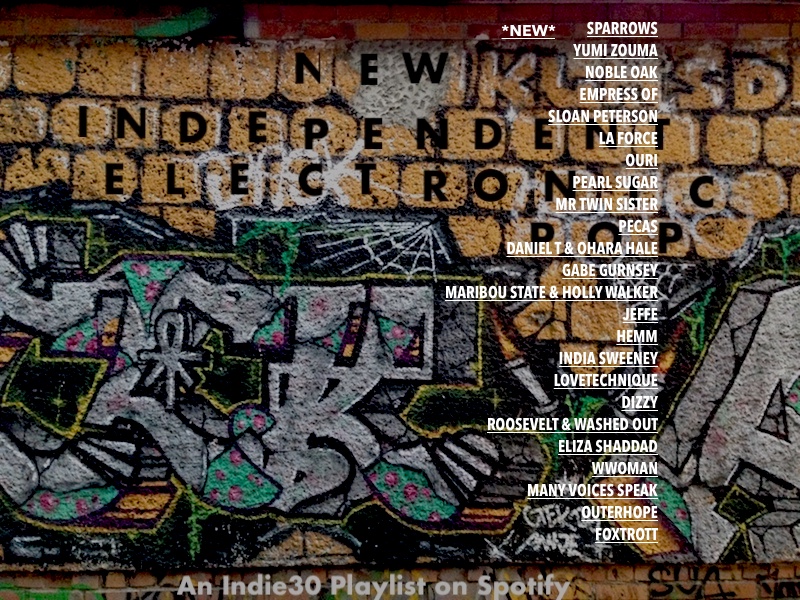 AUGUST 28 UPDATE: An absolutely to die for stack of new additions to our New Independent Electronic Pop playlist across the month of August leading off with Sydney artist and producer Jessica Nitties aka Sparrows (Stoney Roads) with the tribal, electronic and house inspired, ‘Over & Out. Christchurch pop quartet Yumi Zouma are next with the upbeat groove of ‘In Camera’ (Cascine), arguably their breeziest song for years while the incredible density and beautiful instrumental mix which merges on the traditional and the electronic ‘Stare Into You’ (Self Released), follows from Canadian artist Patrick Fiore, aka Noble Oak.

Empress Of, the pop project of Honduran-American Lorely Rodriguez is next. She has announced a new album called Us set for October 19 on Terrible Records and the first single, ‘When I’m In With Him is an excellent half English half Spanish sung work of pop perfection. Following that Sydney DIY artist Joannah Jackson aka Sloan Peterson has released ‘Our Love’ from her self titled debut EP (Mirror) set for September 15

Other new tracks are in order of play;

Ariel Engle of Broken Social Scene has released a new single under her new solo project La Force and the first single is the multi-dimensional ‘TBT’ through Arts & Crafts. Montreal producer/multi-instrumentalist Ouri has a stellar new single out on Ghostly International called, ‘Escape’. Pearl Sugar is the synth pop project of American Chris Bugnacki and the slow dance of ‘Scarlet’ (Self Released) is his new single. Mr Twin Sister have been banging’ out the singles, four in all over the last two months and the latest, ‘Power Of Two’ (Self Released) delves beyond skin deep. Brooklyn’s Sandy Davis aka Pecas, returns to the playlist with the second single off her After Dark EP (Broken Circles), Girl Wonder (One More Chance)’ as does Daniel T’s collaboration with Ohara Hale, ‘Call’ off his forthcoming debut album Heliotrope (Cascine). Factory Floor’s Gabe Gurnsey ‘You Can (Dance) is an impressive affair and comes from his new record Physical (PIAS), Maribou State have teamed up with Holly Walker to produce the sleight of hand disco of the title track off their new EP Nervous Tics (Counter).

In a super month of releases by Australian pop artists, the standouts come from the aforementioned Sparrows, JEFFE  ‘Undecided’ (Self Released), Hemm ‘Emerging With The Day’ (Spirit Level) and India Sweeney ‘Go Try It’ (Stoney Roads). Lovetechnique return with their new one ‘Right Here’ off their forthcoming self titled EP.

Oshawa’s Dizzy have their new album Baby Teeth (Communion) out and the new single from the Canadian quartet is the melancholy yet endearing ‘Bleachers’. Marius Lauber, the German producer known as Roosevelt has joined with Ernest Greene’s Washed Out to produce ‘Forgive’ the first decent bit of chillwave since 2012 on Greco-Roman.  The vocals of Eliza Shaddad (Beatnik Creative) on her expansive new single ‘This Is My Cue’ are as silky smooth as ever. wwoman are from Pittsburgh  and self-describe their music as “depression pop”. There’s nothing depressing about their new single ‘FOA’. ‘Chances’ is the third single from Tank Town (Strangers Candy) by Swede Matilda Mård aka Many Voices Speak while finally the sparkly nostalgic pop of ‘Out To Sea’ (Shelflife) from Outerhope who are Manila sibling duo Micaela and Michael Benedicto completes the new tracks.