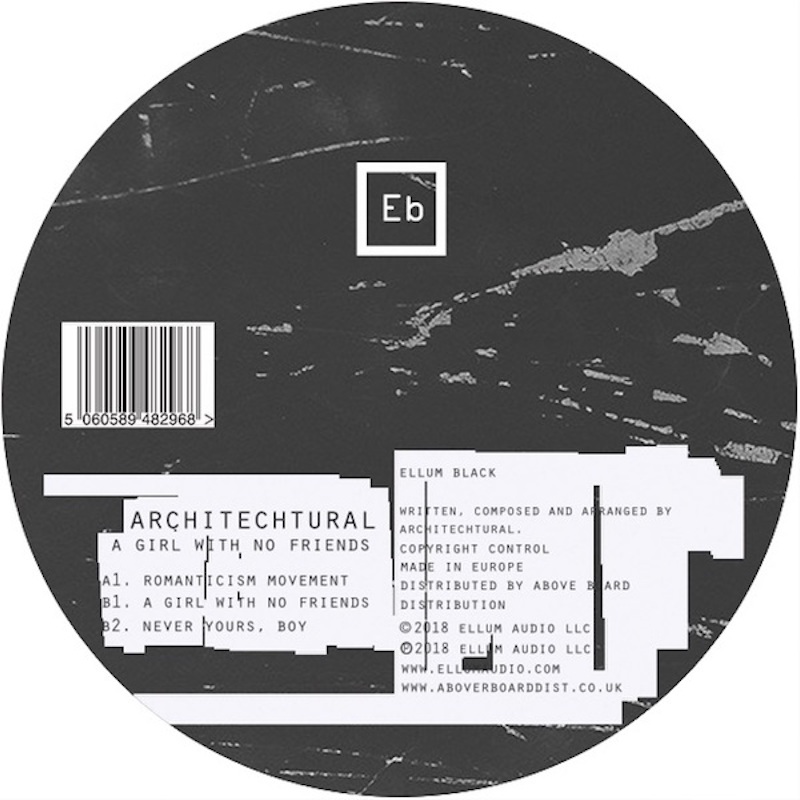 “For me a real artist is someone who doesn’t base his or her art in making money, even though you must live from it…but at the time of creation you cannot be thinking of the money you might make or what you make is going to sell or not. Unfortunately, we must fight all the time against that because…it ends up defining how you are going to live. But a true artist is the one who frees his or her inner side, his or her way of expressing, without concern for any objective (and) not caring about what people will say or what he or she will make from it”
Juan Rico Static Project Episode #018 – “Automatismo Psíquico Puro” – The Man Behind Architectural & Reeko

After laying waste to the joint back in June as Reeko with four salient blasts of withering intensity from his For The Right Hemisphere Brain Damage EP, Spanish techno producer Juan Rico has returned in his more staid Architectural guise for the release of his superlative new EP, A Girl With No Friends. It contains three meticulously constructed high quality techno cuts that come as a textural set but differ markedly from each other in composition and style. The EP is also indicative of Architectural’s reason for existence; to express the more emotional and sentimental side of Rico’s personality. And each Architectural release has seen this expression manifest itself in different ways through focusing on and drawing it out of one or two particular elements. On A Girl With No Friends, its on the low end and the groove.

As much an expert at driving techno’s straight lines hard and fast as Reeko as he is utilising the deft and subtle to create emotive grooves as Architectural, Rico’s ability to traverse techno’s wide spectrum and be comfortably at home expressing himself from anywhere on it is indicative of the innate connection he has with the genre. However, it takes more than just natural ability to produce such quality in this realm. It also comes from Rico’s penchant for spending long painstaking hours in the studio experimenting, creating and refining as well as his serious love and intense respect for techno music.

This last point is central to Rico’s modus operandi as an artist. He sees himself as an artist who has a real responsibility to take risks and move the genre forward through embracing truths from within whatever the surreal like nature of the result. Thus it is not only ability, dedication and respect for the genre that give him the assurance necessary to innovate and push boundaries, its also the freedom that stems from divorcing the creative process from how the end product will be received. And that freedom is clearly at work on A Girl With No Friends as Rico creates deep emotion in both movement and texture.

Side A is occupied solely by the minimalist deep techno grooves of ‘Romanticism Movement’, a hypnotic 11 minute epic highlighted by the commanding emphases given to its ultra consistent beat cycle. This allows for the realisation of a languid and unhurried groove that is complemented by a variety of oscillating frequencies and understated shimmers of ethereal synth. The track’s signature riff slowly appears and is tightly welded to, in enticing and lasting fashion, the aforementioned rhythm. The attractive result affords Rico the opportunity to uses minimalist techniques as mere embellishment to the track’s slowly enveloping emotive soundscape. And it’s a soundscape that will be further developed on the EP’s flip side.

Side B leads with the EP’s locomotiv like title track, increasing the pace but maintaining the minimalist flavour established on the opener. Fully rounded bass and thin oscillating arpeggio  create an intense and compact rhythm as Rico turns his attention to manipulating atmosphere through use of frequency and effect. Frequency is also used to lasting effect on the deliberative ‘Never Yours, Boy’ which sports a broken low end arpeggio and a beat that work together at a controlled simmer as emissions of flat acid attempt to mess with its rhythm and pollute its rarified atmosphere. All three tracks above all demonstrate Rico’s uncanny ability to pinpoint exactly to the millisecond where a track’s groove needs to be at any given time. And it is groove more than anything that drives this Architectural release.

In terms of moving the genre forward, the last three recordings Rico has created or contributed to realise that in spades. His importance to the future of techno’s underground is clear to see when Architectural’s A Girl With No Friends and Reeko’s For The Right Hemisphere Brain Damage are considered alongside their immediate forebear, the brilliant self titled full length by Seleccion Natural created with fellow master techno experimentalists Oscar Mulero, Valentin Corujo (Exium) and Hector Sandoval (Exium, Tensal). Formed for the 10th birthday of Mulero’s seminal record label Polegroup, with each of the four members separately writing their parts at distance, Seleccion Natural was a lesson in simpatico and writing from the gut. Add in Sandoval’s Graphical LP as Tensal and Mulero’s Electric Shades EP and you don’t have to be ultra smart to know where techno’s best qualities have been coming from in recent months.

Rico’s ability to produce the futuristic point of difference techno found on A Girl With No Friends after 20 years in the game stems from the integrity he employs as an artist and his close and unbreakable bond with the genre. And its these qualities and the music made because of them that highlight just how important independent artists like Rico, who go about their work without fear or favour, continue to be in forging techno’s vibrant and healthy future.

A Girl With No Friends is out now on Maceo Plex’s new side label Ellum Black complete with misspelt artist name on the sticker. Juan Rico’s attention to detail obviously didn’t extend to the label art. Buy a copy here. The exceptional eleven minute wonder, ‘Romanticism Movement’ is streaming below.

From the EP, ‘A Girl With No Friends’, Ellum Black.