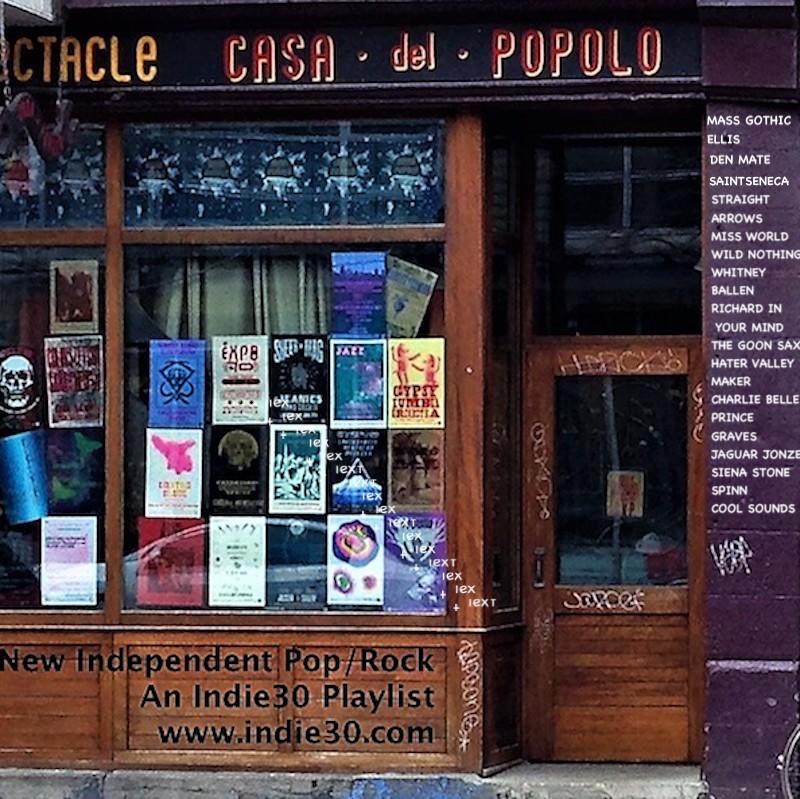 SEPTEMBER 7 UPDATE: It’s been a while since we checked back with an update of all things guitar based in our pop/rock playlist but there’s always a great deal going on new music wise with additions most days and 18 tracks have been added since then. They begin with the almost noise pop like ‘Call Me’ from New York partners Mass Gothic off their new album I’ve Tortured You Long Enough on Sub Pop released today. Canadian artist ELLIS is next and follows up ‘The Drain’ with the dreamy chords dominated ‘What A Mess’, her self released new single. The cautionary and dark new single from Washington D.C. based outfit Den-Mate, the band led by Jules Hale with their new single ‘Charlotte’ from the upcoming album Loceke on Babe City Records out 28th September. Following that is Art Rock outfit Saintseneca with ‘Ladder To The Sun’ from their latest record on Anti, Pillar Of Na.

Next sees Sydney garage rockers Straight Arrows begin a quick one two punch with the abrasively groovy first single from their forthcoming album On Top out October 26 on Rice Is Nice and the blow is completed by equally heavy hitting ‘Diet Coke Head’  from MISS WORLD from her forthcoming debut LP  Keeping Up With Miss World out September 28 on PNKSLM.

‘Canyon On Fire’ by Jack Tatum’s Wild Nothing from his new album Indigo out through Captured Tracks is next while Sydney psych pop quintet Richard In Your Mind‘s inviting ‘I Hope You Weren’t Waiting Long’, the second Rice Is Nice single from August, follows. It’s from their forthcoming album Super Love Brain set for a September 21 release. Seattle’s Whitney Ballen is next up with ‘Fucking’, a track about cheating amidst a swirl of low self esteem from her debut record, the tellingly named, You’re A Shooting Star, I’m A Sinking Ship on Father/Daughter. That precedes the latest and third single ‘We Can’t Win’ from We’re Not Talking by The Goon Sax. Chapter Music will be releasing this gem in the 14th September.

Malmø’s Hater are next with the nostalgic ‘Fall Off’ from their forthcoming second full length Siesta out September 28 on Fire Records before Valley Maker‘s exquisite ‘Don’t Let Go’ from his new album Rhododendron out October 12 on French Kiss. Austin duo Charlie Belle recently self-released their jaunty yet super smooth new single ‘Essay’ and that is followed by Tokyo band Prince Graves who we were alerted to through an email from their label de.te.ri.o.ra.tion with the dreamy lo-fi psych of ‘Take Me To Your Planet’. Brisbane artist Jaguar Jonze comes after that with her musical polymath of a debut single ‘You Got Left Behind’ on Deena Lynch and precedes the catchy wistful glide of the self released ‘Freewheeler’ from New Zealand’s Siena Stone.

Liverpool’s SPINN have the penultimate spot of the 18 new tracks with the glistening and angular ‘Shallow’ on Modern Sky before the Custard (country version of) like ‘Cactus Country’from Melbourne’s Cool Sounds rounds out proceedings. It’s the title track on their forthcoming new album set for October 26 on Osborne Again.

For past tracks read the older updates below the playlist.

This Pop/Rock playlist is part of a revolving genre based series of seven 30 track playlists we share on the Spotify streaming platform. Tracks are roughly ordered by release date and will be replaced by new tracks we like as they become available. To change things up from time to time we may change tracks from the same artist and release. All playlists are regularly updated and limited to original tracks only.

AUGUST 13 UPDATE: Multi instrumentalist Katherine Paul is set to deliver the debut album Mother of My Children for her new project Black Belt Eagle Scout through Saddle Creek on September. It’s first single, the enticingly raw lo-fi sludge of ‘Soft Stud’ gets the updates rolling in our Pop/Rock playlist. Following that is the dramatic post punk of ‘Distance In The Line’ the second ever single from Melbourne outfit Dark Fair and out through Poison City Records. It’s their second ever single. The third new track is from David Loca’s Part Time who has teamed with Ariel Pink for the yearning ‘I Can Treat You Better’ off his upcoming album Spell#6 set for a November 2 release on Burger Records and Tough Love. English five piece Llovers are fourth up with their new single ‘Go Get Her Go Getter’ out on Modern Sky.

Next up is ‘Shallow Water’, the new and third single off Indigo will be the last from Jack Tatum’s Wild Nothing before that album drops August 31. That’s followed by London outfit Cosmic Strip, who have a new self released single out called ‘Heavenly’. It’s the first track to come from an as yet to be announced debut EP out later this northern hemisphere summer. The upbeat and optimistic ‘World’s Last Payphone’ is next from Washington DC trio Dot Dash who recently released their new album Proto Retro on Beautiful Music. New York’s Wild Pink released their new album Yolk In The Fur in late July and the latest single ‘Love Is Better’ completes the update.