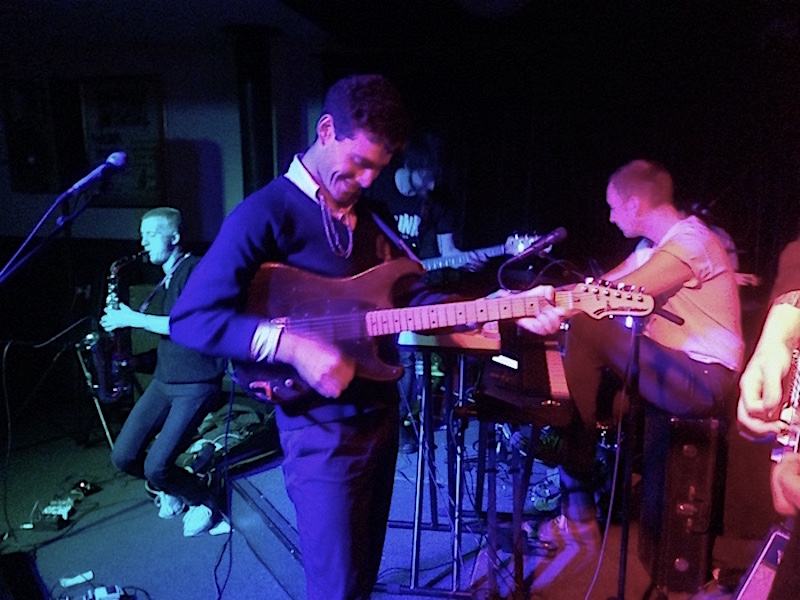 “Thanks for humouring us for so long.”
Nicholas Kearton & The Ocean Party.

Seminal Melbourne via Wagga Wagga pop outfit The Ocean Party have announced that they will call it a day after almost a decade this week. We’ve had the feeling since the tragic passing of the beautiful and talented Zac Denton late last year that there was little chance the rest of the band could or would continue without him. After eight full-length records, the latest being last year’s The Oddfellows’ Hall, an assortment of EP’s and years of touring far and wide together, the band have stated they cannot and will not go on without their “brother, friend and bandmate”. If only the end could have come on the band’s own terms and at a time of their own choosing. Cruelly this was stolen from them.

The sextet’s final release will be an EP called Nothing Grows, a six track collection of songs written by Zac himself which were due to be released by the band this year. His prolific songwriting and determination to release material in quick fire fashion is clear to see from his mountain of work in not only The Ocean Party over his six years with the band, but also through his pivotal and leading roles in Ciggie Witch, Pregnancy and Hobby Farm—not to mention his contributions in all areas musical, production and otherwise, with many other artists over the journey, including producing his brother Lachlan’s two LP collaboration with Emma Russack last year. In addition to these six tracks, word has it there is far more to come from Zac Denton.

Listen to the title track from the EP below; it is at once understated yet lush, stilted yet smooth, urban and knowingly nocturnal yet agricultural and wishfully wistful in its never ending search for the innocence of yesteryear before the ravages of climate change and the economic downturn of the bush. A mirrored metaphor to the often empty city experience of his adulthood. It also comes replete with a multitude of winding melodies and Zac’s unmistakably fragile, humble, yet supremely affective vox delivering his usual wry and deeply intellectual and allegoric musings on relationships young and old. Despite its seeming observational surrender ‘Nothing Grows’ is a track the defiantly glows with a self-effacing inner confidence, a shy man coming to peace with his own prodigious talents and abilities; yet, like the duration of the entire release itself, echoing in hindsight with the unfinished business of a life unfairly abbreviated.

Pre-order Nothing Grows on vinyl here through Spunk (update – vinyl already sold out) if you live in Australia or New Zealand and here through Emotional Response (ROW – limited to 100 copies only (vinyl still available at time of writing).

From the forthcoming EP, ‘Nothing Grows’, Spunk/Emotional Response. Out on March 14.

A word from Indie30 about The Ocean Party

Zac’s passing has affected everybody who is or has been associated directly or indirectly around this blog greatly but its nothing compared with the loss to his family and friends, who have been in our hearts these past two months. While we expected an announcement like this would likely be more forthcoming than not at some stage, the end of something so special is never easy to witness, especially in such circumstances. Reasons aside, we deeply respect and admire once again the manner in which the entire community has supported these guys and their families and friends during this harrowing time. For a nicer, more humble and beautiful bunch of fellows you will not meet in music or anywhere else for that matter. They would not like me saying this but this outpouring of love is a result of the love they gave us, through their motives, their actions and their music. Our music world has been changed forever by The Ocean Party’s existence and we deeply thank in turn Lachlan Denton, Liam Halliwell, Curtis Wakeling, Jordan Thompson, Mark Rogers and Zac Denton for the pleasure their gifts have bestowed upon and brought to us over all these years.

We look forward to what the future brings musically and otherwise from all of you.

The band will be doing a short four date farewell tour in March. We appropriately leave the final word to the band themselves penned by their long time friend, collaborator and Cool Sounds bassist Nick Kearton and released on their socials this week.

James Stocker (on behalf of all associated with Indie30).

A statement from The Ocean Party

“After eight LPs, a handful of EPs and the better part of a decade worth of national touring, we’re calling it a day on The Ocean Party. After our brother, friend and bandmate Zac Denton tragically passed away in late 2018, we felt that writing new material without him wouldn’t feel right and the time has come to call it quits. We’ve been incredibly fortunate to have been able to do this together for so long. This band has been such a big part of our lives for such a long time, that it’s going to feel really strange to end it. It’s been a way of making friends across the country, a way of seeing some amazing place around Australia and the world, a way of feeling validated artistically and most importantly an excuse to spend countless amounts of time together.

We’re going to all miss being a part of The Ocean Party and we really want to give it a proper send off. Before his passing, Zac had written an EP of songs that we were going to release at some stage in 2019. Zac was an ardent believer in releasing music and his extensive back catalogue at the age of just 24, is evidence of that. This EP is a great example of what an amazing songwriter he’d become and this EP, titled ‘Nothing Grows’ is some of his very best work. We’re going to have a few copies of it on vinyl and we think you’ll really like it. We’re going to ask some friends to help us sing Zac’s EP, then we’re going to play a second set that we’re calling (very liberally) ‘The Greatest Hits’. We’ve been really lucky to have had so many amazing friends and fans come to shows over the years and we’d really love to see all of your faces while we play these songs one last time.

Hope to see you there and thanks for humouring us for so long.”

Yesterday we released the first song from an EP of beautiful songs that Zac wrote before his passing late last year. The EP is called ‘Nothing Grows’ and it’s a real showcase of what an excellent songwriter Zac had become. We also announced that we’re going to do a tour to launch it and that they will be our final shows. We’re going to play the EP in full and then play a greatest hits set.

We’re really excited to play the songs one last time and to share it with everyone! There is a link in our (instagram) bio with ticket details and pre-order links for the record.

Thanks for all your support for so long and hope to see you at one of these shows.

The Ocean Party on Indie30

THE OCEAN PARTY SHARE NEW SINGLE FROM THE ODDFELLOWS’ HALL