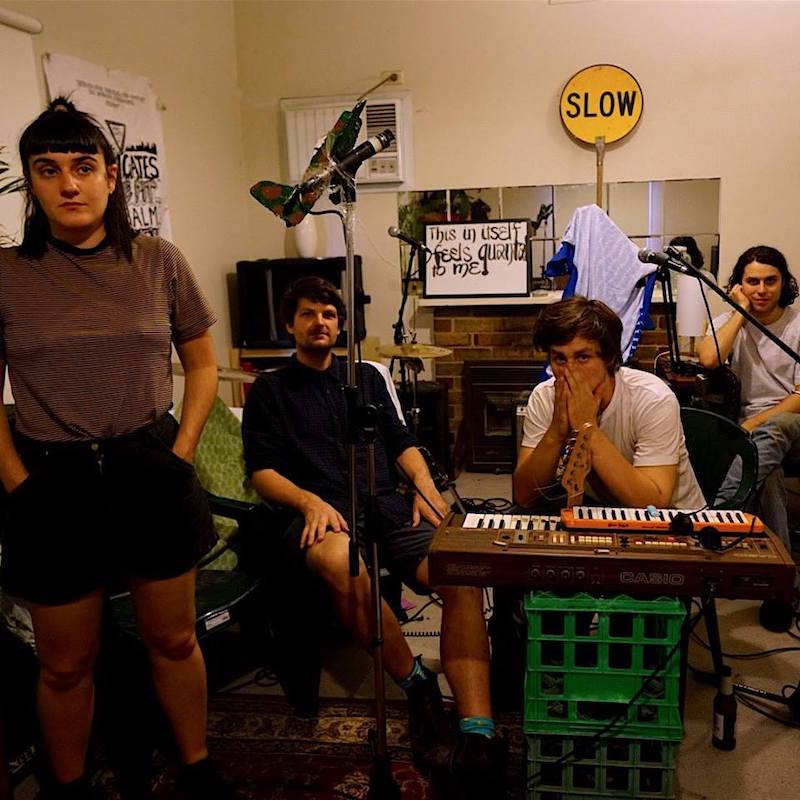 Melbourne quartet The Stroppies, an amalgam of artists from far too many bands to mention* released their delightfully put together debut album Whoosh last Friday. Unlike their first two releases (a single and an EP which were home recorded as a trio), for the album the band’s mainstays and principle songwriters, Claudia Serfaty and Gus Lord decided to enlist guitarist Adam Hewitt as well as welcome Rory Keane on drums in the wake of the departure of Stephanie Hughes. Despite only being able to afford two days, they also elected to bring their recorded creations to the studio for the first time with the helping hand of friend and guitarist Zachary Schneider (Free Time, Totally Mild) to imbue them with a little more sonic depth and give the subtle yet rather beguiling song structures what they ultimately deserve really. According to Serfaty,

“It was an attempt to take working processes that had been established in a home recording setting and build on them with a broader musical palette in the studio in order to push the band into new territory without compromising what made initial releases so endearing. We spent hours building up, stripping down and mixing the work that had been recorded the month prior, throwing everything we could think of at the songs to see what would stick. We utilised whatever was on hand to pull sounds, including but not limited to vintage synths, rain sticks and an old door frame that we used for percussion”.

It was mission well and truly accomplished. Whoosh consists of 10 bittersweet tracks of super smart independent guitar based pop in the best of its traditions, that is self effacing but quietly confident and armed with an authentic modus operandi and a healthy dose of self aware and social irreverence for life’s absurdities, big and small. While delivered with a personal bent and rather lyrically abstract at times, both Serfaty and Lord in their unassuming delivery are not afraid to take on the contradictory malaise currently eating away at humanity’s future. On ‘Entropy’, ‘Present Tense’ and ‘The Spy’ and more indirectly on a few others they are far from impressed with environmentally unsustainable growth for its own sake to feed an ultimately unsatisfying and ultimately shallow small minded culture obsessed with meaningless shit and buying things. Nor are they with the never ending inequality of opportunity in a world economy that is essentially corrupt to the core – a stacked deck of corporatism and monopoly capitalism backed by neo-liberalism.

Musically, The Stroppies are kaleidoscopic in their nods to many of guitar pop’s genres, influences and styles over the journey. Folk, psych, jangle, punk and alt-pop are all present. Indeed, when asked to describe the main musical influences behind Whoosh, Lord was quoted as saying;

“…the last 60+ years of guitar-based pop music in some form or another. This includes everything from Bill Fay to the Clean to Stephen Malkmus.”

Both in style and intent, there’s a playfulness and a sense of fun on the surface of Whoosh represented in its accessibility and the aforementioned well worn influences lovingly revered and represented. But it doesn’t take much to notice there is much more going on than meets the initial ear. The unlikely twists and turns that each track takes and the fact that each member is willing to go the distance with the odd extra beat, note or extension of a melody or a lead break to take them to unlikely places is uniquely satisfying. That’s not to mention the thrilling embellishments, whether they be electronic or organic which adds polish to the still scuffed up yet definitive pop substance on offer throughout.

Listen to the two singles, the instructive and organ heavy ‘Cellophane Car’ and the pacy punkish vibes of opener ‘Nothing At All’ complete with videos below. Whoosh is out now on Tough Love Records. Buy here.