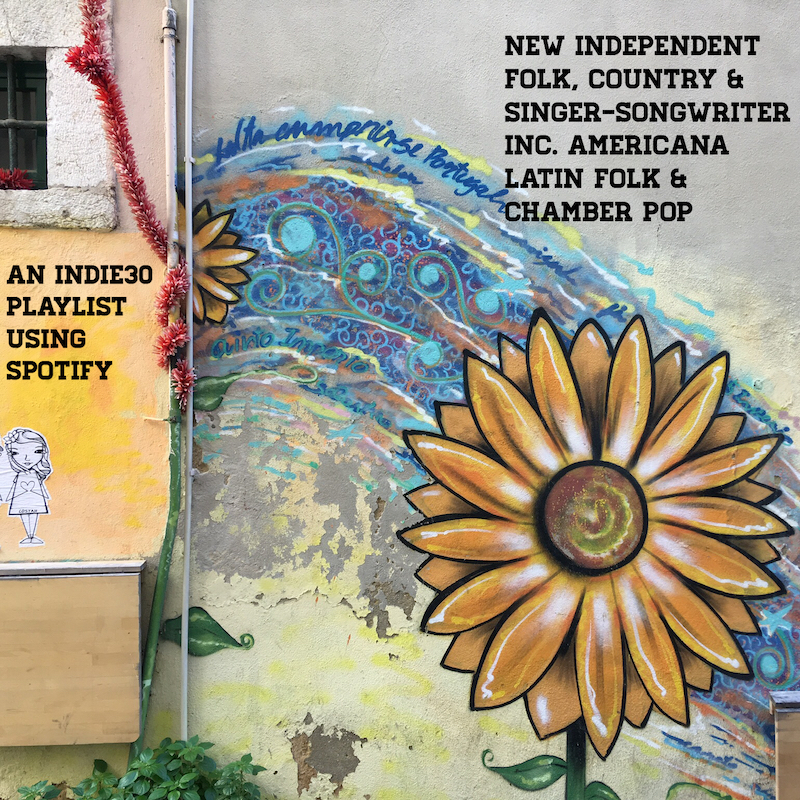 Now into his third decade as the quinessential independent music artist, Los Angeles based singer songwriter and multi-instrumentalist Andrew Bird is set to release the self-deferentially named My Finest Work Yet his twelfth solo album. The swooning ‘Manifest’ is the second taste from it and heads up our current New Independent Folk Country and Singer-Songwriter Playlist using the Spotify platform and is one of 18 newly released tracks from last week.

placeholder is the excellent new record from one of our very favourite independent artists Meg Duffy aka Hand Habits. We’ve already included all the lead up singles in this playlist and you now find each of them sitting pretty with all the other tracks previously featured in this playlist in its version of our Tracks of 2019 series. Today to mark the release of placeholder we add the delicately soothing ‘pacify’ to the New list.

Portland based Taureg artist Ahmed Ag Kaedy then brings his mesmerising folk to proceedings with the plaintively insistent of ‘Adounia’ the opening track from his heartfelt and politically charged new album Alkaline Kidal. Ag Kaedy was exiled from his Northern Malian home for the crime of being a guitarist and playing music by a group connected to the odious and despotic extremist organisation Al-Qaeda in the Islamic Maghreb who control a large swathe of both Mali and neighbouring Libya including his homeland of Kidal. The militants even threatened to cut off his fingers should he continue to defy them.

The Baltimore duo Laura Wortman and Kagey Parrish aka The Honey Dewdrops are next with the poignant opening track from their new and fifth long player Anyone Can See and they are followed by the earnest ‘Desperado’ from Minnesota’s The Cactus Brothers, the country music project of Page Burkum and Jack Torrey.

The fragile melancholy of ‘Folding Chairs’ from Melbourne artist Tanya Batt aka BATTS follows and is from her debut album The Grand Tour due April 12. The transience themed new single ‘We Don’t Stay’ from Omaha singer-songwriter Betsy Phillips backs on to that and prefaces the quiet defiance of ‘Fight’, a duet between Nashville singer songwriters Mary Bragg and Robby Hecht from the former’s new album Violets As Camouflage.

‘Coyote’, the rock tinged first single from Brooklyn’s She Keeps Bees is next and comes from their forthcoming new album Kinship set for release May 10. Cardiff’s Novo Amor has teamed up with Chicago’s Gia Margaret for a double A-sided single and the short and bittersweet ‘Lucky For You’ is our pick of the two. Following that is the hypnotic stream of consciousness like ‘L-48’, the shortest track from the new album, I Also Want To Die In New Orleans from San Francisco based artist Mark Kozalek’s Sun Kil Moon project. For the seven track 90 minute experimental opus he was joined by saxophonist Donny McCaslin and Jim White of the Dirty Three.

The dreamy country tinged ‘Strange News’ from Melbourne artist Esther Edquist aka Sweet Whirl is next and comes from her upcoming release in early May with Chapter Music, an EP titled Love Songs & Poetry.  The shuffling beauty of ‘Curtain Of Rain’ follows from Montreal artist Yves Jarvis off his new album The Same But By Different Means before Athens, GA based artist Adam Klein delivers a slice of pop infused country in the form of ‘Look Out (Doraville)’ from his new record Low Flyin’ Planes.  Dundee based Su Shaw aka SHHE, who formerly released music under the moniker Panda Su, has released a haunting piece of electronic chamber pop simply titled ‘BOY’ which will be accompanied by a re-release of ‘Eyes Shut’, her well received single from last year. One Little Indian is giving the two tracks the 7″ vinyl treatment.

Veteran Mississippi musician Luther Dickinson and the wonderfully named recording ensemble Sisters Of The Strawberry Moon follow with his long time collaborator, Memphis vocalist and upright bass player Amy Lavere, taking control of proceedings on ‘Hallelujah (I’m a Dreamer)’. It’s from the forthcoming Solstice, a new collaborative album he recorded with the “Sisters”, in reality a dizzying array of talent that included Fife & Drums player Sharde Thomas, as well as the Como Mamas, Birds of Chicago, and Woodstock based singer-songwriter Amy Helm among others. It arrives on March 22.

Desert Dreams is the name of the new album by London based Hill Country Blues inspired outfit Lonesome Shack, a trio led by Seattle raised finger picking guitarist Ben Todd. The swinging country track ‘New Dream’ is our pick from it. It precedes Camper Van Beethoven founder Victor Krummenacher‘s upbeat country rocker ‘Blue Pacific’ the title track from the final record in this list to be released last week.

This playlist, loving curated and regularly updated, is limited to 30 brand new tracks at any given time can be accessed below or if your prefer spotify’s web player here. All tracks removed from this playlist can be found in our the Folk, Country & Singer Songwriter version of our Tracks of 2019 series here.