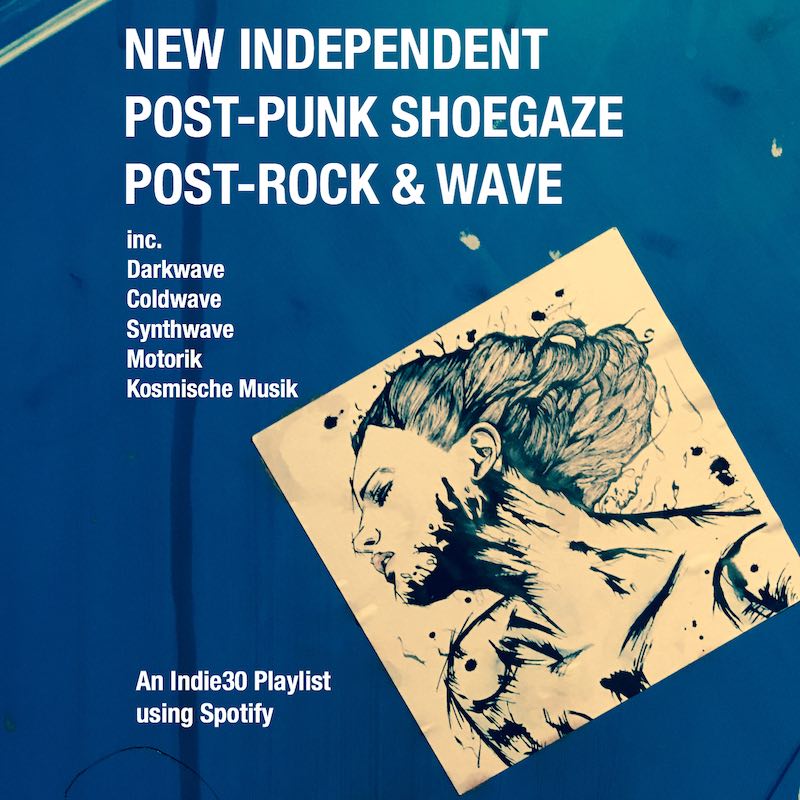 We begin this month’s update of our New Independent Post-Punk Shoegaze Post Rock & Cold, Dark & Synthwave Playlist using Spotify with both tracks, ‘Landlords’ and ‘4chan’, from the new 7″ single from socially conscious Londoners The Cool Greenhouse. All profits from the release go to the London Renters Union, “a member-led, campaigning union standing up to landlords, standing up for tenant rights and transforming the housing system through collective action”. They are followed by the self described popsicle punk of New York trio QWAM with the raw and manic ‘Buy A Toy’. Melbourne’s Skydeck are next with the synth and bass line dominant new single ‘Solid State’ from their forthcoming debut Eureka Moment which surfaces on Friday. The wonderfully named Brooklyn punk quartet Surfbort have a four track blink and you’ll miss it 6 minute EP out called Billy and the title track from it follows.

Anthony Gonzales aka M83 has returned to largely pen the soundtrack to the new Queer Slasher film Knife & Heart. For the 27 track album, he’s enlisted a bit of help from the likes of German post punk electronic veterans Malaria!. Their pensive ‘Thrash Me’ is the soundtrack opener and that is next. Following is a track from New York composer and arranger Simon Hanes’s Tredici Bacci, who are back with a sonically kaleidoscopic new album La Fine Del Futuro. The motorik driven ‘Minimalissmo’ featuring the amazing vocals of Sami Stevens is our pick for this playlist. Boston outfit Community College are next with the fragile ‘Gasoline’ before  London quintet Housewives, united by an intense hatred for neoliberalism are next with the jarringly affecting ‘Sublimate Pt 2’, the third single to be lifted from their anarchic new album Twilight Splendour out March 22.

Veterans The Get Up Kids are next with new single ‘Satellite’, the first new material from Kansas City outfit in eight years. It’s from their forthcoming album Problems. Atlanta trio The Coathangers follow with the driving and ramshackle ‘Stasher’ off their new album The Devil You Know. A dose of post rock makes an appearance with ‘It All Goes’, a deeply contemplative seven minute mixture of shoegaze and kosmische musik from the Australian collective Romeo Moon. French artist Sébastien Pietrapiana aka Kuta is next with their muscular synth driven new single, ‘I Cry At Parties before Australian artist Goo Munday enters the fray with the motorik inspired ‘Eyes’, a great synth based track with a great pressure valve like beat. That’s from her new album 9 Lives.

Glasgow punk quartet Vital Idles are next with the powerful closing track ‘Careful Extracts’ from their new self titled EP before Memphis equivalents Nots, a band we’ve featured in the past, join proceedings with the angular and atmospheric ‘Half Painted House’ from their upcoming third full length appropriately titled 3. All Your Sisters have a new album coming out next month called Trust Ruins. Next is the full, heavy and snarling new single to be lifted from it ‘Self Medicating’. Toronto industrial synth punks Odonis Odonis return with a new single ‘Collector’ and that’s from their forthcoming new album Reaction due April 12.  Melbourne throwback punks The Snakes just released their self titled debut and are next with the downwardly mobile tongue in cheek ‘Open Space Living’.

Next comes Houston post punk outfit Astragal, who have a dark and affecting new single out titled ‘Moderne Luxury’. It comes from their second EP, simply named II. Following that is the pulsating and sparse ‘March’ from Washington D.C. non binary artist Olivia Neutron John who has their debut self titled album coming out in May. The Detroit trio Ritual Howls are next with the dance ready beat and bass heavy ‘Thought Talk’ before Queens, New York City artist Alexandra Drewchin aka Eartheater follows with italo-disco inspired synthwave jam, ‘Concealer’ from label Doom Trip’s upcoming compilation. English outfit Clinic are next with the hypnotic dark synth driven post punk number ‘Rubber Bullets’ which will come from their forthcoming album Wheeltappers And Shunters out in the Northern Hemisphere summer.

Gareth Liddiard, Fiona Kitschin, Erica Dunn and Lauren Hammel aka Tropical Fuck Storm have a big fat angry fuck you new single out called The Planet Of Straw Men which will see release on 7″ vinyl with the unlikely B side to be a cover of Can’t Stop by Missy Elliott – why fucking not. The fuzzed out ‘Resident Daisy Cutter’ from New Jersey outfit Hello Whirled, the project of Ben Spizuco off his new album out this Friday brilliantly titled Skin At 15 Degrees is next. Following on from that is Dublin’s FONTAINES D.C.. who have taken things down a notch in comparison to last year’s blast furnace of a track ‘Too Real’ with their rather sentimental new single ‘Roy’s Tune’. German artist Sofia Portanet is next with her relentlessly electrifying new single ‘Wandering Rat’ as is Tijuana’s Mint Field with the kosmische and motorik hybrid ‘Ella Se Queda’ from their new EP Mientras Esperas. The trio of Mike Kinsella, Steve Holmes and Steve Lamos aka American Football have enlisted Land Of Talk’s Elizabeth Powell for their immense new single ‘Every Wave To Ever Rise’ lifted from their forthcoming album Silhouettes, set for release on March 22.

Access the playlist below or if you prefer listening through the Spotify web player go here. Every track removed from this particular New Independent Music playlist which is limited to 30 tracks at a given time to keep things fresh can be found in our Post Punk Shoegaze Post Rock & Wave Tracks of 2019 Series here.