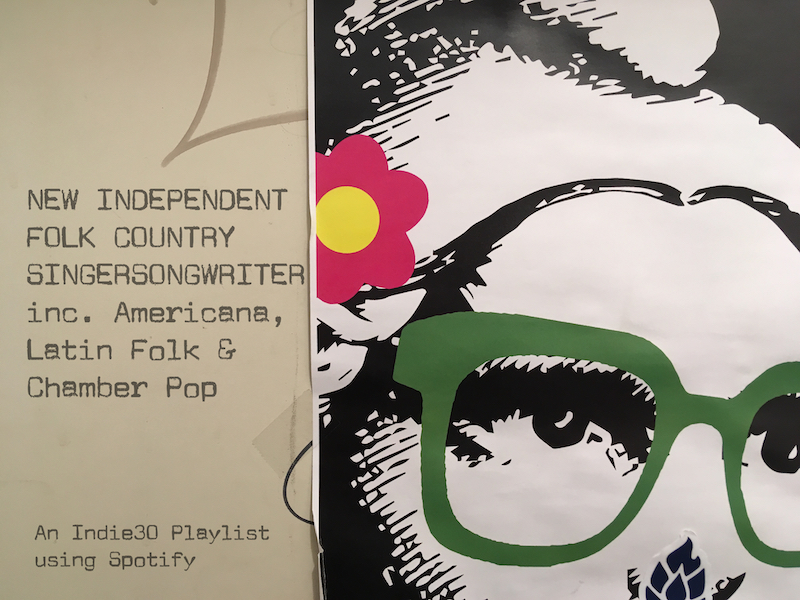 We begin our New Independent Folk, Country & Singer-Songwriter (inc. Americana, Latin Folk & Chamber Pop) Playlist update with the glistening lo-fi goodness of ‘Will You Miss Me’ from Melbourne singer-songwriter Jo Schornikow from her brief but substantive debut record Secret Weapon out today through Keeled Scales. The classic folk stylings of the lilting ‘Bird’ is next from Los Angeles artist Azniv Korkejian aka Bedouine from her upcoming album Bird Songs Of A Killjoy out May 31 on Spacebomb. Winnipeg artist Taylor Janzen follows with ‘Shouting Matches’ the brilliant title track from her forthcoming second EP out May 3. Read our post on that here. Lausanne singer-songwriter Nils Aellen aka Soften, backs on to that with his heartrendingly delicate new single ‘Necklace’ which will appear on an album set for release in October this year. Alt-country outfit Son Volt, the band that centres on the songwriting of Jay Farrar, released their new album Union today. It’s a searing political document and the title of the track ‘While Rome Burns’ which is next says it all about the state of the United States under its uncaring, unfeeling and downright hateful right wing leadership dominated by a particularly brutish and nasty form of toxic masculinity. You know, the one who likes to denigrate, disrespect and disparage half of its country’s population. You know, the one that likes to wreak destruction on ordinary working class and middle class people by smashing wage rises, destroying what little healthcare is fair in America. You know, the one that cuts government funding completely from unnecessary things like the Special Olympics as well as removing federal support for special education programs and children with disabilities.

Berlin based Swedish artist Emma Elisabeth is next with ‘Pilot’, a deeply personal track centring on the search for self-empowerment and that is followed by the traditional yet unique folk stylings of Melbourne artist Lucy Roleff with ‘A Woman’s Worth’, her complex take on a similar theme. The artistic relationship between Drugdealer (Michael Collins) & Weyes Blood (Natalie Mering) continues to bear fruit with ‘Honey’ a number coloured with desire and understanding wrapped in a musical cloak of nostalgia from Collins’s forthcoming record Raw Honey out on Mexican Summer on April 19.  The glacial beauty of the humility of ‘Nothing Sacred/All Things Wild’ is next from American artist Kevin Morby‘s upcoming fifth album Oh My God due a week later and that precedes ‘Do Something Today’ from Cormac Neeson, frontman for The Answer. His debut solo record White Feather is out April 12.

English singer-songwriter Lucy Rose is up next with ‘Save Me From My Kindness’ from her musically superb and lyrically deeply emotional and self aware fourth full length No Words Left out last week through Communion. New York City artist Hannah Cohen follows with ‘Wasting My Time’, a track of growth and realisation from her forthcoming third record Welcome Home due April 26 on Bella Union. Sofia Wolfson appears next with ‘Remind Me’ with an acerbic attack of being dehumanised, cut out and silenced by men in relationships. It’s from her affecting new record self released record Adulting out now. The towering talent of Courtney Marie Andrews is next with a stripped back acoustic version of ‘Took You Up’. That track, full of sincerity and heart warming beauty comes from her newly released four track EP of acoustic recordings taken from our Number 2 album of 2018 May Your Kindness Remain. Norwegian artist Øksendal is next with the yearning ‘Stay For Dinner‘ from his new record of the same name.

Next up is the touching ‘I’m Over Now’ from Brooklyn based Elliah Heifetz with some help from Utah born musician and singer songwriter Jane Bruce. They are followed by two esteemed American independent artists. First up is Andrew Bird with the deep, sprawling yet measured ‘Bloodless’ from his brand new record My Finest Work Yet released last week. He is followed by Damien Jurado who takes the spartan road on his upcoming new record after his last three outings with Richard Swift adding the “bells and whistles”. The metaphorical ‘Throw Me Now Your Arms’ comes from In the Shape of a Storm, his new album of first takes recorded in less than two hours. It’s out April 12 on Portland’s Mama Bird Recording Co. T. Hardy Morris channels Tom Petty next on his faithful cover of ‘Scare Easy’ from Mudcrutch, the outfit who first gave notice of the late musical legend. Following that is London singer-songwriter Brudini with the standalone single ‘Reflections’, an eerily atmospheric dose of piano and string laden chamber pop.

Fourteen years after the Into The Reins EP Tuscon legends Calexico have teamed again with Sam Beam aka Iron & Wine for a new album Years To Burn due in June. The first single is the Americana inspired ‘Father Mountain’. Following that is former 13ghosts frontman Brad Armstrong with the slow building full blooded ‘Carry Your Head High’ off his forthcoming album I Got No Place Remembers Me out April 19. Then let yourself be taken away by the superlative simmer of the atmosphere new single ‘White Tail’ by the criminally underrated Heather Woods Broderick. Her new album Invitation is out on April 19 on Western Vinyl. Toronto artist Charlotte Cornfield, whose excellent first single ‘Andrew’ we covered as one of our first posts of this year releases her new record The Shape Of Your Name next week. She has released its sparse last single before release, ‘Silver Civic’. and that is next. Los Angeles artist and La Luz frontwoman Shana Cleveland follows with her powerfully deep latest single and title track, ‘Night Of The Worm Moon‘ from her forthcoming album also out next week on Hardly Art.

Austin outfit Sun June follow with ‘NYC’, the fourth single from their upcoming record Years out on Keeled Scales in June and backing that is the gorgeous ‘Calling Long Distance’ from Aldershot quintet Matthew & The Atlas, the band that centres around Matt Hegarty. Their new album is Morning Dancer and its out on May 10. Kurt Wagner’s Lambchop follows with another track ‘The Air is Heavy And I Should Be’ from their idiosyncratic electronic tinged new record This (Is What i Wanted To Tell You) out now on City Slang. Icelandic artist Högni Egilsson aka Högni follows with his new piano dominant standalone single ‘Paradísarmissir‘  before Weyes Blood weighs in again and completes proceedings with ‘Movies’ from her album also out next week Titanic Rising which we featured earlier this week here.

Access the playlist below or if you prefer to use the Spotify web player go here. And remember every track removed from this 30 track playlist can be found with 208 other in our Tracks of 2019 Series: Folk/Country/Singer-Songwriter here.