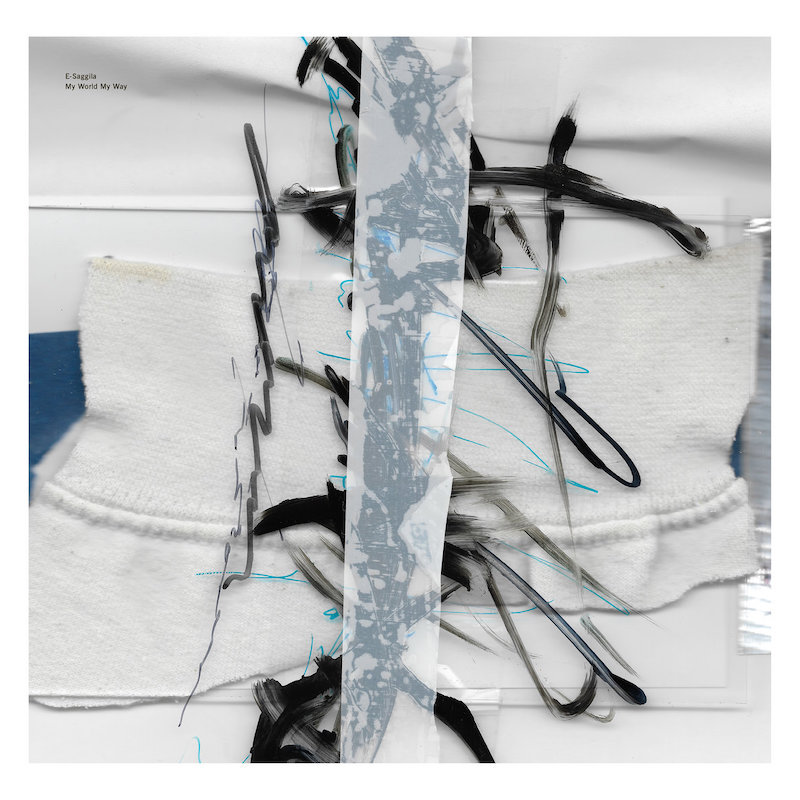 Toronto experimental techno producer Rita Mikhael aka E-Saggila has released her brief but stunningly powerful new album My World My Way on Stockholm left field techno label Northern Electronics. It follows on from last year’s excellent Dedicated To Sublimity for Bank Records where her penchant to utilise a vast array disparate and oppositional elements and canny ability to wed them together seamlessly into her unique form of industrial and ambient techno came through clearly. What also came through just as clearly was an understanding of nuance and her ability to reflect social and political complexity through music both thematically and symbolically. That subtle application of ambient music and use of atmospheric motifs is evident again here as is Mikhael’s acute political and social awareness and her refusal to put any limits on her forward thinking techno palate.

On My World My Way, she ratchets up the hard side of those juxtaposing forces through samples, signals and effects as well as using disorienting elements of gabber and noise to great effect. The tracks serve as both a no holds barred representation and a visceral response to the decrepit state of world decision making and the alienation and disconnection caused by overbearing technology. The toxic culture that produced this state of affairs has been fuelled by the divisive and selfish power of neoliberal politics which has seen the return of social conservatism and the turning the back on the vulnerable. A politics where power is now with corporations who become so large and so powerful and governments so weak and so ineffective that citizens are now virtually powerless. A powerlessness and alienation derived from omnipresent technology made indispensable, a tacit acceptance of passive-aggressive, guilt apportioning and gaslighting forms of organisational power, not to mention the ongoing damage done to women, the LGBTQI community and greater society by false and outdated notions of gender, gender inequality and a romantically warped and distorted view of femininity. All under a sexist male dominated system that applies sinister double standards to sexual matters and calculatingly undermines and ridicules the potential power that femininity must play at large, deprives women of opportunity and excludes them from decision making power and most evil of all — power over their own bodies. It is this toxic culture and society that rewards in spades the three drivers of toxic masculinity, sheer vanity, virulent insecurity and naked ambition, traits that have and continue to cause so much damaging violence in the world. No wonder the anger in both the expose and the payback is so palpable.

The sheer weight of violence stemming from these dangerous human conditions can be heard on the hammering pace of the unyielding 137bpm ‘Pattern Obligation, the apocalyptic opener ‘Aziza’ a sonic metaphor for the power of a Category 5 cyclone and the doom filled aura of ‘Alia’, her collaboration with Chicago producer Thoom whose desperate pleas and gutteral screams are deeply unsettling. On the crushingly mournful ‘Stars Dying In Succession’ she works to highlight the sheer emotional and psychological damage done to people by a false and vacuous system deliberately engineered to encourage and produce an acceptance of inequality, economic insecurity and social division. Closing track ‘One Last Midnight’ with its chamber music appeal and Oil Thief’s frightful vocals leaves one no doubt as to the gravity of the situation. This is simply mirroring a world where, after 30 long years of harsh neoliberal economics and a reboot of social conservatism, the avarice and greed of culturally narrow and economically powerful interests are celebrated and their oppositional qualities of selflessness and generosity, social diversity and the idea of integrity before wealth are either misappropriated, abused, denigrated and/or dismissed.

However, Mikhael doesn’t trade in nihilist thinking, nor has she ever been one dimensional in using her music to invoke a withering wave of social criticism. On tracks like the determined ‘Crimson Liquescence’ and the title track she also simultaneously works to contrast this by applying subtle musical representations that denote that human beings also possess laterally moral, ethical and deeply empathetic qualities. Both tracks can be taken to serve to highlight the defiant efforts associated with the everyday struggle to endure, dampen and temper as well as the urgency needed to resist and stop the unfolding horror show, projecting and providing a lasting detour from the road to self-destruction. The contrasts are present on title track in particular, where the soothing sounds of the Maghreb sit comfortably and defiantly amid the rising tension and heightened drama. The possibilities that existed at a pivotal point during the so called ‘Arab Spring’ and the scale of the betrayal that came in its aftermath come immediately to mind.

But crucially My World My Way not only signifies E-Saggila as a project that artistically and musically represents the true state of the world as it is regardless of reaction or reception. It’s also one that’s deaf to the gnawing discomfort its truth causes or to those who can’t or won’t appreciate its boundary pushing, left field and experimental tendencies in a techno context. On a thematic level, it’s also is indicative of an artist with a deep theoretical and contextual understanding that human societies are by their very evolutionary nature liquid and dynamic. Like the world it was released into, on the surface this record reeks of malevolence and brutality but like that world it also possesses benevolence and beauty. And even though these educative and hopeful elements of ambient introspection play second fiddle to the maelstrom caused by those overbearingly dark forces, on this record at least those forces and their intensity have been unleashed and subsequently controlled Mikhael’s adept composition, execution and production.

Whichever way you interpret it or the direction which you come at it from, when it is all said and done, My World, My Way is, on multiple levels, a record of individual, personal, political and social resistance. It possesses an intellectual and conceptual depth reflected by its sonic complexity and overall thematic tone, more than adding to an already impressive discography. These two factors give fair indication that as E-Saggila or in another guise, Rita Mikhael will not only continue holding truth to power during what is certain to be turbulent and tumultuous times but also play a pivotal role in shaping the future of techno and electronic music in general.

My World My Way is out now on esteemed Swedish label Northern Electronics. Buy a copy here.

From the album, ‘My World My Way’, Northern Electronics.

My World My Way