RECORD REVIEW: JENNY HVAL (NOR) – THE PRACTICE OF LOVE 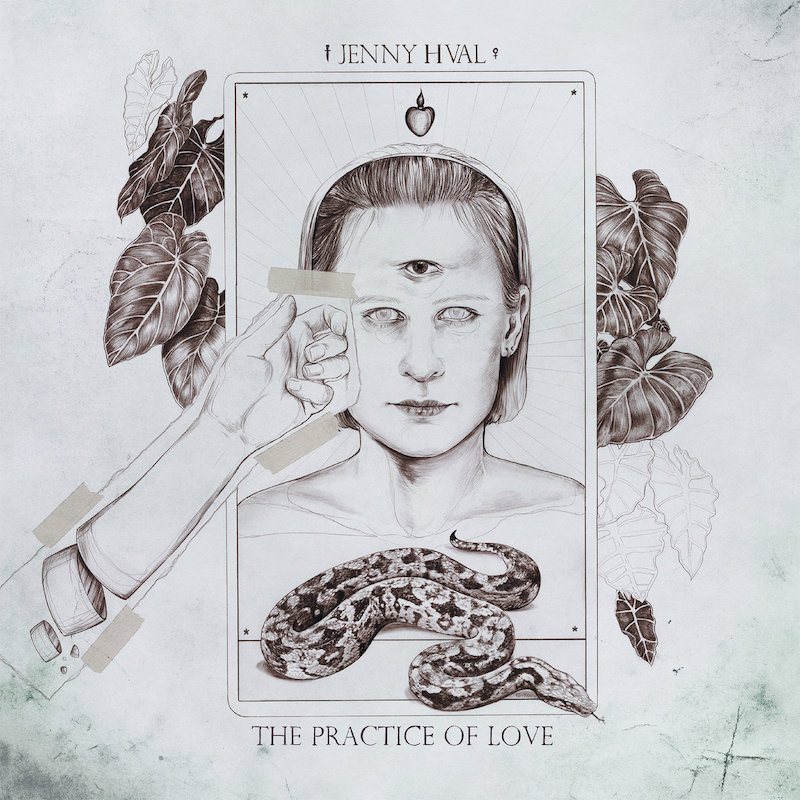 RECORD REVIEW: JENNY HVAL (NOR) – THE PRACTICE OF LOVE

On her seventh album The Practice of Love, Norwegian artist Jenny Hval again brings her considerable intellectual weight to proceedings and produces through an exploration of otherness a probing treatise on an emotional state that more often than not conjures up the most emotionally complex of conundrums. She does quizzically and critically both through seeking an understanding and a reckoning with her own troubled connection with love and piercing the false perceptions that exist within both cultural and social constructs of what we have been led to think what love is, what it represents and what its supposed to do. Of how in practice love has been subsumed, controlled and measured rather than being allowed to be what it actually is, free, open and holistic. How its focus been turned inward preventing human beings from connecting with the outside, nature and the environment.

Hval derides the simplistic encouragement to understand and respond to love as a goal to attain, an uncontrollable feeling, see love as romance to get lost in. Metaphorically instructive, Hval’s hypothesis is that love much than simply relational or centred on want or need. By viewing the practice and results of love in a wider context both in a historical and contemporary context, she counters the tendency of reducing it down to something to be worthy of.  Hval finds as much contentment and catharsis in the difficult questions she poses as she does in the answers revealed. And by taking a third person, out of body view of herself and keeping a respectful distance from her vantage point in the forest and elsewhere to the protagonists she enlists, she keeps the subject and its associated vignettes the focus. That sense of self awareness and social acumen allow for love and its results to be humbly observed and detailed, not as an inexplicable feeling to be overwhelmed by but as tangible and utilitarian. Not to ask what it is, but what it does and has done. And from that angle and with Hval’s intellect and artistic touch, a done to death cliche topic becomes one of keen interest.

In multiple respects and ways, Hval can be seen to be cautioning anyone from seeing love as nostalgic and mainstream, pining for a time where dominant partner based relationships produced a “simpler” existence, that most false and outdated practice, the marriage “lasted” and “you knew where you stood” (you can hear the said cisgender male at the core of those words). From a clear eyed feminist and humanist perspective, on ‘The Accident’, the title track and the closer ‘Ordinary’ she uses solemn imagery, metaphors and historical references to highlight the reverberating consequences of childlessness and the unwarranted and unwanted expectation that causes even the  women, even those most strongest and certain in their choices, a sense of guilt and shame. Double standards in sexual matters  as does regret of the economic disadvantages from lack of support for the life choice inevitably lead to The untold and unnecessary damage done to a woman’s sense of self worth and self confidence under the weight of  personal, spousal, social and now political.

When love for a woman was reduced to marriage and marriage reduced to duty and motherhood with every other possibility outside it curtailed and subsumed, women knew exactly who determined notions of love and how those notions determined behaviour and expectation. Reduced to that singular role in life for millenia, with little freedom, projected upon, objectified and held to the standard given them by another, women were deemed second class citizens in every respect, voices unheard, desires not only unmet but ridiculed. Even their role of nurturer and carer was and still is taken for granted and not remunerated or assigned its appropriate economic value . Femininity was and still is denigrated as uncertain, unreliable and a source of weakness when in essence its strength is manifest and was and still is in essence unappreciated and unloved. Such was and still is the overarching context in which love was practiced for half the population, many still without the necessary agency or dealing with the legacy of it, still in many cases damned if they do and damned if they don’t.

Music wise, Hval emits her intellectual musings on love both real and contrived through an episodic electronic prism of song, soliloquy, anecdote and conversation. The Practice of Love is undeniably pop centred, containing some of the most the most readily digestible compositions she’s written, witness the connective ‘High Alice’, the infectiously familiar ‘Ashes To Ashes’ and the Balearic and motorik inspired IDM of ‘Six Red Cannas. That said, Hval’s signature left field and experimental leanings are ever present. A watchful almost voyeuristic pulse that circles at the start of ‘Lions’ reflects the aforementioned forest and its unknown character, while spoken word attempts to give you the key to its secrets. Its second half is indicative of the urgent need for humanity to find love for time, nature and in the minutiae of things. A surreal ambient swirl backs the cryptic nature of layered conversations taking place simultaneously while The searching horns and diffuse vocal arrangements on ‘Thumbsucker’ reflect the attempt to make sense of hazy recollections and childhood memories.

The abstract nature of the record is built partly through by Hval’s personal inspirations for the album, both conceptual and interpretative. Taking the idea of a northern forest untouched and unspoiled by human touch reflects love’s purity taking musical cues from poet and musician Ingrid Chavez who write Madonna’s ‘Justify My Love’, getting inspiration from poet Juliana Spahr’s links between motherhood and the environment and writer Kathy Acker’s resistance to and dissecting of literary tradition. Then there’s the imagined trip with Amelia Earhart, Georgia O’Keefe and Joni Mitchell. Equally, the perspectives from the three guest vocalists expand that abstract canvas and the gravitas of the subject. Singaporean Vivian Wang contributes her take on politics and power, French experimental composer Félicia Atkinson her heavily pregnant musings to her unborn child and the ongoing existential conversations with Australian artist Laura Jean Englert are vital to the flow and nature of the inquiry and a further understanding of love’s relationship with self worth.

Through these personal and collaborative processes, love’s utility in its myriad of forms is measured and exposed in deed and misdeed and perception and misperception. In staying outside her subject matter and maintaining her observer status despite the obvious vulnerability in laying bare her troubled relationship with it, Hval actually conducts somewhat of a reclamation of love. And from it comes a reminder of love’s all-consuming and omnipresent nature. It has a universal lack of regard for exclusivity and its refuses to be packaged up or lie dormant within traditional, narrow and unsatisfying social constructs. It steadfastly refuses to be held hostage to hetero, paternalistic or binary attempts at power plays or be ridden roughshod over by selfish human centred world views. Through uncovering what it can not be, she highlights the indestructible omnipotence of love in size and shape, colour and movement recovering it from current practice and restoring it from its contrived social construct and anaemic state. From a feeling largely singular, aspirational and elusive to its rightful place as communal, accessible and utilitarian, tangible, practical, pliable. Conceptually and musically in method, composition and explorative depth, The Practice of Love is yet another stunningly cerebral statement from one of the independent music world’s most consistently salient and critically vital artists.

The Practice of Love is out through Sacred Bones and Su Tissue and is available here. Listen to the 90s inspired

From the album, ‘The Practice of Love’, Sacred Bones/Su Tissue