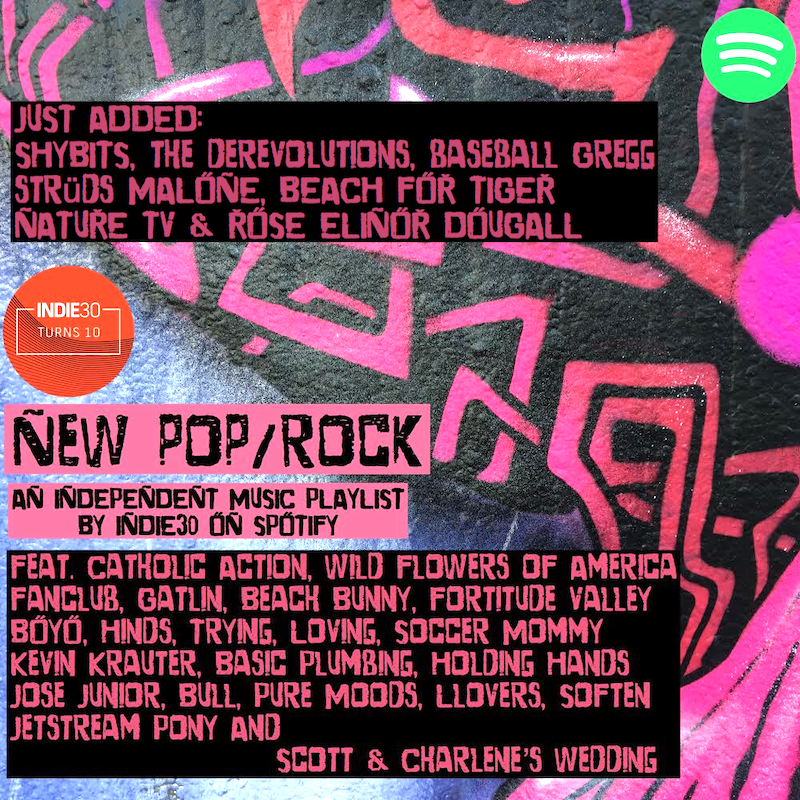 UPDATE of an update – added December 10: We were to finish  for 2019 with our New Pop/Rock Playlist on Spotify yesterday but there’s just too much good music out there to share so we’ve added seven more great tracks to finish with a real bang. They are the energetic new single from Berlin based garage/pop/punk outfit Shybits, sketchy grungy lo-fi pop from Boston outfit The Derevolutions, the touching art pop of Stockton via Bologna duo Baseball Gregg and the gorgeous bedroom guitar pop of Vancouver’s Strüds Monroe. We’ve also added the nocturnal psych pop of London quartet Beach For Tiger, the sparkling jangle pop of Brighton’s Nature TV and the punchy lushness of Rose Elinor Dougall.

Things are fast coming to a close for 2019 music wise but nobody seems to have told these artists. Our final update to our New Pop/Rock Playlist on Spotify is one of our strongest lists for the year and starts with Glasgow quartet Catholic Action and their new casiotone inflected krautrock inspired single ‘People Don’t Protest Enough’. It’s a sentiment shared by many as we all flounder under crushingly selfish and self-injurious neoliberal rule. There’s intensely catchy retro pop from Philadelphia’s Wild Flowers of America who just released their debut LP Lost In The Salvation Army and more than tidy new singles from Nashville-based countrified pop artist Gatlin Thornton aka Gatlin, Austin outfit Fanclub, and Los Angeles quartet Beach Bunny.

There’s a track from the new EP You Don’t See Me from another Los Angeles based artist BOYO, some “awkward” power pop from Durham band Fortitude Valley, a new lo-fi beauty from Spanish outfit Hinds, a reassuring number from Columbus quartet Trying‘s new EP I Just Can’t Feel The Rhythm and some lovely sentiment from Victoria based Canadians Loving. We also feature the contribution by Sophie Allison’s Soccer Mommy to the horror film The Turning, a surprise new single from Kevin Krauter and the raucous pop of Basic Plumbing.

There were some wonderful tracks released in late November too. One of the best of them is the emotionally intelligent ‘Boundary Line’ a stirring and empathetic track tracing familial memories from Craig Dermody, the Adelaide born frontman of Melbourne based trio Scott & Charlene’s Wedding. It’s from their new EP When In Rome, Carpe Diem.

And from a stellar set of tracks from earlier last month comes Norway’s Lilla Parasit & London based Brooke Bentham.

Tracks by dielines, Health&Beauty, Drauve The Me In You, Fran and Sands can now be found in the Tracks of 2019 Series: Pop/Rock version (see below).

Access and follow this playlist below or here. Every track featured in this list during the year can be found the Pop/Rock edition of our Tracks of 2019 Series playlists here. There’s currently almost 900 tracks extending out to 50+ hours to enjoy so there’s bound a stack of tunes everyone can enjoy. We’ll also be sharing our favourite 30 Pop/Rock based tracks of the year in the next couple of weeks so look out for that.