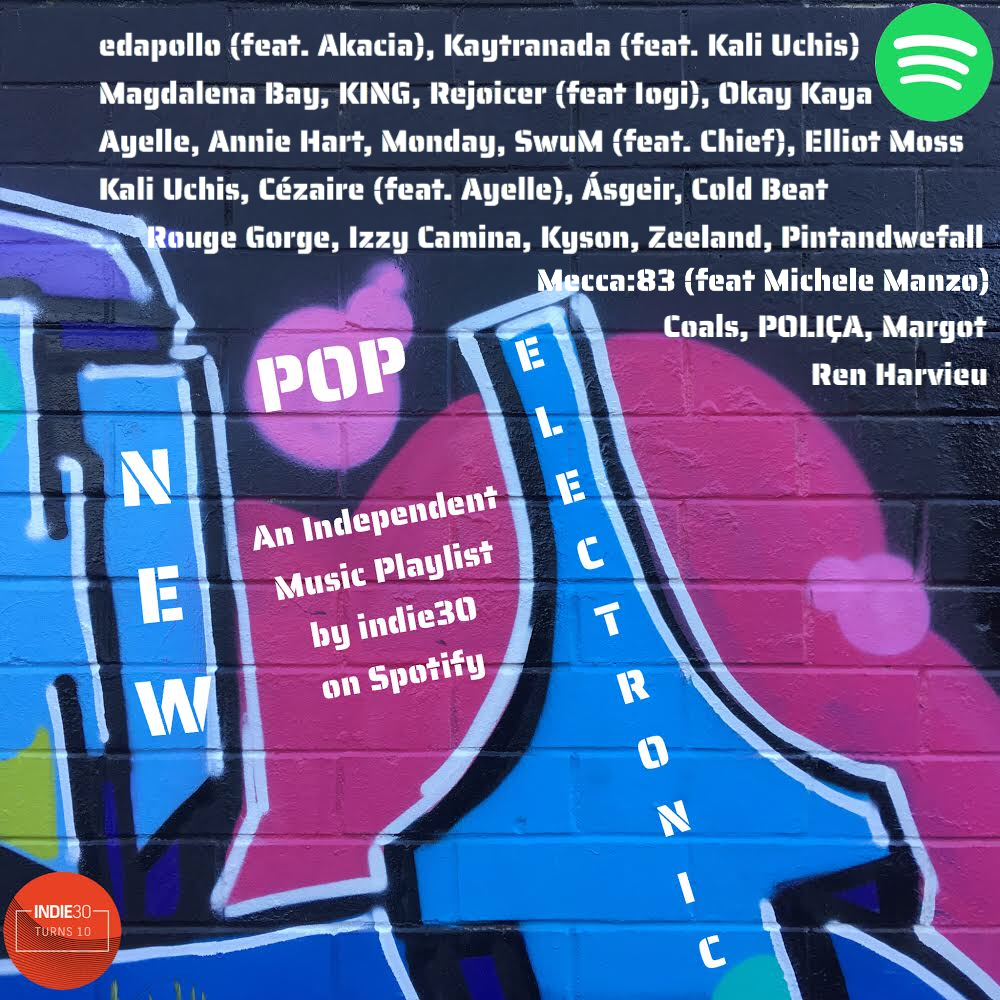 UPDATE: Just added the subtle and instructive ‘Right Track / Wrong Man’ by Christchurch pop quartet Yumi Zouma. The new single was released last week to coincide with the announcement that they have signed with US label Polyvinyl so expect new material next year

Having dropped our final Pop/Rock and Folk/Country/Singer-Songwriter playlists on Spotify for 2019 during the week, our attention today turns to bringing you the final New Electronic Pop Playlist update for the year. It begins with the sultry gleam of ‘Gold Light’, the new single by Melbourne based electronic producer Ed Bidgood aka edapollo featuring the hushed vocal tones of fellow Melbourne artist Akacia. Haitian-Canadian DJ/Producer Louis Kevin Celestin aka Kaytranada enlists American artist Karly-Marina Loaiza aka Kali Uchis for his new single ‘10% ‘ in her first of two appearances in this list. Los Angeles duo Magdalena Bay show the power of their pop sensibilities on their new number ‘Oh Hell. Cuban-American artist KING returns with the sprightly ‘No Hablo Inglés’.

Tel Aviv duo Yuvi Havkim aka Rejoicer and Yogev Glusmana aka iogi have teamed up again for the invigorating chill of the delicately poised ‘Up In Flames’. The defiant and joyous ‘Asexual Wellbeing’ comes from New Jersey artist Kaya Wilkins aka Okay Kaya. London based Swedish-Iranian artist Ayelle, goes full Spanish on a recording for the first time for her spartan rework of Bad Bunny and Drake’s MIA. The Spain raised singer returns later in the playlist with Paris artist and label owner Cezaire for their new single, ‘The Answer’. New York City artist Annie Clark, one third of Au Revoir Simone rounds on our catastrophic climate change causing consumer culture and does her little bit about it on her new single ‘Longing To Care Less’. The video debuted courtesy of Oxfam — watch it here.

Lisbon artist Cat Falcão aka MONDAY dropped a mighty fine new single called ‘out-in’,  the second to come from her forthcoming EP, Room For All due in February 2020. The crackling wonder ‘Lost In Flight’ comes from New York City’s SwuM with some help from fellow chill hopster chief. Elliot Moss channels James Blake on his new single ‘Silver+ Gold while Kali Uchis returns with her own new single ‘Solita’. ‘Lazy Giants’ is the first single from Icelandic singer-songwriter and musician Ásgeir‘s forthcoming album Bury The Moon out next year on February 7.

Grass Widow’s Hannah Lew who leads California’s Cold Beat, wrote her new single’Flat Earth’ while she watched wildfires take to her US west coast state last year while at the same time listen to the incredulous and criminal right wing garbage denying the link between climate change and natural disasters . The vaudevillian motorik of ‘Un Jour Plus Vieux’ comes from Rouge Gorge, the project belonging to left field Rennes artist Robin Poligné off his album of renewal Rene released last week. The dark electro stomper Up N Down is the new single from Los Angeles artist Izzy Camina, The positivity emanating from One & Other comes courtesy of Melbourne artist Jian Kellett Liew aka Kyson while the lo-fi synth pop of a ‘Show Me’ is from Amsterdam/Los Angeles duo Zeeland.

The poignant ‘Ah-Ah-Ah’ with its stirring lead vocal and nigh on perfect backing harmonies is the first single to be lifted from the upcoming 6th full length record by veterean Helsinki left field pop quartet Pintandwefall. ‘Love Is The Answer’ comes from Manchester producer / composer Mecca:83 joined by Michele Manzo on bass. The dark off kilter ‘Sleepwalker’ comes from ….. Coals. New music from Minneapolis synth pop outfit POLIÇA with the dramatic ‘Forget Me Now’ while the soulful Yes Please comes from Greater Manchester based artist Laura Maria aka “Ren” Harvieu.

The remaining tracks were released in November from Love You Later, Margot, Tokyo Tea Room, City Park, GOLDEN, Alice B.

Access the playlist below and for all 900+ independently released tracks featured in our Electronic Pop Playlist during the year check out our Tracks of 2019 Series: Electronic Pop here and further below that. More on that later. If you like these playlists, keep up to date with the latest by adding them to your own.