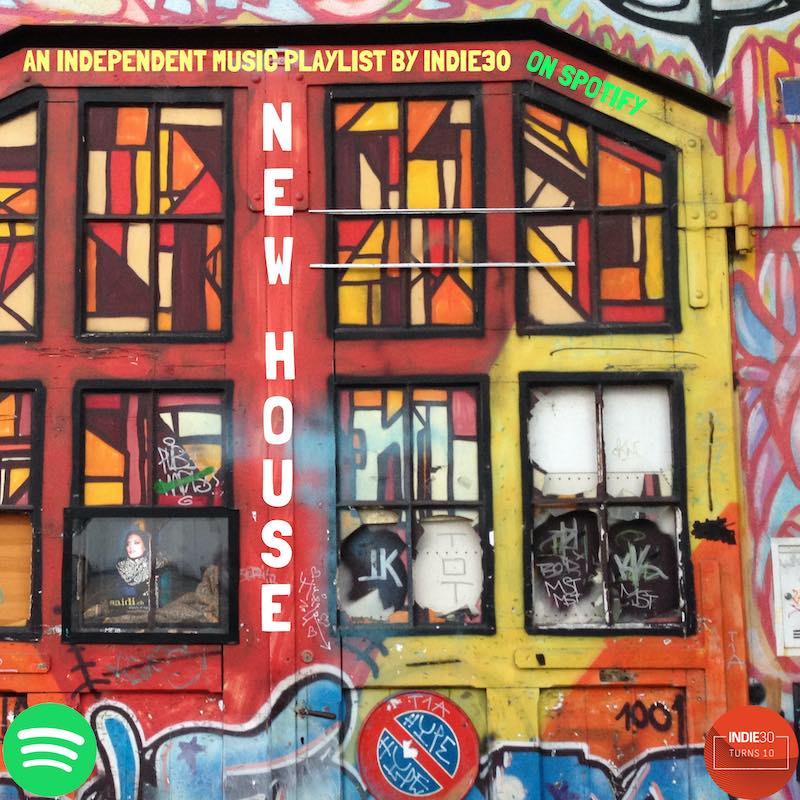 This article and the music described therein has been slightly altered twice from its original incarnation. See below.

Today, sees our New House Playlist get the penultimate makeover for the year with Techno only to come. It’s quite a makeover as we’ve turned over every one of its 30 tracks to squeeze in every bit of New House goodness about the place from over the past month – and made a forced alteration and a few changes in track order for mixing purposes since it was published yesterday beginning with a change of lead track. We begin with The perfectly put and perfectly produced ‘No Couture’ comes from the collaboration between Ozgood, member of San Francisco based dance collective Afrolicious, and legendary DJ/producer/vocalist Sa’d Ali of Parliament-Funkadelic and FSQ fame. the lean, glitchy and functional ‘Tek Houz’ follows from DJ Haus off his new excellent EP Modul8 for Unknown To The Unknown. Yes, a play on words and essentially Techno with a sprinkling of House but definitely not Tech-House. I pretty sure that was the point. English artist/producer and label owner Cassy continues to bring the old school to proceedings with a new two track EP A Place For Us. We’ve plumped for its hypnotic and jacked up B side ‘The One’ to share here. Cassy’s vocal is darling. The spacey groove of ‘Mind Bin’ comes from Irish producer Rory Hamilton aka Hammer from his new EP Marble Arch for Percolate. The spatially enveloping and dance-floor ready ‘It’s Time’ is from Italian duo Emiliano Nencioni and Giacomo Godi aka Supernova, their new single on Downtown Underground. The slow cookin’ title track ‘Mantra’ is the title track on the new Get Physical EP from German pair Lars Rühlemann and Sven Fröhlich aka Monkey Safari.

London based DJ, producer and founder of record label and DIY art collective femme culture Eikka has chimed in nicely at the end of the year with her effusive and inclusive five track EP Every Body Is Welcome and the uplifting title track is a more than appropriate starter given the culture and world we want to live in. The sublime elasticity of ‘Spring’ comes from Rise, the diverse new EP from Frenchman Dj Steaw the first of two releases from his own Rutilence Recordings in this playlist. The other is from co-owner Gunnter (see below). Aforementioned Paris based producer Gunnter brings a nice mix of atmospheric dub and funky bass to the table with ‘Up & Down’ from his new EP CDA. The horizon inducing ‘Sanya’ with its effortlessness on the one hand and its industry on the other comes from Berlin based producer SJ Tequilla off his four track EP of the same name for Craigie Knowles. Simultaneously stratospheric and grounded, ‘Dance Elevator’ comes from Munich DJ/Producer Schegg off his recently released EP Dream Emulator for clippart. It’s his second release for the Melbourne label who delivered no less than 33 cutting edge releases in total during 2019 from all corners of the globe. clippart. for House label of the year? (UPDATE: just caught this Facebook post by COMPUTER DATA on being virtually unpaid and ignored by the label for his excellent 2018 EP Emotional Shift featuring the amazing ‘Healing’ — oh dear…)

Getting the deep house flowing for a few tracks is the pulsating ‘Bunde’, the A side to the new EP Bunde & Bullerengue from Panamanian brothers Lloyd and Kevin Keene aka  K.E.E.N.E. Three quality deep house cuts from Dixon & Âme’s Innervisions then follow off three recently released EP’s. They’re led off by the super smart ‘Fool’ from Swiss artist/producer Jimi Jules from the EP of the same name and second for the label in 2019.  Trikk then follows with the adventurous ‘Ardente’ from his new Facas EP while the bulbously bright beauty of ‘Fragmental’ is from the EP Vokabularium by Danish DJ/Producer Denis Horvat. Replacing Karim Sahraoui in the mix is the French underground house producer and DJ Larry Quest with the deep and rambunctious closer from his variously styled debut vinyl EP on Delusions of Grandeur, Conan Drums. Sporting a silky smooth bass line, ‘Dancer’ is the title track from an EP originally released in late August by Canadian producer Ian Wyatt aka Local Artist. It’s now available for streaming so the Southern Hemisphere can enjoy the summer feel.

From Prague comes the exquisite ‘Flight’ from the dub infused From Pilsen To The Moon, the new EP by Czech duo Midub out on Krmelec. The neatly straight yet inventive ‘Here 4 You’ is from Icelandic producer Intr0beatz from his new EP Breath 4 You on Lisztomania. Underlining Toronto DJ/Producer Stacey Sexton’s versatility ‘Necessary Desires’, the title track from her new two track EP is currently in our New Techno Playlist. Its companion piece, the glassy nocturnal jam ‘M’Excite’ is here. The heavenly ‘Sharing Angels’ is one of four classy cuts on RD², the new EP on We Play House from the legendary pairing of Reggie Dokes and Red D. The playful and gorgeously groovy ‘Gonzo-Bossa Nova’ comes from Polykarp, the brand new full length on Nang from Ljubljana producer Igor Skafar aka Ichisan. Mirroring that familiar Sunday hangover is the scattered and off-kilter ‘Sunday’ from the collaboration between German pair Christian Burkhardt and Andre Buljat. We then up the tempo in preparation for a rousing finish with the gleaming depth of ‘Come The Morning’, the title track on Berg from the collaborative single by Malin Genie & Selidos.

The golden haze of ‘Dedicated To The Crispy’ is the opening cut by Gold Coast producer Dj Whipr Snipr from his new four track EP for Nerang, Get Out of My Head. From the deep freeze of the Eastern end of the Baltic, St. Petersburg producer Maruwa borrows from that Queensland sun and transfers it to her subtle and breezy old school number ‘On My Mind’, the title track off her new EP for Lobster Theremin. The simultaneously diminutive and enveloping ‘Feeling Cosy’ comes from You Can Try This, the ultra impressive four track EP from French artist and former CONCRETE resident Sweely on Distant Hawaii. The at the ready sun kissed elasticity  ‘House Plants’ is by Melbourne producer Tom Bruce, one of five quality cuts you can find on the third compilation EP from Local Action Records. We then bring things home with two classic Chicago house bangers. The first is the focused new single ‘Dancefloor’ by Japanese producer Tomoaki Yamashita aka AFAMoo while the mysterious Saturday Night Rush complete proceedings with their old school 90’s cut ‘Groove Me’ from the excellent Open EP on There Is Love In You.

*This post and playlist have been slightly altered from their original version and incarnation. Tracks removed from Mr G., Grant and See Other can now be found along with every track other track featured during 2019 in the Tracks of 2019 Series: House edition here.  More on that shortly.

For reasons unknown Faith by Karim Sahraoui has been removed from Spotify.

Access and follow this New House Playlist below as it continues its quality selections into 2020, the last year of the 21st Century’s second decade. Had to get that in…