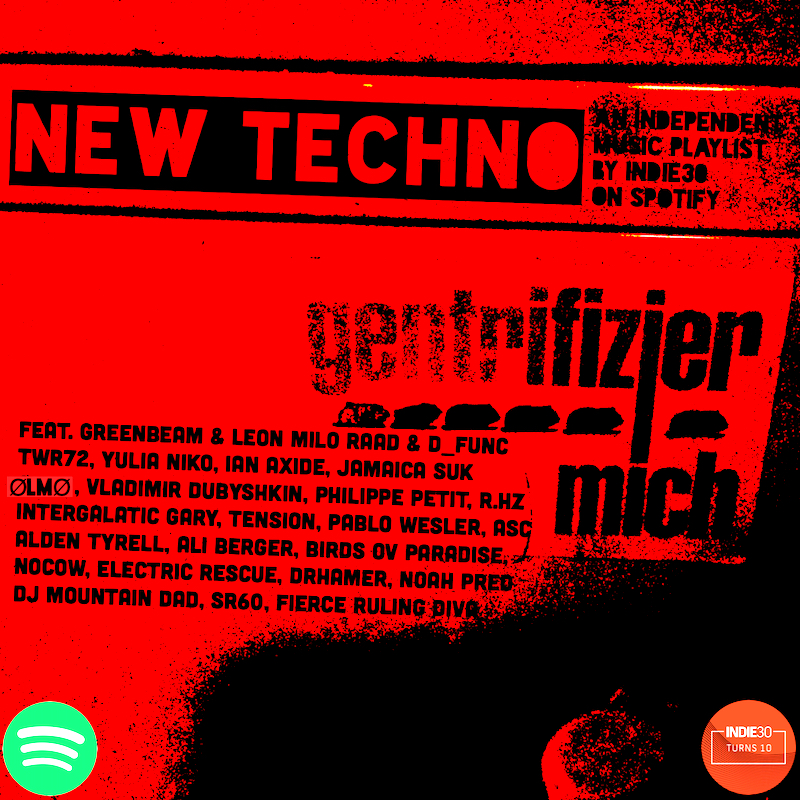 Tbilisi dark techno pair Greenbeam & Leon get our last New Techno Playlist update for 2019 underway with the menacing ‘Disobedience’, off their new EP The Haze of Dust on ATT Series. It’s an appropriately apocalyptic statement to open a techno based playlist and mark the end of what has been morally and ethically, another repugnant year for a species who should know better.

With regard and care for social and economic justice and human rights ever waning, human governance under corporate and capital control has become primarily concerned merely with aggrandisement and accumulation. Technology is not a tool for forward thinking progress but of defence, security and surveillance. Taken together with the lack of anything close to the action needed on the human induced climate emergency, put quite simply the year’s been diabolical.

Music and art is more often than not an artistic impression or representation of the society in which it was created. One need only take a quick look at the dark, bleak and foreboding themes and titles characteristic of many underground techno releases to to know a critical eye has been cast and set. The disdain that a lot of artists, producers and DJ’s in this sphere feel about the dire state of the world and the inability of human beings to build cultures and systems not based on fear, lies, envy and avarice is palpable.

The reverberating and equally dark ‘Irrational Fear’ continues that critical trajectory and comes from Serbian producer Milo Raad and his English counterpart Alexander Kowalski under his non de guerre here as d_func. It’s from the EP of the same name on Northallsen. We then put the foot on the gas for a few tracks starting with the on point ‘Cry’, which melodically intertwines two echoed beeps and surrounds it with 135 bpm percussion and aquatic cylinder like synths comes from Dutch pairing TWR72 off the fifth edition of their Archive series. The no-nonsense serious groove of ‘Sound Factory’ comes from Russian born Berlin based DJ/Producer Yulia Niko. It’s from her new EP I Was 5 in 1995 for Elevate. Also based in Berlin, Jamaica Suk delivers the relentless rattler ‘Road Between’ from her new EP Dreams of A Distant on her own label Gradient. Ian Axide takes absolutely no prisoners with the functionally hypnotic ‘Anxious’ the title track from his new EP on Children of Tomorrow. Spaniard Olmo Gomez aka ØLMØ then delivers the sonically stunning and ultra focused ‘Migrane’ from his new EP Stress on Ninth World. Vladimir Dubyshkin rachets the pace up to the 140 mark with the excellent vocal driven ‘Customs & Traditions’ from his new EP Budni Nashego Kolhoza on Trip.

The remaining tracks across the playlists first half come from Belgian Phillipe Petit with the expertly sculptured ‘Pressure Sensitive’ from his two tracker for SYCT ‘SPC003’, Naples producer  Giri with the transportive title track ‘Autochrs’ from his EP for AWRY. The gleaming 3am cut ‘Step On The Edge’ comes DJ Mountain Dad, the new alias of Lobster Theremin owner Jimmy Asquith, Chicago experimentalist Kobe Dupree chimes in literally with the left field ‘Normcore’ of the excellent Subjective Truth for Double Vision. The acid tinged ‘Perfect 10’ is the title track from German producer S-File’s new EP. Out through Traumraum, the tidy ‘Flatten Doubt’ is from the four tracker Soft Science from Canadian Noah Pred,

Wellington stalwart Intergalatic Gary then takes halfway point duties mixing things up nicely with his deliberative and spatial 112bpm stomper ‘Mystified’ from his new EP Signs of Disarray. We then head into deep techno territory with ‘Calm’ from Moscow producer R.Hz  off his self released five tracker Watersky. German producer Tension then follows with the pensive ‘Deform’ from his new EP Conquest on Illegal Alien. The patterned rhythms of ‘Rec n4’  is off the KYS EP by Italian producer SR60, part of Black Chrysalis Records Embryo series. Spanning 84 minutes, Let Electronics Evolve Freely is the debut double album from Buenos Aires producer Pablo Wesler, From that comes the eerily relentlessness of ‘Black Times’. Released on Tra-Ma, the Lisbon label belonging to Robert S. The alienation continues with the enveloping ‘Cytosine’ from Californian based Brit ASC. It’s off his new album out called Realm of The Void, the second in his Realm series through his own label Auxillary.

The heightened blare of ’31 Seconds’ is from the new two tracker of the same name on Reload from UK Producer Drumsauw .Long standing duo from northern part of Ireland Loco & Jam bring some invention and subtlety to the “big room” with the also rather dark ‘Aerocell off their new EP Cell Structure for Octopus. The engrossing ‘Sherman Paradox’ is from Vorm Varieties 2, the second instalment in a series of five from Dutchman Alden Tyrell based on classic techno elements. It’s out through Rotterdam’s Clone. Speaking of classic techno, American Al Berger filters his inventive treatise on modern life ‘Anxiety’ through a fusion of classic Chicago and NY house insertions on his new 12″ ‘Raise/Anxiety for Southern Belle.

We then bring it back down, dark and circumspect a little in preparation for the run home with the ponderous self examination of ‘Who Are You Really’, 14 minute mind fuck that looks into the deep and dark recesses of the self. It’s the result of the collaboration between Swedish dj Producer Sebastian Mullaert & Markus Clemmedson aka Boelja and comes from part two of their ‘Who’ EP on Hypercolour. French producer and label owner of Skrympton Records Electric Rescue completes his superb nine track Archaos double EP for Volphonie in rhythmic desolation with ‘Windy Landscape’. Things get a little lighter with the meticulous sounds of the debut EP Swedish dub and minimal producer Birds ov Paradise. Originally released in 2016 by Gothenburg label JENS, now its available on streaming services for the first time. ‘Sound & Color is the second track to feature in this playlist after the sublime Bitter Sweet Sour. The adventurous minimalism of ‘Far Voices’ come courtesy of Nocow, the project of versatile Saint Petersburg-based producer Aleksei Nikitin  . The inducing power of ‘Too Far’ is penultimate in this playlist and comes from the Multiverse EP  from Italian producer Patrick Puccetti aka Drhamer . The pace is the perfect lead in to the raw, mischievous and thought provoking ‘Woman Like Man’ from long standing Amsterdam duo Fierce Ruling Diva.

To continue to access quality new techno like this press play below and scoot over to Spotify and activate the follow link. This is the final update for 2019 but this playlist will continue to be updated with quality releases right across the summer/winter break. And look out for our last post of the year where we present the last of our the Tracks of 2019 Series: Techno.

Despite the state of the world, we’ve always got our music and our art. Enjoy!